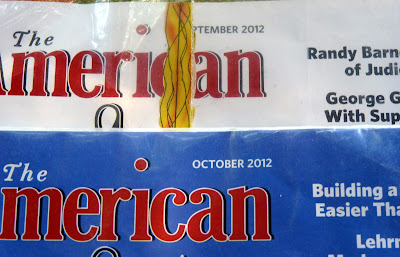 One of the joys of living in a small town for a few years is the daily trip to the post office.

I suspect the ritual is the same for village life in England, Honduras, or China.  Check the box for mail.  And, more importantly, chat with the postal clerk about the latest goings-on in town.

What Agatha Christie novel would be worth reading without a similar plot-propelling scene?

Even though our temperatures are still past 90 degrees before noon, I decided to walk to town yesterday -- to enjoy this little town of mine.

And it was a bonanza day at the post office.  All three clerks were there.  Each with interesting tales.

We talked about the universal topic of the weather.  Car wrecks.  And my upcoming trips to Pátzcuaro and Oregon.

Even my postal box held more mail than usual.  Two magazines.  Well, the September and October editions of the same magazine.

As a blogger, I have been quite a booster of the Mexican postal system.  It is usually very reliable.  Certainly as reliable as the high-cost postal services used by some expatriates.

But,now and then, something odd happens.  It usually takes about 10 to 14days for mail to be delivered from up north.  In July, I sent off a pack of cards and letters -- both to Mexico and The States.  It took six to eight weeks for the mail to be delivered.

And we all know the story about my subscription to The Economist.  It arrived fine for a few weeks.  And then just stopped.

Now, the odd delivery of different issues on the same day.  I have no idea what happened.  And I am not concerned.  At least, they arrived.

One thing I have learned in Mexico is that getting in a lather over a few late magazines is not worth the bother.  My focus is on the fact that I will now have something to read on the bus on my way to the hotel in Morelia.

It is certainly not the end of my world.

And my conversation at the post office is always worth far more than what shows up in my box.

You beat me to it!

Either THAT or the "universal topic of the weather" consisted of, "Mucho hot-o no?"

Our conversations are a combination of English, Spanish, and Marcel Marceau.

And, of course, props from the postal box.

My Spanish consists of a list of nouns.  There are no verbs.  In my Spanish world, there are many things -- all capable of doing nothing.  But we have fun talks.

Felipe -- You would have been proud of me this morning in the post office.  The clerk told me to go to the plaza this evening.  The local students are building Night of the Dead booths.  We had several exchanges.  All in Spanish.  Extremely basic on my part.

Honduras? Pardon me. We have a postal office system that exists only in theory for the most part. People in small towns do not visit the post office. There's nothing to pick up or drop off. When I lived in a small town in Honduras, the electrical and water bill were thrown in the window. We knew the phone bill was due when the dial tone no longer sounded. Glad I dropped by to clear up any misconceptions of the friendly postal worker in Honduras. They live vicariously on the innards of the occasional package sent by unwitting foreigners who ship things to relative and friends.

Honduras has no functioning postal system in the country or the city. Postal stations exist for the sole purpose of the workers to receive a salary and the occasional contents of misguided packages. When I lived in a small town, the utility bills were thrown into an open window. Or not.

There are tales that the Mexican postal service had a similar reputation.  I would now trust the Mexican service with anything.

I have received one letter in all my time in Honduras via the postal system. It was for someone else not me. For the guy who lived there previously. All other bills are delivered by the company. Or not.