i never do anything twice

And some things I have never done once.

Tuesday was the day I marked at least one thing off of my list.  The list of things I want to do before I die -- even though some of the activities could easily result in "GAME OVER."

This was one.  Sorta.

I have never ridden on or piloted an ATV -- an all terrain vehicle.  Those four-wheeled vehicles that pre-teens use to terrorize sunbathers on Mexican beaches.

There was no reason for not doing it.  My house sitter is a big advocate -- having had one in his youth on the family farm.

It turns out that its ride is a cross between a motorcycle, a wave runner, and a horse.  And I long ago mastered all three.

Last week, I saw Ray Calhoun of The Only Tours at Rooster's restaurant late last week.  We met about three years ago while my neighbor (at the time) and Ray were figuring out exactly where true north was on the beach.

I really do not remember why that was so important then.  But it was.

I would then see Ray on the beach or guiding one of his ATV tours through the back roads of the Costalegre.  But I never had taken the time to set up a tour for myself.

When we talked last week, he told me he was heading out on Tuesday to scout the streams and roads before this season starts.  I invited myself along as a paying customer.

Let me give you the bottom line.  I love ATVs.  And I love the challenges Ray offers on the trip.

We were gone for about four to five hours.  Riding on beaches and back roads.  Fording streams.  Climbing landslides from our summer rains -- slides that I could not have climbed on foot. 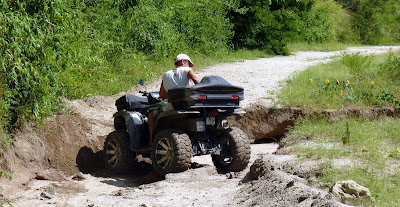 You heard me go on and on about the scenic vistas of Michoacán.  Where there is a stunning sight around every corner.

I have slighted Jalisco's coast with my prose.  This is a view in the hills looking south toward Manzanillo.   When this place greens up, it makes Greenpeace look like minke harvesters.

Unfortunately, when you have one hand on the throttle and both hands on the brakes while dashing through shifting sands, it is difficult to get good shots.  As you can see.

And that is too bad.

We passed through clouds of tiny to large butterflies -- as if we were in a Mardi Gras parade surrounded by blue, white, yellow, organge, brown, and black confetti.

Gray hawks.  Turkey vultures.  Lizards.  Snakes.  And birds I have never seen before.  All on the back of a steed that could take us almost anywhere our dreams could imagine.  We went down trails Ray has never explored before.

And I think this is the first time I have seen the Mexican and Red Chinnese flags flying together at a business complex.  It turns out it is a joint venture mine.  The locals in Tequesquitlán say it is an iron ore mine.

That makes sense.  It is in the same range as the Peña Colorado mine on the road to Colima.  If I remember correctly that mine is a joint venture with the British.  It is almost as if both Guadalupe Victoria and Porfirio Diaz were still setting policy in Mexico City.

But there may be more than iron ore in them thar hills.  Our local source lowered his voice and got that Hispanic glint in his eye -- the same look that propelled Nuño de Guzman through the highlands.

"They say there is -- gold."  The perfect opening line for a short story.

But we were not in a short story.  We were on another of those adventures that make me as giddy as a school boy.  At least, until the adrenalin has burned off with what is left of my testosterone, and my buttocks start telling me it is a long time since I sat a saddle.  That hot tub would have been welcomed last night.

I want one.  An ATV, that is.  If I get that house in the country, it would be a perfect fit.  Something more to tie me to Mexico.

Unlike the area around Lake Pátzcuaro, the roads and fields around Melaque do not have banks of fall wild flowers.  But the mountains do.

Not the pastel pinks of Pátzcuaro with its cosmos.  These flowers are boldly tropical.  Oranges.  Purples.  Reds.  Blues.  Yellows.

Nothing subtle.  But I could not help but notice this flower (whose name I do not know) is certainly close kin to the cosmos.  As leggy as a Las Vegas chorine.  But in a brighter costume. 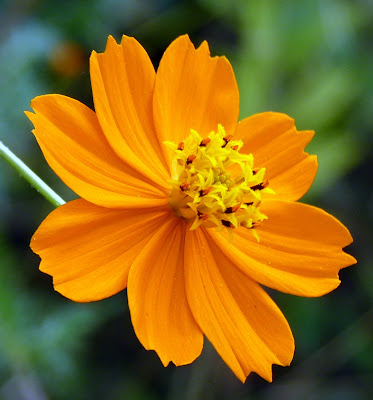 It seems that all good times eventually meet, shake hands, and become one.

For your own adventure, you would be well-served to contact Ray when you are in town.

I intend to take a few more runs myself.

ATVs (otherwise affectionately referred to as three or "four-wheelers" back on the farm) were such fun as a kid.  Fun which both kids and adults can equally share.  As surprised as I am that you've never ridden one before, I'd have a hard time imagining a life on the Mexican coastline (with nearly unlimited countryside to roam) without one.  It would certainly add a whole new level of actual danger-ensuing adventure and just the right mix of transportation meets exploration to your life that you could not experience hiking or driving.  Hiking doesn't get you very far, driving doesn't allow for quick stops and photo ops.  ATVs are the best of both worlds.  I only wish we had more land at my parents place to enjoy the one they have.  11 acres is generous for in-between towns, but quite quickly traversed even with those glorified power bikes.

As a teen, I enjoyed driving my dad's ATV's. I was just thinking last weekend I want to ride one again. Or even own one. They are endemic to the Honduran countryside.

Where we lived on a wooded ridge in the Arkansas Ozarks, some of our neighbors had their 4 year old kids driving an ATV. I view that as rehearsal for living in Mexico.

Much maligned by a good percentage of the blue haired crowd, the ATV is one of the best ways to get FAR away from it all. I love to hike but I cant beat the distance of the quad. You need to buy at least two, one for you and one for the gardener/chauffeur; just sayin..

How fun! I've been wanting to take that tour.
I heard they are pretty scarce to find, many people have the same idea as you, to buy one.

And very practical for quick trips beyond walking distance.

Speaking of nostalgia, I saw a grandfather with two of his young grandchildren in his lap "helping" him drive his pickup -- and creating memories for them like my dad did for my brother and me.

On yesterday's trip, I was thinking just how much fun it would be to regularly get out into the countryside.  It is almost like discovering a completely new world around me.

They are scarce.  Some are imported directly from The States by the recurring tourist crowd.  But they can be found down here -- for a price.

Yesterday we drove to villages I have never seen.  And, of course, places I could not get to in my Escape.

I have grown that flower here in Calif.  Definitely a species of cosmo. You have a good eye.

As long as the ATVs stay on established trails and are not destructive to the environment, have fun.

I remember feeling that way when I took a kayak trip down the Willamette. I just kept thinking, "Does anyone else know this was here?"

Another reminder of how much joy surrounds us in our daily lives.  If we could only get that pesky work stuff out of the way.

One of the beauties f Mexico are the number of trails that exist -- or are just a step away from being made.  I have a whole new appreciation for farmers in the jungle.

I hope I have two good eyes.  On the other hand, you may have spoken with my optometrist.

Oh,Oh, I can see it now.....maybe they have those lightweight casts for your arm and wrist......

I've never driven one of those babies either. Looks like fun. I envy you.

we've done quite a few bicycle trips around the country side, including Pinal Villa, the back side of Jaluco and El Aguacate through mango, banana and orange groves, pineapple and jalapeno fields, ATV trip is also still on our to do list....Let us know if you go on another trip with Ray and we'll probably join you!

The village of Cuestacuamote is full of farmers with them.......When I was in that area last Jan and Feb, the goat farmer came every day to check on and feed the goats.  And, often to put them back inside the fence.  I could hear him coming.  He always waved.  So did his kids and wife if they ALL were on the ATV.
Many expats here have them........easier to park then a car.  But here they have to be licensed and inspected and everything else - plus a helmet just like a motorcycle.
GLAD you had so much fun!

We've ATV'd with Ray the last two years. He's a great guy, very knowledgeable re. the countryside, it's plants and animals and history. As you say Steve, it was like being a kid again except there were no vehicles like ATVs when I was young and by the way, look for "strong and free"...... voile, that's true north! Hopefully we'll see you in Jan.

You brave hombre you!  I always wanted to ride on on the dunes near Florence, Oregon but that's sand my friend much nicer on the kidneys.
Glad you did it, and you are here to write about it,  Didn't notice your writing jittery of anything,  way to go!!!

And I would gladly do it again.

I look forward to it.

We have all of those requirements, as well.  But our part of Mexico simply notes that a regulation exists -- and then we all go on with our lives as if it did not.  The trick is either to avoid -- or ignore -- the traffic wardens.

Almost as good as a motorcycle.

I also found a good source in town.

Or leg.  When Ray found out I was a motorcyclist, he warned me not to put my foot down (as I would on a motorcycle to steady it on the oblique).  He pointed out how the rear wheel would tear up my leg.  Made sense to me.  But at least five times I instinctively took my foot off of the riding rail.  Fortunately, to no bad effect.  But that was almost exactly the scenario where I ended up with a broken right ankle while ziplining.

Oh my gosh, that sounds like SO much fun!! I really want an ATV but they are very cost prohibitive here. You could buy a car for what they want for one of those things. And Barbara, I wouldn't even care about the licensing or the helmet if I could afford one!

It was beyond fun.  They are a bit spending.  But I just looked at the price of buying a new Escape (with the amenities of my current one, but without all the dirt).  $36,000!  I thought I had been redirected to the BWM page.  It made an ATV look like a bargain.