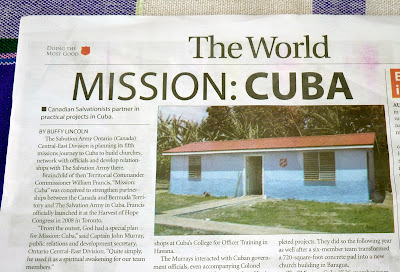 Let me be the first to fire a shot across my rather erratic bow.

I know I have spent the last year acting like a man who is uncertain where he should be.  My trips -- almost circumnavigating the globe.  Elegiac essays on the virtues of San Miguel de Allende.  And Morelia.  And Pátzcuaro.  Houses to strum my heart strings.

And now.  Something else.

Late last week, I received a slightly-dated New Frontier -- my Salvation Army newspaper.  I usually flip through it quickly.  But a headline on page 5 stopped my browsing.  "Mission: Cuba."

A group of Canadian Salvationists has sent building teams to Cuba the last four years.  But the details of the story were not what had attracted my attention.  It was that headline.

In the spring of 2001, my law school alumnae association sponsored a trip to Cuba.  It was one of those cultural-legal education trips that once attracted academics to countries on the east side of the iron curtain.

A Cuban friend of mine contacted a relative in Cuba -- a minor Communist Party functionary -- to ask him if he needed anything that I could bring along.  Yes, he said.  A Volkswagen muffler.

He then asked why an American was coming to Cuba.  She told him -- for a law conference.  "A law conference?  In Cuba?," he laughed.  "Isn't that a little like attending a chastity conference in Gomorrah?"

I stuffed the muffler in my suitcase.  A suitcase that contained only one change of clothes for me for my week stay.  The rest of the suitcase was filled with Salvation Army uniforms that I smuggled to Havana -- the Castros were not very fond of the importation of any "clerical" garb.

In between my law conferences, I spent a good deal of time with the Salvation Army officers in Havana.  The husband was the son of the officer at the Havana corps during and after the revolution.

A week was enough time for me to realize that I wanted to return to Havana to work with the Salvation Army.  History had another idea.

Six months after my Cuba visit, terrorists leveled the World Trade towers, and the licenses to visit Cuba were almost completely closed off.  When I retired, I looked into moving to Cuba.  I could get there.  But my money couldn't.

The Cuban Salvation Army has plenty of hands.  What they need are funds to do their work.  And the absurd embargo on Cuba keeps that from happening.

Instead, I came to Mexico.  But that headline -- "Mission: Cuba" reminded me I once had a mission different than the one I am on now.

The Salvation Army is currently taking applications for its mission to Cuba in 2013.  I would be interested in participating.  There would be massive political problems to overcome -- not being a Canadian citizen, for instance.  But I am going to give it a try.

And if this is not the trip, there will be others.

Something for me to include in my prayers this Sunday morning.

I have gotten so comfortable here with my nice house and easy life in Mexico that at times I wonder what happened to all my other dreams.

I've been doing that sort of thinking more and more lately. I think we're on the same wavelength in that regard. Sounds good, Steve.

It may run counter to your basic political instincts but if you want to facilitate a trip to Cuba you should pray that OBAMA gets reelected. Chances of the insane US ban on travel to Cuba being lifted are much better under a second O administration than under Romney. I know, you may have to hold your breath and concentrate really hard during those prayers.

I moved to Mexico because I was getting far too comfortable in Salem.  I wanted to live somewhere where I had no idea how I was going t get through the day when I woke up.  For a while,Mexico fit the bill.  Now, I am almost as comfortable here as I was in Salem.  No one has ever said living in Cuba is comfortable.

Such a move may prove to be impossible under the Castros.  But I want to at least look at the possibility.

You make a very good point.  But one thing I learned long ago in politics is that the unexpected is to be expected.  Nixon in China?  Who would have thought it?

The big problem, of course, is the Castros.  Someone with my background and stated mission would not be high on the party's list for an extended visa.

The times in my life when I felt most alive have been when I was least comfortable.

I believe the key to the fall of the regime in Cuba, aside from the death of Fidel, is to open the floodgates of Americans to this failed state. Our capital, our compassion, our Cuba expatriates, even the most non-political, will open hearts and minds to the possibility of escaping the grinding poverty and passivity that grips Cuba today.

Americans have no problem getting to Cuba. Fly from Mexico. The Cubans don't care.

For the short term, that may be the answer.

I agree., Laurie.  The wrong-headed embargo has had the effect of keeping Americans out of Cuba who would have helped Cubans lead a better life.  It is a country just waiting to be part of a productive, free world.

I am filling out an application right now.

Plus, there are all manner of methods (set up by smart capitalists) to ship money to Cuba. I discovered this during my research prior to going to Cuba in April. Get busy on Google.

Or I could just talk to you.

A man who lived in the guest house a few years ago spent a few years in Cuba.  He sailed in in his own sailboat and stayed.  Ultimately he wrote an opera about Cuba which was performed at the Kennedy Center.  The Cuban government honored him with a medal equal to our medal of freedom!  He goes back to this day and says he is able to move about freely.  Bajiogo Travel has taken several groups to Cuba with nary a problem.
If you want to do it, GO.  My son always says, "IF it is important enough, you'll figure out a way".  That saying has changed my life many times.  Wise son.

You really must like to be in uniform! Why not an S.A. post in your current town?

I knew there was a reason I was drawn to you.

The mind flits around with many options, any of which are possible. When the right ones hit their mark, you move on it.

Steve,
from what I know about you, if it is what you truly want, you will achieve it. Everything seems lined up for you to be able to go. You didn't buy a house after all and you couldn't have taken Jiggs with you, so you are free to follow your heart. I am not discounting the pain of Jiggs passing and I don't know if I can put what I mean in words, but as sad as losing him is, it removes another "reason" to not go.
Husband is found of quoting a long involved zen story about good luck and bad luck, it involves a farmer and horse, you can find it in the net.
regards,
Theresa

And, for this project, I can make my own way even if I am not part of the construction crew.  The long range will take a bit more planning.

For some reason, Cuba calls.

I consider "impetuous" to be a compliment rather than a pejorative.

This may be a "one step at a time" goal.  Starting with the short construction project.  We shall see.

Interjet, one round-trip flight daily from DF to Mexico.  About $300 US. Onward Christian soldier!

That was the flight I took in April. Great airline.

I need to start doing some planning.

Sounds great Steve! I look forward to reading your posts when you get there.

We would miss you in Obregon Steve, but this sounds like you. Just promise to keep up your blog and if it ever doesnt feel right....come back.
Michael Fredrickson

It is interesting you bring up the future of the blog.  Cuba has two internet issues.  The first is obvious.  The Castro regime fears the internet as much as the Red Chinese do.  People exposed to free information start thinking like a free people.  What is written is monitored.  The second s not unlike the first.  To better monitor the internet, connection speeds are very slow.

If the American government was smart on its Cuba policy, it would offer top hook up Cuba to the fast speed cable in the Straits of Florida.  Free of charge.  And let the seeds sprout.

To even get there for the Canadian consttruction program may take a bit of creativity.  But I think I am up to it.

You can fly to Cuba from Mexico. You just need your USA passport and a Cuba Tourist card available from the airline. The Cuban anduana (Customs) will not stamp your passport. You can google "anduana Cuba" for all info

The Cuban Internet is slow - dial up but you may fine Wifi in some Havana hotels.

Any info you would need is here:  tripadvisor.com   Cuba

I will apply for a Treasury license on this trip.  Even with a license on e last trip, the Cuban bureaucracy took the same steps.

A point I made earlier about the Castro obsession with control.

Make sure you close on the Barra house first. No need to go to Cuba worry-free.

I hope you fare the storm well.  Who would have thought you would be having hurricanes in Boston while Mexico is having clear weather?