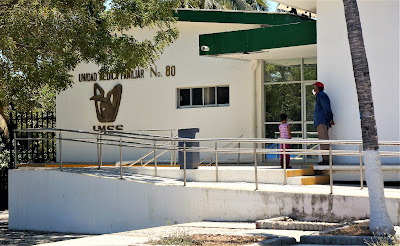 Last February, the Jalisco Ministry of Health opened a test-run virus vaccination program in our county seat of Cihuatlán for people over 65.

Because the vaccinations were seen as an issue of public health, and not individual protection, the government made the vaccinations available to Mexican citizens, holders of permanent and temporary residential cards, and a few (but not all) people with tourist visas.

The program ran a couple of weeks until the Oxford-AstraZeneca doses allotted had been distributed. The Astra-Zeneca vaccine is a bit more efficient with a booster to induce the body to create the greatest efficacy against the virus. That meant, at some point, those of us who were vaccinated would optimally receive a second jab (a tale of two lines).

Upon discharge from the clinic, each of the people who received a vaccination was provided a piece of paper showing the date and type of vaccine used for the first shot. The form also included a date that purported to be the date for the second vaccination.

The young man who discharged me told me the date was approximate and that I would be called with the date and place for my second go. He said he was quite certain the date was not going to be accurate, and he had no idea where the next clinic was be administered (taking the shot).

Either today or yesterday was the day that the second vaccinations were supposed to start. Because I was not certain, I waited until early this afternoon to drive over to the IMSS clinic in Cihuatlán. The photograph tells the entire story.

The IMSS clinic was open for its usual business of treating its policy-holders. I asked the receptionist if she had any news of the vaccination clinic. Years of experience has taught me that receptionists, secretaries, and office clerks know much more about what is happening than do their principals.

Journalists and lawyers are never happy asking one question when seven variations on the question are available. Even peppering her with the same question from different angles rendered the same result. She had no idea when the vaccination clinic would return -- or where it would be.

I suspect to escape my cross-examination, she stopped a passing doctor. His answer was the same. But he did add: "It's not our program."

So, there we have it. It appears the young man who discharged me was correct -- my second shot will not be on Thursday because Thursday was merely an approximate date.

But, we do not know that for certain, either. It is possible the vaccination clinic may spring up at the IMSS clinic -- or somewhere nearby -- tomorrow. Or on Thursday. Or next month.

The only thing I can reliably say is that the vaccination clinic was not at the IMSS clinic this afternoon -- and no one there knows when or whether it will be.

The clinic will need to return somewhere locally. Only a small portion of the over-65 population was vaccinated here in mid-February. And there have been no local subsequent opportunities. Eventually, the team will once again be here.

And I cannot be positive that the team will return for second vaccinations. Mexico ran out of AstaZeneca doses with its initial wave in February. Since then, it has been relying on other vaccines because AstraZeneca has become hostage to vaccine nationalism in India and the European Union -- the countries where it is manufactured. There are very few sources left for AstraZeneca vaccines.

According to The Economist, the Mexican federal government considered relying on studies that one dose of AstraZeneca would provide sufficient protection for herd immunity. The remaining supply could then be used to provide at least one vaccination to the unvaccinated. That would spread out the number of people with some protection.

I have heard nothing further of that plan. Perhaps, because at the end of March, the United States loaned 2 million doses of its AstraZeneca stockpile to Mexico. (Canada was also a beneficiary of the deal.)

Whichever way the policy-makers decide, the rest of us will just need to develop a more-Mexican sense of patience. It is a virtue that will serve all of us well.