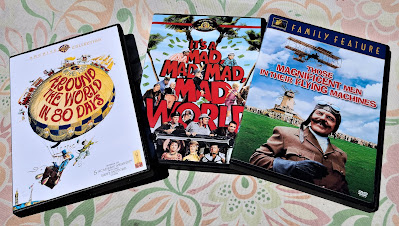 I do not know how I ended up buying them.

Well, that is not exactly true. I know exactly how I ended up buying them. Through push technology.

Amazon is a flawed master at guessing what I might like to buy from the warehouse -- based on what I have bought from the company over the past two decades. The company certainly is not a true prophet.

The good folks in their marketing department have tried to sell me Moroccan robes, home gymnasiums, and, recently, beauty products. Things I simply would not use. (Admittedly, the beauty products were being flogged as a Mother's Day gift.)

But they hit a home run about a month ago. Amazon.Mx must have noticed that I had been buying a lot of DVDs lately. Being an American male of a certain age, an Amazon email offered three DVDs as a special: Around the World in Eighty Days, It's a Mad, Mad, Mad, Mad World, and Those Magnificent Men in Their Flying Machines. I hit the "Buy Now" button without hesitation.

I wish I could tell you why I bought them. My first thought was that it was a case of Old Man Terminal Nostalgia.

I can remember all of the circumstances surrounding each of the films. They help perpetuate our rather-flawed memories that life (and certainly all of us) were far more innocent back then. But I tend to be a little too sardonic to be called nostalgic.

I popped each movie into my DVD player with some anticipation of re-capturing some lost piece of my past. But nothing had been lost. I recited most of the actors' lines along with them.

The only real disappointment in the lot was Around the World in Eighty Days. It was spectacularly-filmed. And Cantiflas, the Mexican actor, was rightfully billed as the star of the movie in most countries. David Niven received top-billing in very few.

There is no real script. The best that can be said for it is that what script exists is an almost-Pythonesque satire of the British Empire.

The movie looks as if Michael Todd shot scenes from around the world and then mixed in vaudeville skits featuring the comedic styling of Cantiflas. In the end, it is little more than a travelog.

And that was the key to why I bought these three movies. They are all about travel. Searching for a prize while taking a journey. The £20,000 bet by traveling around the world in eighty days. A satchel filled with $350,000 as a reward for completing a road trip in California. A prize of £10,000 for being first to fly from London to Paris.

They are symptomatic of my desire to get moving again. Not that I have ever really modified my daily behavior in Mexico or flying to and from Oregon. But the idea of finally being able to get on an airplane and fly to Madrid or Tokyo or Yerevan or Nairobi seems to be getting further away.

The newspaper informed me this morning that the US State Department has increased the number of countries on its "Do Not Travel" advisory list. Last week the list included 34 countries. As of yesterday, 130 countries were added. That is about 80% of the countries in the world. All related to the virus.

The list does not prohibit Americans from traveling to those countries, but it strongly recommends they not travel to any of the countries on the list. In practice, the additions do not mean much because most of those countries already exclude travel from The States -- and Mexico and Canada, for that matter.

Traveling in Mexico is just as problematic. Churches, museums, and theaters open and close irregularly based on whether the area where they are located is enforcing a lockdown. I receive weekly pleas from the two hotels I stay at in Mexico City to come visit. The bargains are tempting.

But I will wait a bit to get back in the saddle for most travels. Why slip into Madrid when La Prada is closed, or fly to Mexico City only to find that the Bella Artes has no productions?

I may simply be satisfied with watching Cantinflas fight bulls in Madrid. It is far better than nothing.