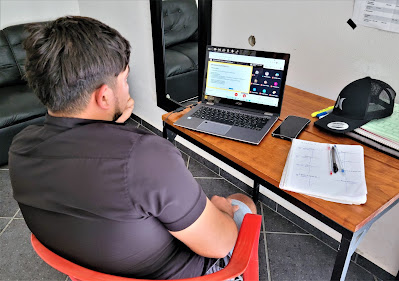 Omar and Yoana are part of the Great International Education Experiment.

As a result of the virus, schools around the world have shut down. And, even though scientists had provided guidelines to re-open schools months ago, politicians, teaches unions, and some parents set aside science in favor of a certainty that never came.

One of the worst effects of the virus has been the effect that it has had on providing education to youngsters. Everywhere, children are at least one academic year behind in their learning. A large portion, having lost the skills learned before the virus, are now at least two academic years behind. In some poor countries, students, especially girls, have left school. Most of them permanently.

Mexico has been equally affected. Locally there was an attempt to teach remotely. But most of the parents I have talked with  tell me their children either have not learned much or they quickly stopped watching televised lessons and submitting their homework.

The loss is great, but not unexpected. Studies have shown, during the shutdown of schools, remote learning is  not a substitute for in-class learning, at least not for primary, elementary, and high school students. At the college level -- where students have more skin in the game, it is far more effective for college students. Online colleges have existed successfully for decades.

And that brings us to Omar and Yoana. Both of them have been accepted at the University of Guadalajara at Autlán. And one day, they will be spending their college months up there. But not today.

Like the rest of the education system in Mexico, in-class learning is extremely limited. Almost all classes are conducted online.

For several hours each Monday through Friday, Yoana and Omar sit in front of the computer listening to lectures and watching badly-constructed PowerPoint displays. Because she is studying to be a lawyer and he is studying to be an accountant. thet do not share classes. But it does mean they spend the full day schooling in his bedroom.

I watched a brief portion of a lecture on Marxism as part of his Economics class. The lecturer was a good teacher. She made Marxism as interesting as anyone can without once displaying her personal views. That is an art.

Omar says that not all of the teachers are that skilled. As would be expected.

His class-load consists of classes in Economics, Administration, Principles of Accounting, Mathematics, Political Concepts, History of the Twenty-First Century, and Technology. In none of those courses does he have a textbook. What he learns is what the lecturer reads. But that is not new. In highs chool he had no textbooks; only workbooks.

I was curious how homework was accomplished remotely. His homework consists of written essays, practical activities (such as, completing spreadsheets), and other exercises. He has an app on his telephone that coordinates all of this. When he completes an assignment, he scans it with his telephone and submits it to his teacher or assistant for grading. Apparently, from what I read, similar systems are used in other remote-learning countries.

The university has announced that classes will resume in-person later this summer. That means a trip will soon be in order to find living accomodations and taking care of the details every parent in the world needs to contend with when sending a child off to college.

Until then, the house with no name will continue to be an adjunct campus of the University of Guadalajara.