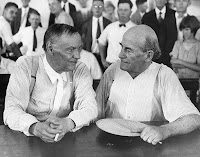 This evening I started reading Edward J. Larson's Summer for the Gods: The Scopes Trial and America's Continuing Debate Over Science and Religion. Based on the first 50 pages, I think it will be very informative.

Professor Larson spends the first portion of the book discussing the background of the trial. I would have thought the background was unnecessary. After all, we all know the background. Good grief! We all saw Spencer Tracy in Inherit the Wind. We know the hero and the villain without a lot of academic chat.

Well, I was wrong. The introduction dispels a lot of the myths surrounding an issue that has taken on cartoon predictability. The issue is far more complex than popular culture would claim. I will give a more thorough review when I have finished my read. (I suspect that will be after I return from my Brazil trip -- more on that later in the week.)

But the book and two comments today from Kim G of Boston started me thinking about my planned move to Mexico. Several posts ago, Michael Dickson raised the issue of whether I had a very realistic idea of how my move to Mexico would impact my life. As part of that question, he raised the title of the blog: same life -- new location. His point was that if I thought I was going to have the same life in Mexico as I have in downtown Salem, I was deluding myself. I see his point, but I think he is wrong in certain respects, and correct in others. And where he may be wrong is a direct result of me not being very precise in how I use the term life.

I know that Michael is correct that until I have experienced some of the frustrations of getting simple things accomplished in a foreign country, I cannot possibly know what it means to experience life there. To a certain degree, I experienced that in Greece, and to a lesser degree in England (even though I think the language gulf was equally wide in both countries). However, those are circumstances, and circumstances are not my life.

My life is the sum parts of who I am. Going to Mexico will not make that life any better (or any worse). I have read enough blogs of people who were moving to Mexico because they believe the Mexican people have no worries, everyone is friendly, no one competes at the expense of neighbors -- and the sun shines all day and it only rains at night. But talk like that is malarkey -- and the writers are soon to suffer great disappointment when they discover the very thing they thought they had left behind lives right next to them in their Mexican Eden.

Those are challenges. And that is part of the reason for the move -- to wake up every morning and know that I do not have the skills to get through the day, but I will need to learn them to cope and thrive.

Same life, Utopian? I don't think so. Just a realistic appraisal that I am not running away from anything. I am simply trying to find a way to keep some interest going in my life.
at March 16, 2008

I think you hit the nail on the head. I read online where people want to move to Mexico because it's more family oriented. Well, if that is what is imported why aren't they converting to LDS? That church is certainly more family oriented. After all "change comes from within". Maybe a more accurate title is "same person, different country". I wish you much luck on your move.
regards,
Theresa

I wondered the same thing about your title. It will NOT be the same life, that's for sure.
I found the last line of your post extremely sad.

Wayne -- I am not certain, amigo, what you find sad in my last sentence. I am looking for some new circumstances in Mexico -- and I think I will find them. My current daily routine is not bad. I just need something different. My colleagues, of course, are aghast because they thought I would retire to London. One said the other day: "Mexico? What are you going to be next -- an indian chief?"