going to the birds 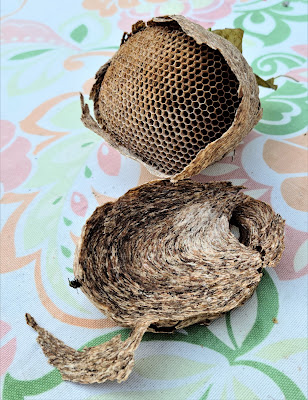 That means it is vine-cutting day when I try to establish some form of order on my unruly cup-of-gold vines by lopping off their apical meristems. That means pulling out the tall ladder to do my periodic audition for the Wallendas. And, yes, you are correct, men in their seventies climbing tall ladders is a perfect recipe for an essay ending in tears.

But not today. Today's adventure did not end in tears. Just an essay. And this is it.

I had finished one vine and was busy trimming the one that stands guard on my brother and sister-in-law's bedroom when I felt a small irritation on my left hand. That is not unusual. The vines house all sorts of creatures. But I could not see anything.

Then I felt another. And another. Then another, but this time on my left arm.

I missed the culprits because they were almost too small to see. But they were quickly joined by a small swarm of larger creatures I see quite often around here. Usually, drinking at the swimming pool. They were the small black and white wasps that are common here. Paper wasps.

The source of this buzzing and stinging mayhem was not easy to see. I had to lift a few vines to discover one of those football-shaped nests common in the wasp family. This one was rather small.

It was not my first encounter with the small wasps. Several years ago, when I lived in Villa Obregon, , I discovered the wind had knocked down a basketball-sized nest of the same wasps after one of our occasional storms. They were not happy when I started investigated their fallen home.

I called my land lady who then called civil protection. Nothing happened for two days. When the gardener arrived, he picked up the nest and put it in a garbage bag. That is how I learned that, even though the small wasps sting, they were not a true danger. At least, to me. My brother, who is allergic to the stings of flying pests, may not have been as fortunate.

With that knowledge in hand, I grabbed a can of wasp spray and stopped the swarm. Extracting the nest was easy. You can see it at the top of the essay.

These brood factories are an architectural wonder. There are three layers of egg chambers stacked one on top of the other with space between them. All to provide a safe home for eggs and the subsequent larvae. Just like the Windsors.

A Mexican friend told me that when he was young, his siblings would tear the nests open to harvest the grubs. His mother would fry them with salt and chilies. When I asked him why he no longer ate them, he replied: "We have better things to eat now."

I have one more tale about my vine-cutting day. My patio is not simply a breeding ground for insects. We breed birds, as well.

Currently, there are two nests in operation. The bullying Eurasian Collared Doves are once again sitting on eggs in one of the Queen Anne palms. I have done my best to shoo them away because their bathroom habits put them in the irritating bird category. I may as well be housing park pigeons.

The other nester is far more welcome. A few weeks ago, while practicing my Spanish in the alberca (just to show that I do learn something in my language exercises), I noticed a small Ruddy Ground Dove coming and going. She appeared to duck inside the vines in front of Omar and Yoana's bedroom.

I was not surprised to find a tiny cupped nest. But it was too high for me to see if it had eggs or hatchlings.

Daily she would swoop in, usually for an hour or so before she darted out again for a quite trip to the Oxxo or wherever Ruddy Ground Doves goes to refresh themselves. Most small doves are near the bottom of the food chain. When not being devoured by snakes, they can be found on expensive plates at Máximo Bistrot. As a result, they are extremely flighty.

But she is persistent. Every day she endures being attacked by the Eurasian Collared Doves who try to drive her away from her appointed duty. She endures.

Yesterday, the vines where her nest is hidden was my last project of the day. I climbed the ladder and cautiously looked into the nest. I will not include a photograph of what I saw. There was one chick stretched out on its side. As black as a moonless night. For some reason I do not know, it had died.

That did not keep the mother dove from returning to the nest to sit on circumstances that will not feed her instinct to reproduce. Or maybe it does.

Biologists would call it the drive to replicate genes. The rest of us, falling into the dangerous realm of anthropomorphization, see it as a mother's love in its unadulterated form.

I do not know what the bird feels -- if anything. But if I had to choose between science and a symbol of virtues most humans have experienced, I would choose the latter.

Life is not a Disney tale. It is far better than that.

* -- At least, it was when I wrote this essay. You will be reading it on Thursday. Just pretend you have crossed an international date line in the Blogosphere.