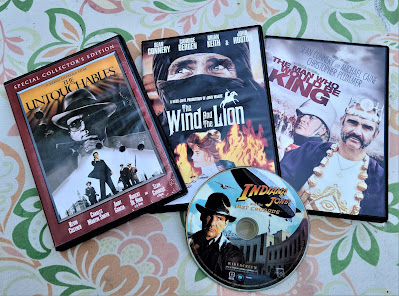 Time is a writer's worst enemy -- and best friend.

I told you today I was going to write about the closure order in Jalisco. But that will have to wait for tomorrow. Or, at least, until later.

The newspaper headline this morning has sent me in another direction. "Sean Connery, actor and the original James Bond, dies at 90."

Like most people, I have generally imprisoned myself in my house because of the virus. One of my devices to stave off boredom was to pull out some of my favorite movies. We had a Woody Allen Festival. A Star Trek festival. An Alfred Hitchcock Festival. But my favorite was the Sean Connery Festival.

Most of the obituaries this morning have led with a reference to James Bond -- the movie persona I suspect most people would associate with him. And it is not a bad association.

After all, he was the original movie Bond, and the first three movies in the series would be the benchmark for the rest of the series. A comparison that the other films simply could not match.

Even though I enjoyed the early Bond films (Connery was every teenage boy's ideal of what a man should be), they are not my favorite Connery films. I preferred his work in four other films I watched recently.

The Man Who Would Be King is an adaptation of the Rudyard Kipling story. Set in the era of the Raj, two British soldiers set off for adventure in the wilds of south Asia in a very clever re-telling of the hubris of Alexander the Great. Connery is the lead and proves that his acting range goes well beyond guns and women -- even though both play a central part in this film. There is the additional benefit that the best friend of Connery's character in the film is Michael Caine -- his real-life best chum. Even though I saw it in England whilst in the Air Force, it appealed to the 12-year old boy who still controls my taste.

The Wind and the Lion was another of those films I first saw while in the military in England. It is another boy adventure. Literally. Sean Connery plays a rebellious Berber leader, the Raisuli, who kidnaps an American woman and her two children in an attempt to topple the Moroccan sultan, his nephew. A lot of the movie is filmed through the eyes of the kidnapped boy.

I was going to write an essay about this movie two months ago because it is one of those genres that could no longer be made without a heavy overlay of irony. It even seemed a bit out of place in the 1970s.

There are several set pieces where Teddy Roosevelt and the Raisuli expound on their philosophies of life. For a lot of reasons, it is hard to imagine any American filmmaker letting Teddy Roosevelt mouth the following sentiments, even though it sounds exactly like the first Roosevelt president, and maybe the second:

The American grizzly is a symbol of the American character: strength, intelligence, ferocity. Maybe a little blind and reckless at times, but courageous beyond all doubt. And one other trait that goes with all previous. . . . Loneliness. The American grizzly lives out his life alone. Indomitable, unconquered - but always alone. He has no real allies, only enemies, but none of them as great as he. . . . The world will never love us. They respect us - they might even grow to fear us. But they will never love us, for we have too much audacity! And, we're a bit blind and reckless at times too. . . . The American grizzly embodies the spirit of America. He should be our symbol! Not that ridiculous eagle - he's nothing more than a dandified vulture.

I just may write that essay yet.

But the star of the film is Connery. And he plays what could have been a cartoonish character with the subtlety he brought to most of his roles. He makes Candice Bergen look like an amateur. That was probably the director's fault -- or perhaps his intent.

Those two films provided Connery roles as a movie star. Bond on horses -- but with greater depth. In the next two films, he took supporting character roles that gave him an opportunity to show his true chops.

Any movie-goer will remember his slightly-shady, but loyal beat cop, Jimmy Malone, who was recruited by Eliot Ness to fight prohibition in The Untouchables. He played a man who knew his faults and lived with them, and we immediately identified with him. Who else could have delivered this throwaway line with conviction and wisdom: "You just fulfilled the first law of law enforcement. Make sure when your shift is over you go home alive." Followed by the film's hook: "Here endeth the lesson."

I suspect my favorite Connery role is Henry Jones, Sr. in Indiana Jones and the Last Crusade. It would be my first choice for a Father's Day movie (Field of Dreams running a distant second).

Harrison Ford and Connery pulled the movie out of its cardboard serial style into something that approximated real life. Certainly, the father-son relationship had all of the hallmarks of love, regret, and detestation that marks any authentic relationship.

I am sure you have your own favorite Connery roles. But these are mine.*

When most of us die, we leave memories behind. But even those are doomed to fade. It is the artists amongst us that leave part of who they were with us for a longer time. When my friend Ed Gilliam died, he left behind a trove of paintings that are tangible parts of who he was.

So it is with actors. Sean Connery may have died this morning. But his work will live on in that silver heaven flickering on the screen.

Or, as my Scottish grandfather would say: "Failin means yer playin."

* -- One of my favorite Connery roles is his William of Baskerville in the film adaptation of Umberto Eco's masterpiece of a 14th century murder in an abbey: The Name of the Rose. I may watch it tonight in a tip of my tam to an actor who will be missed.