the quick and the dead 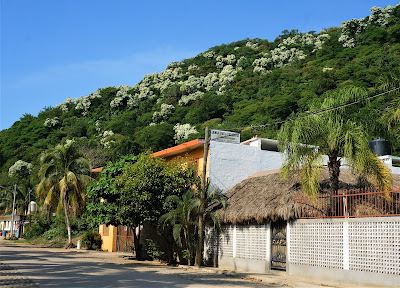 Tradition does not run deep in my DNA.

My family is just as likely to celebrate Christmas in June and Independence Day in November. After all, one day is as good as another for celebrating life. (Social warning. Husbands trying to excise a missed anniversary with those two sentences will discover they are not universally true.)

That is why I am a little surprised that I have fallen into a tradition of my own. One of the most notable sights in Melaque each October is the appearance of the white blossoms of the Mexican Rosewood.

Whenever the surrounding hills look as if piles of snow have accumulated in our tropical greenery, it is an omen of three events: the return of the buzzards to my communication tower, the migration south of northern visitors, and the arrival of day/night of the dead.

Of course, it is not snow --as welcome as that occurrence would be. They are the white flowers of the Mexican rosewood. Or barcino as it is known locally. (Interestingly, "barcino" is the Latin name for Barcelona, which has nothing at all to do with the tree. There, I have now given you three answers for your next pub trivia outing. Mexpatriate is here to serve.)

The barcinos start blooming in October, just as the Canadian feet start hitting the Manzanillo tarmac. Those sandal-clad feet constitute the first ranks of the long-term northern visitors. People who will stay for seven or six months, and who are happy to trade the snow of the barcinos for the white stuff clogging their northern homes.

They will be followed by waves of visitors with shorter stays in mind, until the flow peaks in critical mass in January and February. It will then start ebbing.

Even with only the early arrivals, it is possible to discern a shift in the social cycles. Grocery shelves are being re-stocked. Seasonal restaurants are opening. Hotel staff are practicing their English. Masks are making their appearance for theatrical purposes. And tip jars are shiny after a good scrubbing.

During half of the year, this area is a tourist destination for Mexican families. The town has a different aura in the summer. In the winter, the place is simply -- different. Only Christmas and Semana Santa bring back the Mexican aura in spades.

The third event announced by the flowers is day/night of the dead. To a certain extent, the Mexican Department of Education's declaration in the 1960s to turn a regional rite into a national cultural event did not fully take root in our area -- or other areas of Mexico.

Some areas of the country had a long tradition of celebrating an annual conversation with dead relatives before it was tamed and homogenized by the Catholic Church. (Up north, we call that Thanksgiving dinner.) If you go to Oaxaca or Pátzcuaro, you will see the traditional sanitized version endorsed by the Church.

The tradition existed here, but it was certainly not as strong as it is in the highlands. There is some activity in local cemeteries, but most altars are built in the privacy of homes. And, of course, there are the public displays in the San Patricio jardin and on the Barra de Navidad malecon to add a Six Flags over Texas aura to the proceedings.

A couple of years ago, Hank told us that when marigolds, the traditional flower in the Mexican highlands for decorating graves, were difficult to buy here because of transportation issues, people would pick the barcino blossoms for graves. The substitution made sense.

Transporting fresh flowers was very difficult before these villages were connected by road to the rest of Mexico. And the substitution was very practical.

Because the barcinos bloom in October, they were readily available for decorating altars and graves at a reasonable price. Free. It may have also been better-suited to the purpose of the flowers -- to allow the departed soul to find its way through a familiar scent. What could have been more familiar than a local bloom? Otherwise, grandpa may have ended up sniffing marigolds in Tzintzuntzan.

But, if I am reading some other omens correctly, the barcinos may not herald the arrival of the usual mass of northern tourists. There is a very vocal contingent on Facebook who repeatedly spread the news that they are not coming south, accompanied by a subtext that those who are coming must have lost their common sense.

I do not know how many people will eventually not show up. But, while I was out shooting the hills for you, I stopped by one of Melaque's RV/trailer parks. 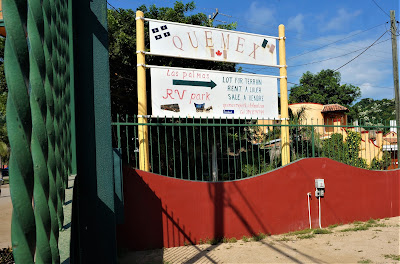 By this time in most years, the turtle people who travel with their homes have started arriving. Not today. At least, not in that park. It looked like a field waiting to be plowed. 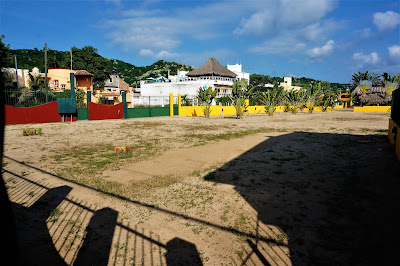 Now, the question is whether the barcinos or the RV Park will be our more accurate haruspex-practicing Spurinna.

I do know that those tourists who plan on spending all or some of their winter here will have an enjoyable time -- as long as they keep reminding themselves that Mexico is not a colony that needs the help of outsiders in managing its affairs.

They may even want to pick a sprig of barcino to celebrate their arrival.
at October 21, 2020