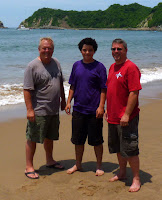 I apologize for slacking off these past two days.  But I decided it was much better to live friendships than to write about them.


This past week reminded me that the value of friendship is in the doing.


If you asked me what the three of us discussed during our trips this past week, I could give you a vague idea of the topics.  But if you were not there as a participant, knowing the topics would do you little good.


I fully anticipated good conversation with Brian.  He is a minister.  A teacher.  A scholar.  And he has lived in several countries around the world.  He is one of those people who remind you with his talent just how the art of conversation has slipped away in general society.


But his son, Holden, turned out to be a great joy.  I was a bit intimidated about what I would do to occupy the interests of a 16-year old boy.  I have always known he was very intelligent.  But 16 is a challenging age.


It turned out not to be a problem.  His conversation topics and his ability to argue (in the rhetorical sense of that word) bore the DNA of the idealistic dreams of any teenage boy.  But he is also very logical and can hold his own in any discussion.


I should not have been surprised.  After all, he has almost completed all of his requirements to obtain his civilian flight license.


But he is still a teenager.  And discussions only go so far.


He told me before he arrived that he would be interested in riding a jet ski.  I knew I had seen them on the west end of the beach earlier in the year.  But each time we were on that side of the beach, nada.


On Saturday, we decided to have one last lunch on the beach before I drove them to the airport for their afternoon flight.  Just as we sat down, we all saw it.  One jet ski in the water.  Just waiting to be ridden.


Holden did a quick calculation of time, and decided if we were economical with our lunch time, he could get in a full half hour of jet ski before we had to leave.


So, we did.  And he had a great time.  That is him out there almost as the only vessel on Navidad Bay.  Whipping back and forth.  Writing his initials in the Pacific.

My only regret is that there was not another one available.  It would have been fun to race him -- reliving some of those old motorcycle days.  When rules were just a fading ember in the back of the mind.


But, it eventually ended.  As did their week in Melaque.

I dropped them off at the airport, and took delivery of my GPS mount and power adapter – brought from Seattle by the very capable hands of my friend, Anne.


The mount is now installed on the windshield of the Welfare Escape, and the GPS is pointed toward San Miguel for my return drive to the highlands.  That is what I will be doing all day on Sunday. 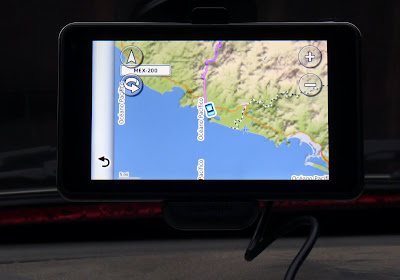 nüvi 3760LMT Garmin here -yours looks to be the same?  In Las Vegas proves to be a fine guide. Looking forward to trying it in Mexico.

Have a safe trip north (NE) to SMA.

I have been a slacker this week too. It's interesting to interact face to face, isn't it?

And it is a good reminder I should be doing the same thing each day with my neighbors.

Mine is a 3790T.  It is great.  But the features in Mexico are a bit more limited.  Main roads are great.  Side roads?  Often missing.

I arrived in San Miguel less than an hour ago.  It was a good drive.

As you know, I am ensconced -- with the balcony door open.  These temperatures are refreshing.  Even after cool days at the beach this week.

I am so glad you such a wonderful visit with Brain and Holden.  I know they are special friends of yours.

Even though I told you by email, I should let other readers know about what looks as if I gained 200 pounds in a few months.  The wind has billowed my shirt.  But I can certainly stand to lose some weight.

great pix!  love the one of holden out on the jetski and the one of the rain squall in the previous post. nice shot of the 3 of you too.

returned from our trip to l.a. on thurs.  really enjoyed the time with our son matt and l.a. is not at all what i expected-it was much nicer.

as i may have told you, steve's work visa took a little longer than we'd expected so we were not able to leave fri. as originally planned. we will be leaving this coming sat. instead.  glad to have the moving out of our house over with. we are staying at a holiday inn until we leave. i'm very eager to get to nagoya, but this extra week gives me a little more time to spend with friends.

enjoy the rest of your time in sma and say hi to babs for me.

I am willing to bet that Los Angeles seemed nicer because you were visiting with Matt.  Relationships change all circumstances.

I hope you enjoy your last week in The States.  Keep in touch.