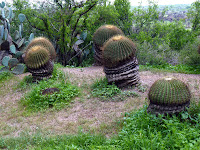 I took a look back at my San Miguel posts for this past month.  They sound as if I have been vacationing in Manhattan.


A wide choice of cuisine.  Beautiful buildings.  A cornucopia of night-on-the town entertainment.  The only thing missing is the mobile cocktail party.  And I am certain it is out there somewhere.


But San Miguel is not merely Tamara and Tadeusz reinventing Paris in the Mexican highlands.  For all of its sophistication, San Miguel is just a small town in the desert.  And it is the desert that gives it much of its charm. 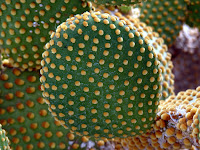 I saw that side of San Miguel today.  On the first day I arrived, Babs informed me that the spectacular ravine behind her house is part of a nature reserve.  A desert botanical garden.  You may recall her post about the fire that burned a good portion of that reserve.


I knew there was a guided tour on Tuesdays and Thursdays, but I managed to miss each of them.  Until today.


El Charco del Ingenio Jardin botánico -- to use its full name -- is a short drive from the house.  The reserve is basically a watershed protection area.  Most of the fresh surface water that flows through San Miguel passes through the canyon that makes up the heart of the reserve.


But, as the name implies, the reserve is designed to protect plants.  Not only native to the ravine, but from other areas of Mexico.


The garden is not run by the government.  In the 1990s a group of private citizens saw the importance of the area.  Unless the land was preserved, it would be developed.  Endangering the watershed -- and the wildlife that depended on it. 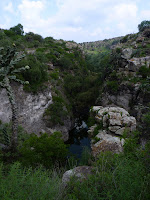 The private organization that took title to 67 hectares of the land was not merely a preservation group.  The land had been overgrazed by cattle and used as an informal garbage dump.  With a good deal of work, the area was returned to a relatively wild state.  Native species recovered and the number of bird species attracted to the area increased.


The reserve centers around two reservoirs originally constructed to develop local manufacturing.  But there are also the remains of an earlier water wheel from the 1500s.  Perhaps the first Spanish water wheel in North America.


The reserve was never designed to be wilderness.  For a fee, visitors can spend as much time as they like walking the trails that crisscross the reserve.


I am not much of a plant person -- other than recognizing the value of natural plants in any ecosystem.  Not surprisingly, most of the plants in the reserve are cacti.  Some native.  Some rescued from other areas of Mexico. 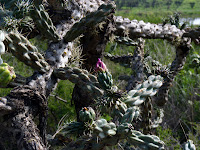 When I was there, most of the cacti were past their bloom period.  But there was plenty of fruit setting on most of them.  My guide invited me to taste a couple.  There is no better way to appreciate plants than to recognize their importance to my mouth.


But the stunning portion of the reserve is the ravine that runs through one end of the reserve.  Over the years, the stream has dramatically cut through two different strata of volcanic rock.


My guide offered me the opportunity to climb down a metal ladder to the floor of the ravine.  I was game, but my right ankle was not.  Perhaps that joint was telling me it was time to act my age.

The reserve has also reserved the relationship between the land and the local indigenous people.  Not surprisingly, the natural springs in the ravine were regarded as holy places.  To honor that heritage, the reserve has incorporated several pre-Columbian icons as part of the reserve’s presentation.


The two and a half hours I spent on the tour was well worth the admission price of 80 pesos.  The time slipped by far too fast.  Because there is just too much to see in one visit.


One thing I did not have an opportunity to do was to sit and watch the birds,  The variety I saw on our walk was amazing.  Especially for a desert.


I will not get back to the reserve before I leave.  But when I return to San Miguel, it will be top on my list to simply spend a day enjoying the type of day that requires no opera glasses or forks.
at July 28, 2011

I think the semi-desert world in which San Miguel sits is one of its better attributes.

Great photos.  Thanks for sharing

Looks like Arizona - quite different from the tropical and seaside locations we frequent. I like the desert - nice photos.

I am an absolute cacti junkie. One of the things I miss most living in the NW.. Thank you for the pics..

And it is doubly attractive in the rainy season.  The subtle shades of green are astounding.

I should be thanking you for putting it on my visit list.  I bought two books on the reserve while I was there.  One in Spanish -- that should help me improve my language skills.  I would love to spend more time out there.

I have never seen that variety of cacti in one place before.  If you get to San Miguel, you need to stop at the reserve.

When my brother and I drove down over two years ago, we crossed at Lukeville. One of the things I remember moist on that trip was driving through  Organ Pipe Cactus National Monument.

We have several variety of cacti in Melaque.  But not in this type of setting.  If I lived in San Miguel, I could spend a lot of time in the reserve.

I liked exploring the canyon, ravine, and reservoirs in the 1980's.  There was usually a herd of goats (no cattle); no garbage.  Mesquite trees were being cut for firewood....  The nature reserve designation has allowed us the continued enjoyment of this area.

I think you are correct about the grazers. Even though my guide and the literature refers to cattle, all of the residents talk only about sheep and goats. And, of course, they can cause the most damage to pasture land -- if you believe the cattle men.

My guide showed me some pictures of the garbage and discarded junk that was pulled out of the ravine.