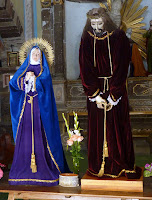 Some days have a great feel to them -- like a well-written play with a credible third act.


This was one of those days.


A thunder, lightening, and rain storm on Tuesday night must have cleared heaven’s sewers because this morning opened with a cobalt sky as a backdrop, and a very aggressive wren sounded a war call against all rivals.


It could have been the opening of a Tarentino film.  Can beauty truly be beautiful unless it is played through a lens of danger?


I tramped down the hill to meet Billie and Ned for lunch.  I was a bit early, so I ducked into Santa Ana -- one of those churches that could easily be mistaken for a warehouse by its blank exterior.


Like any establishment that welcomes all comers (or so I am told), Santa Ana has its own host and hostess.  That is them at the top of this post.


I suspect I will never grow accustomed to these holy mannequins -- complete with clothes and wigs.  Every time I see them, my startle reflex kicks in.  Maybe that is the church’s point.


But the moment I entered the church, I noticed something unique.  There was music.  A guitar.  And two voices singing a contemporary Christian chorus. 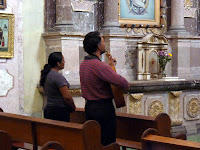 They were standing facing the altar.  Singing the passion of their hearts.  A song of praise for their God.


I sat down and quietly joined them in English.  When they finished their praise, they began praying.  Aloud.  But softly.  They had obviously come with a request.  For a dying relative.  For the birth of children.  For peace throughout Mexico.


There was no way for me to know.  Nor should I.  They were not praying to entertain me.  But I joined them in their prayer.


Buildings do not matter.  Hearts in praise and prayer are what make faith a reality.


Many of you know Billie from her blog -- billieblog.  I started reading it long before I moved to Mexico.  As a result of one post, we started emailing one another occasionally.


Since moving down here, I have met several bloggers.  With only one or two exceptions, they were exactly as I thought they would be.  When you run people’s lives through your brain, you start to know who they are.


Billie was no exception.  Talented writer.  Photographer.  Cook.  But those are roles.  She is kind.  Gentle.  Loving.


Watching her with Ned is to see true love in action.  The type of love the young couple in church were expressing to God.  Billie and Ned perfectly portray the bittersweet experience life can be.


I was sorry to say good-bye to the two of them.


The evening then topped off the day.  I had purchased tickets to see Luis Gasca and his Cuban orchestra.  I thought I was going to get an evening of Cuban music.  I got far more.


The stage turned out to be a lazy susan of musicians.  Instead of starting with Cuban music, Luis Gasca (a trumpeter), his saxophonist friend Richie Cole, a drummer, a bass player, and a pianist got the evening rolling with several jazz pieces.  And great jazz it was.  San Francisco could not have offered up better competition. 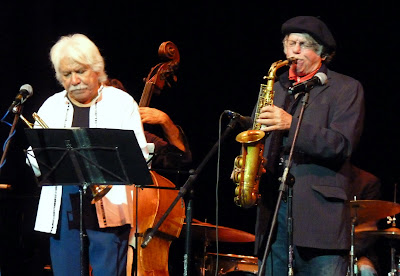 One of the highlights was Richie’s jazz interpretation of “Pure Imagination” from Willie Wonka and the Chocolate Factory.  Poignant enough to live up to its title.  And his rendition of Venus was -- well, hopping.


The band was joined by a Mexican singer with a great voice -- turning “What Now My Love?” from a syrupy ballad into a sardonic tale of doomed romance.  He could have been his own concert.


Just as the concert seemed to be wrapping up, a singer-guitarist, Rosa Guadalupe, moved the audience to another music world.  Of strings and soaring ballad runs.  The woman sitting next to me was in tears.


But it was then time for the Cubans -- nine musicians.  To my great disappointment, they chose to start their program with the ultimate Cuban cliché – “Guantanamera.”   I was ready to leave.

But I am glad I didn’t.  For another hour, we were treated to some great Latin music.  The big number was “I’m So Hard” with both a Cuban and jazz treatment.  Good stuff.


When they played their encore, I felt as if I had just spent a day at a music festival –- with the variety of offerings.  And, amazingly each part came together as a great evening of music.  From “Pure Imagination” to “I’m So Hard” is a wide musical reach.


On my way back up the hill. I realized the concert was a metaphor for my day.  A little faith.  A lot of friendship.  With a background of challenging music.


And this is where I should stop in relating my day.  But, if I did, I would give up an opportunity of hearing from the I-Told-You-So crowd.


I spent a couple of hours today getting a new battery for my truck.  The one I bought six months ago turned up missing.  And, yes, my truck was still parked on the street.  Oh, and I should add, my antenna was also removed.  The Welfare Escape just keeps on giving.


But trying to find a battery in as place I did not know was an adventurous interlude in my day.  And it all turned out fine.  I have my new battery -- costing about 50% more than it did in Melaque.  But no antenna.  And I have no need for one.


Another lesson for the day.  What I can do without, I will do without.


”If there's anything you need let us know and we will teach you how to live without it."

I'm so glad you got to the concert last night.  The star has played with many of the best in the music world............
And, aren't you lucky that someone knew where you should go to get that battery! And that the taxi guy knew where it was.  Otherwise it would have been a trip, possibly to Celaya - 40 minutes away.  Keep that car LOCKED........or put it in the garden.  At this rate you might not have money to get home!

Yes, I should point out without the help of Babs, I would probably still be wandering the streets of San Miguel with my hand out begging for someone to point me to the nearest auto parts shop.


Steve, you may be able to do without what you can do
without, but please show some concern for the next guy. He or she may not be as
easily able to snare a new battery or whatever is taken by your merry band of
burglars. The cost of replacement may actually mean something to the next
victim. Why not just tape a $1,000 MXN bill to the windshield to make it easier
for thieves and to spare yourself some trouble? What you are doing by leaving
your car unlocked is creating a magnet along that strip of the neighborhood,
sending out a signal to thieves that easy pickings are to be found there. You’re
leaving bait, but you’re not leaving a trap. You’re only attracting a nuisance.
And how will that impact others who park
on the street, whether they live there or are visiting Babs? Don’t be so
callous and arrogant to proclaim that you’re above it all. You’re really
pissing me off when you do that, you’re pissing on the neighborhood – and you’re
going to make God pissed off, too.

This time I swear that I locked the truck.  But circumstantial evidence impeaches my memory.  And I now feel thoroughly cursed.

And not everything is as it should be.  The bracket holding the battery in is not the proper one, but it is all the parts store had, and the Ford dealer had none in stock.  My next post may be about losing electrical power while driving through the mountains.  (I actually had that hap[pen once while driving down from Lake Tahoe.)

Sorry to hear about your acumulador,.  You know, one of my goals when I move to Mexico is to make do without my own car. Sure, I'll rent from time to time, but it seems like ownership is such a hassle. Your experiences are only underscoring this.

And as for travel, you can easily get around Mexico fairly cheaply via bus. And unlike the USA, if somewhere isn't served by public buses, it's probably not that interesting. Your battery would have probably paid for your two round-trips, and you'd have saved the hassle of driving to boot.

I shan't be as harsh as Jennifer Rose, but maybe you should escape the Escape.

Kim G
Boston, MA
Where we're thankful we no longer live in an area where every last thing that isn't nailed down is stolen.

I suggest you either drive to celaya to Costco to see if they have the correct size post or go to the larger Ford dealership there before you take off on your trip to Patzcauro.
And next time you buy a car, don't buy another RED car - it definitely doesn't "blend in" here.
BTW. don't forget to get the address to order a remote for your car from me. They're less then 20US from a company in Austin-can be ordered online. That will help you to get ALL the doors locked........

This was a beautifully spent day. I shared every moment of it. The only thing missing---what was on the lunch menu?
Nita

Last October Norma and I spent a too short vacation in Cuba and found a wonderful basement jazz club in Vejo Habana. It was a spellbinding evening that lasted from 9:00 pm until 2:00 am! The jazz was fantastic and included a female singer that wandered in from another club and joined the group for a set, singing in both languages. It was an old club with walls covered by photos of all the greats from the pre-revolution period. It was a great time, one which we will repeat soon.

I hope to return to Cuba one of these days.  The Salvation Army has remained there through the revolution.  When I visited in 2001, I really wanted to return.  As the politics change, that may become true.

You know, I have no memory of what I ate.  The conversation was that good.

It appears the Escape is escaping me bit by bit.  As long as I keep up my temporary housing plan, I need to have a vehicle to move me along my path.  I would have found it rather difficult to bring what I did to San Miguel de Allende on the bus.

I think I can improvise to good effect by stopping by a hardware store.  All I need is a nut.

Steve , the music scene in SMA is absolutely wonderful! Mary & I have had fantastic evenings at Tio Lucas listening to a Chicago jazz Diva, or swinging along with Doc Severinson when he was playing with Gil & Cartas! Even John Davidson put on mini-concerts when he was tuning up to go out on the road.. Music, either profanely blasting from a boom box in the trunk of a workers car, even  soaring on angels wings through the nave of a church or wafting past the cheap seats in the theater, is NEVER hard to find in SMA.. I am constantly flummoxed by the variety and capabilities of the artists that either make their home there, or ensure they stop for a while when they are on the road. Sure NYC, London, and SF are vibrant musically, but I've never seen another SMALL town with such a consistently active and varied venues for the "everyman" to enjoy the artistry of its musicians.
Cheers!
( and remember to lock, lock lock! for as a good book says - "Lead us not into temptation.....)
Dan in NC

And that is the difference.  San Miguel de Allende is a small town with big town variety.