a day of refreshment


It is about time I slip on my Short-term Resident personality.  After all, that is one reason I came here.  To see what it would be like to serve time in San Miguel.


I know I am staying here for less than a month, but I want to spend some time learning how this town works.  So, that is what I did on Wednesday.


I set out from the casita with only one task in mind -- to buy the tickets for the chamber quartet concert for the end of the month.  The tickets I could not buy Tuesday.  But having only one task is as it should be.  It made me feel as if I lived here.


Buying the tickets turned out to be a social event.  The young man selling the tickets remembered me from Tuesday.  He asked how my day was going.  If I was enjoying San Miguel.  If the weather was better for me.  Only then did he tell me the computer was now working.


Then we got down to business.  I picked out my seats.  He borrowed my pen to write the seat number on the tickets, handed me the tickets, and I handed over my 900 pesos.  It was a pleasant exchange of perhaps fifteen minutes.


But I quickly discovered not all ticket sales are as social.  I noticed posters around town announcing the Third Stream Ensemble was presenting a Gershwin, Bernstein, and Bolling concert Wednesday night.  Because I came here for a dose of culture, I decided to start right then.


Off to the theater box office I went.  Using my Spanish of a three year old, I told the cashier I wanted a ticket for that night’s performance.  “Preferred or general?,” she responded rapidly in Spanish.  I knew that only because those were the only two seating choices.  As I handed her my 200 peso note, she slapped the ticket in my hand.  We were done.


Other than my welcome dinner on Saturday, brunch on Sunday, and the culinary disaster of Sunday’s picnic, I have eaten all of my meals at the house.  I decided to put an end to that. 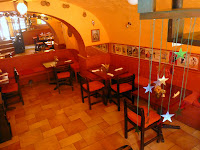 When I posted I was coming to San Miguel, Don Cuevas had a dining suggestion: La Grota for pizza.  He has never steered me wrong.  But this time I was not so certain.  The restaurant is located a block away from La parroquia -- the very symbol of tourist San Miguel.


It turned out my doubts were unfounded.  I ordered a pepperoni and onion pizza -- far more Italian than American.  It avoided that over-pasted taste that destroys any subtle tastes up north.


This pizza was extremely good.  Thin, but crisp, crust.  Pepperoni that was not Boar’s Head, but was what pepperoni should be.  And with just a hint of garlic in the sauce.


It was good enough that I returned that evening for a delicious plate of fettuccine Alessandro.


I would usually stop my blog here.  But that would leave you hanging about the concert.  And I wouldn’t do that to you.


Just as the posters announced, the entire concert was Third Stream pieces.  That delightful fusion of “classical” and jazz forms.  And who better than George Gershwin, Leonard Bernstein, and Claude Bolling to display the best of the form.


The Third Stream Ensemble is a mixture of expatriate and Mexican musicians.  With violin, flute, bass, percussion, and piano.  The type of group you might expect to find playing in a smoky Manhattan bar.


There were two vocal selections (Maria and Tonight).  The night would have not missed their omission.  I assume they were added to placate the “Know what I like; like what I know” crowd.  But the vocalist’s talent and range simply were not up to the task.


But that was the sole clinker in the evening.  The vocalist quickly redeemed himself with his expertise on the flute.


In fact, the entire ensemble, with the exception of the violinist, found the heart of the music and served it up to us with jazzy style and stylish jazz. 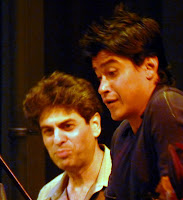 The star of the show was Mauro Ledesma, a young pianist who grabbed the audience by their brains and glands with his performance of Bernstein’s Cool.


The fact that the Gershwin and Bolling pieces were not pieces usually heard in concert won me over immediately.  I want to hear new music.  And it is even better when the new music is played as well as it was Wednesday night.


I can honestly say both my stomach and soul were well-fed.

Yeah.........glad you enjoyed the concert.  Haven't been to LaGrotta in years - there are so many good restaurants that we tend to forget this one and that one......LaGrotta does have good pizza.

I am glad your are having a good time! I can't wait until you tell us that you are going to a poetry reading in some smoke filled basement with the room filled with aging artists .....
900 pesos for a concert? Wow, your culture trip is going to be expensive in SMA.

When I come back later in the month, I am going to try some of those other eateries.  Well, I guess, starting tonight with the Longhorn.

If I ever read any iof my poetry in public, you are hereby authorized to garrote me on the spoot.

The chamber music concerts are 450 pesos each.  But you are correct, living here could put a huge dent in my budget.

900 pesos - ouch you could have spent 800 and seen Pat Boone or Merle Haggard here this past weekend. Hard to believe those olf guys are still touring - but I suppose if people are willing to buy a ticket - smaller venues than their hay day for sure ;-)

Last night's concert was only 200 pesos.  And I think I had a far better evening with the group here than I would have with either Pat or Merle.

Even more than Merle? Wow - after that comment. "Slack-jawed Yokel." I thought maybe he would be a preference ;-)

At least you didn't saddle me with Pat.

Steve, should you extend your visit by just a week, you will really have a "day of refreshment" or a couple.... Seems that SMA will be hosting an International beer festival on the 5th & 6th of August.... Now THERE is a Festival I can really support!!!! Cheers!
Dan in NC

Steve? Would I steer you wrong?

La Grotta was the first SMA restaurant we ate at many years ago. We liked it so much, we returned last autumn when we were in town for passport renewal. The second visit, years later, was as good as the first.
We had variable experiences with other restaurants (some highly recommended.) See my blog for details.

If all goes as "planned," I will be elsewhere in the highlands. But more on that later.

When I return, I hope to visit a few more of the local restaurants.