walking through my day 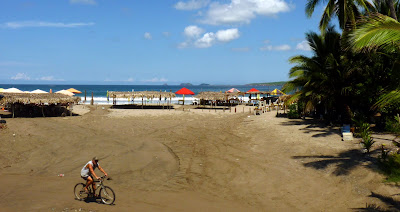 I am surprised how difficult it is to show guests everyday Melaque.  And the reason is simple; I don’t have guests every day.


But I do some things often enough around here that it makes sense to share those experiences with them.


Rather than give them the experience of standing in line to pay my Telmex bill, I let them sleep in.  Now, I wish they could have been there to see how efficiently Mexican bureaucracy can work.


I have not yet received my bill for July – even though the due date is at the end of this week.  My landlady told me all I needed was last month’s bill for reference.  I also wanted to pay a month in advance to cover the period I will be in Pátzcuaro.  That seemed to me to be the potential bureaucratic mine field.


I was wrong.  There was no long line – even though it was Monday.  The young woman behind the desk took my old bill and my 1200 pesos, and I was on my way in less than three minutes.


From time to time, I need to relearn the lesson that what we expect will be a problem, won’t; what we think will be easy, won’t.


I stopped by the rental to pick up Brian and Holden – and we were off to experience another episode of What Steve Does at the Beach.


The first stop was the Indian school (where I do some volunteer work) and the grade school (where the church donated a building).  Both in the small village of Villa Pinal (the home of blogger Sparks).  The school year is over for both schools.  But I was able to show them the facilities.


We were then off to the village that originally drew me to Mexico – La Manzanilla.  Where the beach is the major draw.  The photograph at the top of the post is typical of bucolic La Manzanilla.  It does not have much infrastructure.  But it has enough atmosphere to lay off some on Pittsburgh. 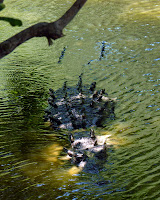 But beaches and bicycles are not the only draw.  Some interests are far more primordial.  Lots of tourists come to La Manzanilla to watch one of nature’s perfect killing machines – crocodiles.


Unfortunately, what was once a natural area where tourist legs brushed reptilian jaws is now the equivalent of a natural zoo.  Fences and walkways separate the hunters from potential prey.  Though, at least one dock, offers some rather up close and personal views of crocodiles that may not be the size of a Buick, but they could certainly give a Prius a run for the money.


While we were there, I showed them several houses that interested me when I first came to Mexico.  And I did the same in Barra de Navidad in the evening.


Melaque and Barra de Navidad have completely different feels even though they share the same bay.  Barra (at least the neighborhood where most expatriates and middle class Mexicans live) do not have Melaque’s funky beach town feel.  Barra is definitely a beach tourist town.  But its residential area is far more orderly than my neighborhood in Villa Obregon.


We had dinner at one of my favorite Mexican eateries.  These are the moments that form the rings in any friendship.  Good food.  Better conversation.  And stunning views.  Tonight we got one of our local sunsets known as Melaque Yellow.


Tomorrow, we are playing it by ear.  Whatever we do, it is going to be both relaxing and fun.

My lovely wife and I spent an anniversary some years ago at La Manzanilla. It is one great place, especially in the off season, which is when we were there, an April. We had the whole beach to ourselves for the most part. Never been back, sadly.

As for paying your phone bill in advance, that's usually a piece of cake. Can do the same with the electric bill too.

I often forget how special La Manzanilla is until I go over there.  And each time, I am tempted to stay.

We easily paid our Telmex bill from Xico in Puerto Escondido - You can pay where ever there is an office I believe. We have had some problems with CFE however. They cannot seem to read a credit balance we have in Puerto when we are in Xico. Not sure why - I suspect their database is simply not setup to handle that.

There is a wonderful palapa restaurant on the opposite end from where you took the photo - at this moment I can't think of the name, it's a Dutch woman's name.Absolutely the best food, bar none, of any brick and mortar restaurant in Barra, Melaque or La Manzanilla.  Yolanda comes to mind - not sure.  Has quite a bit of vegetarian foods, plus GREAT Thai food as she and her husband lived there at some point.  Interesting mix of people in the chairs in front, mostly Europeans hang out there.  Refreshing!
The beach is nice, but not nearly as great as we used to think Tenacatita is....still a nice beach........

We have alligators in Salem also.  They are kept in the capitol building where tourists may enter to watch them engorge themselves in their natural habitat.  There have been some deaths from freak encounters, but these are usually hushed up by officials so as not to scare off the tourist trade.

You are correct.  It is Yolanda's -- and that is where we ate.  I always like eating there.  My favorite, though, is Lora Loca.  Unfortunately, she is closed for the summer.

Funny.  I always thought they were boa constrictors.

I just prepare myself any more for what might go differently, and what I wll need to set it straight.