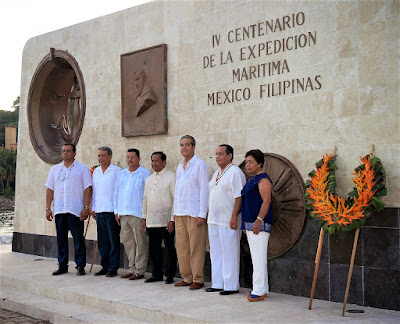 Each morning I do my impression of Earl Warren.

You remember him. Governor of California. Chief Justice of the Supreme Court of the United States. He once told an interviewer about his newspaper-reading habits: “I always turn to the sports section first. The sports page records man’s accomplishments; the front page has nothing but man’s failures.”

I have a similar morning ritual of reading The Oregonian. As an amateur historian, I skip the front page and head directly to the "This Day in History" column. There are always a few interesting acorns buried there.

This morning was no exception. This caught my eye:

On Sept. 20, 1519: Portuguese explorer Ferdinand Magellan and his crew set out from Spain on five ships to find a western passage to the Spice Islands. (Magellan was killed enroute, but one of his ships eventually circled the world.

Short historical blurbs usually get some things wrong. Though born Portuguese, Magellan had already renounced his citizenship before he set sail in an attempt to get Charles I of Spain to finance his exploration. Charles did. Magellan was no longer Portuguese.

But two facts (one mentioned and one implied) are what caught my attention. 1) The year Magellan set sail (1519) was the same year that Hernán Cortés began his conquest of Mexico. 2) The place left unnamed in the blurb where Magellan died in 1521 was in what would become known as The Philippines -- named after another Spanish king.

Both of those facts have a direct relationship with Barra de Navidad.

Despite what some people would now contend, Magellan was not just another white man out to oppress non-Europeans (though some of that did eventually happen). He was first and foremost an economic enabler.

Europe had long been trading with Asian nations. Especially, the Spice Islands (or, as they are now known, the Moluccas), an archipelago that is currently part of Indonesia. The islands provided Europe with -- you guessed it, spices. What we would now classify as a high-value, low-volume commodity.

When the land routes proved to be unstable due to disputes in and between Muslim countries, the Portuguese found an alternate sea route to The Orient when Bartolomeu Dias rounded the tip of southern Africa in 1488 -- opening the Indian Ocean to Portuguese trade.

As a result of the 1494 Treaty of Tordesillas, Portugal was awarded colonial rights in Africa and Asia, and Spain was awarded The Americas (with the exception of Brazil). And because monopolies are a powerful, but entirely inefficient, economic driver, the Portuguese built forts along the African-Asian trade routes, effectively barring Spain from the eastern route to the Spice Islands.

But Magellan had a better idea. Actually, he cribbed the idea from Columbus, who thought he was on his way to the Spice Islands in 1492 until he ran into a huge land mass not included on his charts.

Magellan knew The Americas were there. He just needed a way to get around them. He reckoned that he could sail south. That the land mass had to end somewhere.

That is where Barra de Navidad comes into the story. Magellan laid the foundation. Now, someone had to take the theory and turn it into a practical economic model. That man was Miguel López de Legazpi. Locally, we know him best as the name of a street.

Fast forward to 1564. After Magellan's crew circumnavigated the globe, the Spanish had a good idea what crossing the Pacific would entail. It could be done.

Mexico (a Spanish colony) faced the Philippine Islands, that had been claimed for Spain by Magellan. And the Philippines were a perfect trading post for setting up shop with Chinese merchants.

The problem was finding a route there -- and back. The only known trade winds blew to the east. No one knew of any that blew west. In the age of sail that was a rather important point.

So, the Viceroy of Mexico commissioned López de Legazpi, a financial bureaucrat, to lead an expedition to the Philippines to establish a trade route from the east to Mexico and on to Spain. López de Legazpi had two galleons and two tenders built in the harbor of what is now Barra de Navidad. He then pressed Indians from the mountains of Jalisco into the expedition as sailors. They set sail on 21 November 1564.

As unlikely as it seems, the expedition was successful. López de Legazpi made it to The Philippines and set up an economic colonial trade node.

Then came the hard part. Getting back to Mexico. That task fell to a friar, Andrés de Urdaneta, who was known as an expert navigator and who had accompanied López de Legazpi on the voyage west.

Urdaneta had a hunch. If the southern hemisphere had a circular current blowing east, there must be a similar current in the northern hemisphere blowing west. Of course, if his hunch was wrong, they would all die at sea. It was a high-risk business.

With only that hunch to guide him (and a lot of Catholic faith), he headed northwest (almost to the 45th parallel north) and discovered what we now call the Japanese current. But the voyage took him longer than he had anticipated. Much longer.

130 days.  12,000 miles.  Fourteen of the crew dead.  Only Urdaneta and another crew member had enough strength to drop anchor in Acapulco on 8 October 1565.

When that anchor dropped, the world was forever changed. Spain set up an annual trading regime with China -- the Manila Galleon. In exchange for Mexican and Peruvian silver, China sold Spain silk, ceramics, and other luxury goods that were shipped to Spain through Mexico.

Columbus and Magellan were vindicated. Their dream had become a reality.  Spain had its trade route to the east by going west.

And thus was born one of the greatest eras of globalization. That is, until Spain debased its currency with a glut of silver and nearly bankrupted itself in all sorts of pointless national endeavors.  Including an ill-conceived invasion of England.  Eventually, Mexican independence in 1821 was the death knell for the Manila Galleon and its attendant mercantilism.

That is why this day in 1519 when Magellan set sail to circumnavigate the globe is directly connected to the monument that regally stands on the Barra de Navidad malecon. Urdaneta and López de Legazpi are not merely street names. They are the names of people who brought honor and fame to Barra de Navidad.

Not bad for one little blurb in the morning's newspaper.