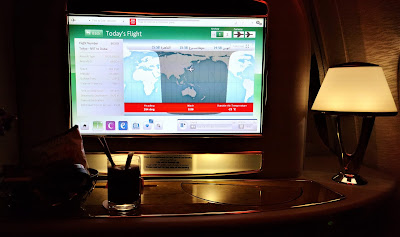 And the sound of creaking structures.

I knew those sounds far too well. Having lived in Oregon, California, and now Mexico, the sounds, along with the shaking of the building, could mean only one thing. An earthquake. And a strong earthquake. I needed to get out of the hotel. Now!

Of course, it was not an earthquake. And I was not in my hotel in Los Angeles.

Whatever it was had awakened me from a sound sleep, it was not a dream. It was real. But it turned out to be nothing more than just air.

My flight from Tokyo to Dubai had encountered air turbulence. I looked at the map scrolling across my television screen. We were now over the west coast of India, and had encountered one of those moments that keep the fun in flying.

Yesterday I told you that we spent the day chasing the afternoon sun from Los Angeles to Tokyo (welcome to eternal tomorrowland). On this flight, we are chasing the night from Tokyo to Dubai.

But let's get some context here. There are fourteen hours missing from my tale. I will bring you up-to-date.

The JAL flight landed on time at Narita airport. It has been two decades since I was last there. In 2001, it was relatively new. But it was hard to see the airport itself for all of the activity. Airplanes were on the move. Passengers crowded into the hallways with their moving sidewalks and incessant recorded warnings to take caution.

This visit was entirely different. There were fewer airplanes at the gates than at most regional airports.

When we landed something odd happened. All of the passengers (about a quarter of the 54 on board), who had connecting flights, were asked to debark as a group and wait together at the head of the jetway. We were met thereby a very polite and efficient customer service representative. Her job was to help us navigate the airport to our respective gates.

The gesture was appreciated. But unnecessary. There was not much to navigate. The airport looked like the set of a Twilight Zone episode. There was not a soul in sight for the first fifteen minutes of our journey. I almost expected to round a corner and find a group of zombies ready to enslave our tasty group. 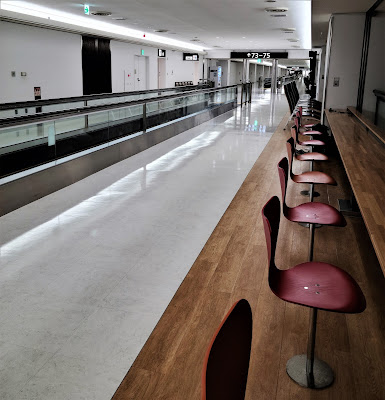 Almost all of the shops that once were filled with customers buying luxury goods were closed. The few that were open had no customers. In some, it looked as if even the shop staff had gone missing. It was probably the zombies. 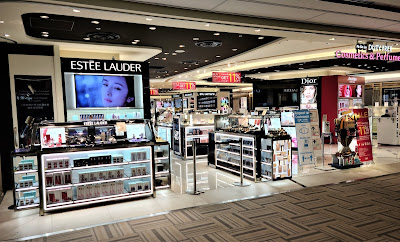 When I was dropped off at Gate 72, no one was there. Absolutely, no one. I had one of those sinking feelings that I had received the wrong party invitation. 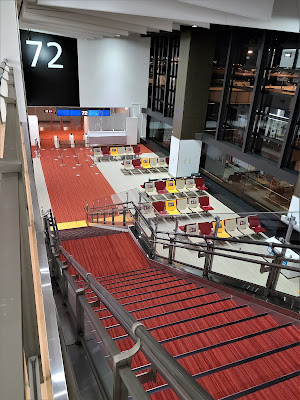 Our guide told me to wait there until the Emirates staff showed up. The time was then 5:00 PM. My flight was at 10:30 PM. When I asked her what time the staff would show up, she said they would be there around 9:30 or 10:00. That meant waiting for about 5 hours.

Normally, I would have made my way to the first class lounge. But it was closed -- along with everything else. There was not even a snack bar open. So, I walked and read -- putting this gift of time to good use.

The check-in staff arrived in a flurry of activity around 9:45. As they were powering up the computers and handing out placards to their assistants, I waited patiently at the desk. No one even looked up at me. I know that routine. I have done it myself when I have things that must be done and someone wants to interrupt me.

Eventually, I mentioned I was there to obtain a boarding pass for the flight. The harried young woman looked at me in astonishment and asked how I got to that portion of the airport without one. I told her. Her confusion melted into resignation.

For the next 30 minutes, I took her away from her other duties while she asked me questions, looked at my supporting documents, and had me sign forms before she graciously handed me my boarding passes along with a very formal bow.

I ended my last essay with four questions based on scenarios that could have driven this car into the ditch at Narita airport. Here they are with the answers corrected to 100%.

1. Will Japanese immigration allow me to enter the airport to catch my connecting flight?

You already know the answer. I never encountered a Japanese customs officer. Like most countries, if passengers are just passing through, there is no need for formal entry procedures. American immigration at Los Angeles could learn a lesson from the Japanese.

2. Will Emirates be able to provide me with a boarding pass now that their first class lounge is temporarily closed and there is no customer service desk inside the "secured" area?

You know the answer to that one, as well. The only inconvenience of waiting was that I did not know if that light at the end of the tunnel was the door to my Emirates flight or that mob of zombies we mentioned earlier.

3. If I get to Dubai, will Emirates find that the covid test that I obtained in Los Angeles to be adequate to satisfy the Americans?

I don't know. While processing my boarding passes (including the Dubai-Los Angeles leg), the woman who helped me needed to have two of her colleagues look at my covid test documents. That was too reminiscent of my team-based check-in at Los Angeles. Eventually, the test was approved. We will see how that works in Dubai.

4. Will the dreaded Jones Act once again raise its eccentric head?

I doubt it. If this were an Alfred Hitchcock production, the Jones Act would be our McGuffin -- like the microfilm in North by Northwest. Interesting, but not central to the plot. I doubt we will see its like again.

So, there we are. I have long viewed Narita as the Achilles's heel in this mission. There were a number of big things that could have gone wrong. None did. The patience that Mexico has taught us proved useful.

But the time (and word length) of this essay are both getting too long. So, I will tell you about the flight itself in my next piece.

After all, the Emirates flights of the trip are why this whole thing is happening.

See you in a couple of hours. In Dubai.