two and a half disputes about mexican independence 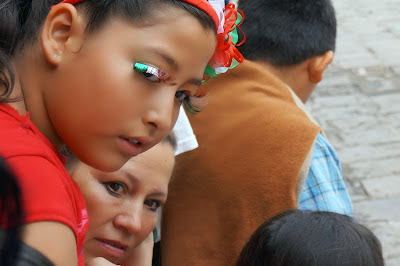 Tonight most Mexicans will gather at midnight for a reenactment of Miguel Hidalgo's el grito calling the Mexican people to arms against their Spanish colonial overlords. He would later regret stirring up the insurgency with: "Death to Gachupines [Spaniards born in Spain]." Tonight's el grito will cause the Spaniards in attendance to feel far less nervous.

There is a controversy about the midnight tradition. A minority of scholars believe Hidalgo actually roused the population of Dolores around midnight when the independence plot was discovered before its planned date. That would make 16 September 1810 the date of the speech -- and the day that is now celebrated as Mexican Independence day.

But the majority of scholars believe the tradition of starting the celebration at midnight on 15 September started with one of Mexico's most-autocratic presidents: Porfirio Díaz. He is the president that brought Mexico the Industrial Revolution, the terribly re-constructed ruins at Teotihuacan to celebrate the centennial of the Mexican Independence, and, of course, the Mexican Revolution and his ouster. His birthday was on 15 September, and he wallowed in enough hubris to make his birthday the start of Independence Day.

As interesting as that dispute is (and it is far from settled), there is another that I find a bit more interesting. You may have noticed that I said "most Mexicans" will be celebrating at midnight. Amongst them (and some that will not be attending), there is a small number* of Catholics and crypto-monarchists who light candles in hidden catacombs whose heart will not be in the day.

They look forward to 27 September when they will celebrate what they consider to be Mexico's true day of independence. And in that there lies a tale about one of a long line of Mexican statesmen who aimed for the stars and ended up shooting themselves in the foot.

Both sides agree that Miguel Hidalgo started the independence ball rolling, but there was no independence in 1810. Hidalgo's inexplicable aborted advance on Mexico City merely ended up with the heads of the independence leadership swinging in the wind on public display in Guanajuato.

And both sides agree that another renegade warrior-priest, José Maria Morelos, picked up the pieces of the war against Spain. Until he was executed in 1815.

After the Spanish got Morelos out of the way, supporters of the independence movement deserted in droves and returned to Spanish fealty. Vicente Guerrero tried to keep the movement alive as a guerrilla war.  But the odds of victory were minimal. It appeared the fight for independence would be lost.

Until history offered up one of those opportunities that the mediocre usually miss.

In 1820, liberals in Spain, having thrown off a Bonaparte usurper, created a government based on a constitutional monarchy. There were concerns that Ferdinand VII, the then-current king, would be forced to step down. He was no friend of the liberals.

In one fell swoop, the monarchist forces in Mexico -- the church, the army the establishment -- were put in an awkward position. To support Spain was to support liberalism and to oppose monarchy. For them, the church and the monarchical state were everything. Defending Spain against the Mexican independence-seekers now seemed counter-intuitive.

Into the midst of these shifting loyalties stepped the man who was to give Mexico its independence. Agustín de Iturbide was a general in Spain’s Mexican army.  Since 1810, he had ferociously fought the independence forces and was on his way to put Guerrero out of business, when his big chance arose.

Instead of fighting Guerrero, he met with him, talked Guerrero into joining Iturbide’s independence movement from a liberal Spain, and drafted what was to be known as the Three Guarantees.

The Roman Catholic faith would be established as the only faith of Mexico. All social classes would be equal. Mexico would be independent as a monarchy -- under an unnamed European royal.

There was something for everyone. Monarchists. The church. The conservatives. The criollos -- who, first and foremost, sought social advancement and position.

Well, there was something for almost everyone. There was nothing for Hidalgo’s indians. For them, everything would remain as it was. The only thing that would change is that the faces with ultimate authority would be new. There would be independence, but no social revolution. Except for the criollos who were the initial driving force of independence.

And it worked. The Spanish viceroy, the king's representative in Mexico, signed on. One day independence was a lost cause. The next day it was a reality with the stroke of a pen.

Timed for his 38th birthday (27 September 1821; despots have a certain infatuation with their birthdays), Iturbide entered Mexico City at the head of an armed force to thunderous applause as the father of his country. Thus, the alternate date for independence. To honor the man who made independence a reality.

Had the story ended there, 27 September would be a viable candidate to celebrate Mexico’s independence. That is, if Iturbide had followed the example of George Washington by retiring to his farm after resolving the war.

Instead, when no European prince manned up to claim the Mexican crown, Iturbide decided to play Napoleon, and crowned himself as emperor in the cathedral of Mexico City. All hail Agustín I. Emperor of Mexico. 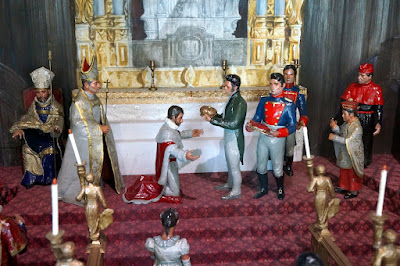 It all came tumbling down within 10 months. The Mexican elite tired of his incompetence as a monarch and booted him out of office into exile. First in Tuscany. And then in Britain.

But this was a man of action. During one of Mexico’s many leadership crises, he returned to Tamaulipas in 1824. He was cheered.  Then arrested.  Then executed.

His ashes are now on gaudy display in the Mexico City cathedral. Instead of where it could have been -- with the other heroes in the Monument of Independence. 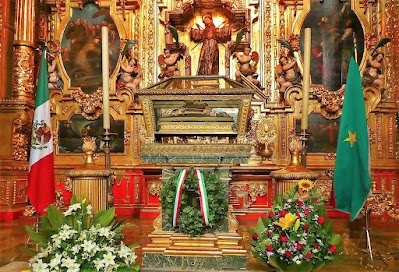 So, what are the odds for a date change? Probably about the same as me being elected pope when Francis pops his clogs.

Iburtide’s historical forces died in the Revolution. And he is a bit of embarrassment to Mexicans who like their martyrs shot by Spaniards -- instead of other Mexicans. Even PAN, the conservative party, pays homage to the Hidalgo myth. We are all revolutionaries now.

To Americans, the dispute seems a bit silly. After all, when America declared its independence, it was ours. Right then. We (with a lot of help from Dutch bankers and France) simply had to kick out the bothersome British -- who refused to leave despite our pretty language and mean girl insults in the Declaration of Independence.

We do not celebrate the date we were finally successful. I doubt many Americans even know the month the Treaty of Paris was signed. Let alone the date or year.  (It was 3 September 1783 -- another September holiday to add to the calendar).

But we can give credit where credit is due.

Happy 199th birthday, General Iturbide. And thank you for the very nice gift you gave to Mexico. Sorry the relationship did not work out for you.

* -- By "small number,"  I mean tiny. A number that could easily fit into a Mexican telephone booth -- if such a thing still exists.