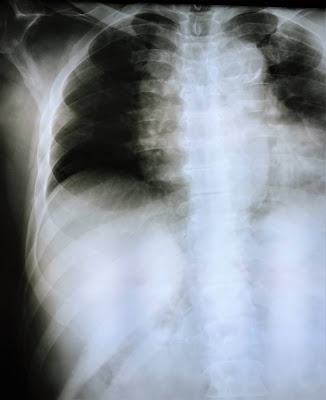 I need a minder.

At least, that is what a number of you have suggested this past month. And today I offer up proof that you just might be correct.

Last Sunday I was out on my regular evening walk. Had I kept it to the evening, this tale would never be told. But I didn't. It turned into a night walk, and therein lies our story.

I avoid walking at night -- for exactly the same reasons I do not drive here at night. Our streets and sidewalks are filled with various hazards. Potholes. Open drains. Utility guy wires. Uneven sidewalks. Low awnings. All of them just waiting to catch a pedestrian unawares.

In daylight, the chances of spotting a hazard are high. And danger can be averted. At night, I may as well be walking around with a white cane. The two previous times I have performed a face plant has been in the dark.

As soon as the sun sets, I usually take my walking act off the sidewalk and head into the street. The reason is simple. The little light there is comes from street lights. The sidewalks are simply dark -- and best avoided.

The rainy season brings new considerations. A number of our streets in Barra are flowing with raw sewage. Admittedly, it is diluted by the rainwater. But sewage it is. There is no missing the methane aroma. To avoid splashing sewage up my legs, I usually retreat to the sidewalk.

I did that late Sunday night. Because I was about 500 steps from home, I had shifted into overdrive. Glancing down at my telephone in my left hand, I could see the steps rolling up.

Then it happened. One moment I was speeding to walker stardom. The next I had made the same sound that wet laundry makes when hitting concrete. Except the wet laundry was me.

I went back to the scene of my fall on Monday. This is what caught my right toe. In the dark, I had no idea it was there. 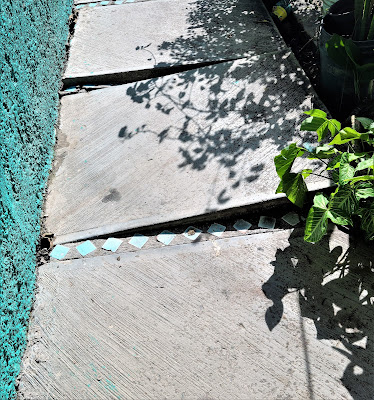 Maybe I was lucky to fall where I did, though. This is what I could have fallen in. A mere ten feet more. A home-made sewer fix. And I never would have seen it. 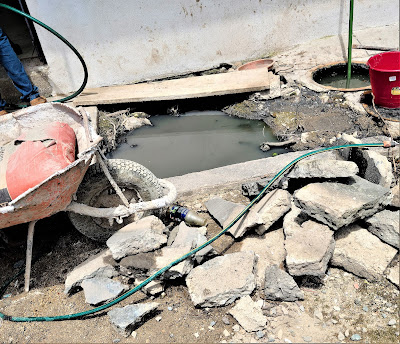 Being a man of this century, the first thing I checked was my telephone screen. It had landed screen down on the concrete. Still in my left hand. It was fine.

Then I did what any other charter member of the Hubris Club would have done. I quickly looked around to see if anyone had witnessed my fall. They had not. My pride was intact.

Only then did I start checking for physical damage. There was some. The top layer of skin on my right knee had been flayed and a stream of blood had started trickling down my leg.

I had partially caught myself with my right elbow. It was scraped, but appeared to be functioning.

But I knew something was not quite right when I tried to stand up. My first thought verged on hysteria. What if I had exploded my liver? Well, I hadn’t, and I was a bit ashamed to think I had imagined anything quite so juvenile.

The pain came from higher on the right side of my chest where I had had the biggest impact with the sidewalk. Probably my ribs said I. As the evening wore on, the pain did not wear off.

So, first thing Monday morning (after my morning walk), off I went to see Dra. Rubio for a diagnosis. I was going to drive, but the pain was bad enough that I could not use my right arm. Her office is only a 15-minute walk away.

Apparently, I had forgotten how sewery some of the streets were. I soon found myself leaping from dry spot to dry spot to maintain some forward momentum.

One of the wells that services the wealthier neighborhood in Barra regularly overflows. With our recent rains, it is producing a steady stream into the street. There is a sloped driveway that leads into the enclosure. It is now covered with what I grew up calling grandfather algae because of its resemblance to an old man’s beard.

Being an experienced hiker in Oregon, I know to be cautious while crossing river rocks covered with the stuff. But apparently, I was not cautious enough. I took one step and my foot slipped out from underneath me. I once again went down like that proverbial load of wet laundry. This time, on my back and butt in the sewage. There was nothing to do but laugh.

By the time I got to Dra. Rubio’s office, I was a sight -- and a smell. But she is a professional. She examined my ribs and told me to go get an x-ray.

That did not happen until this morning -- for reasons that will not benefit the arc of this story. And that is what you see at the top of this essay.

The news is both good and bad. The good news is that  none of the ribs seem to be broken. The bad news is that two or three are  cracked.

The x-ray technician sold me a support that looks a good deal like a bra that would be donned by a valkyrie. I will need to wear it for a month to let my ribs do what they can do on their own.

The best news is that there is absolutely no medical reason that I cannot keep my date with destiny to fly around the world in two days near the end of this month. But more on that later.

I would throw open applications for someone to demean themselves to be my minder. It would be a good gig for someone practicing on sainthood. I am demanding, ungrateful, and just plain snippy most of the time.

I fear any minder I would hire would soon need a miner of his own.