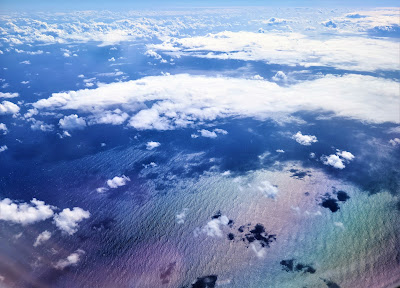 It is now tomorrow -- compared with where most of you will be reading this.

We just crossed over (through?) the International Date Line -- the imaginary line that served as a plot sop for the very fortunate Phileas Fogg. In my case, instead of gaining a day (as he did), I am losing the good portion of one. It is already approaching 2 PM on Tuesday in Tokyo. And I have just arrived at the party.

But before I tell you about my arrival at the second airport on this trip (because that has not yet happened), let me tell you a little about where I will have been living for the 11 hours it takes to fly from Los Angeles to Tokyo.

First, the technical stuff. I am in one of my favorite Boeing aircraft -- the 777-300 with a passenger capacity of 388 passengers in three classes of service: first, business, and economy. With a range of over 5800 nautical miles, it is a standard international workhorse.

Japan Airlines has a reputation of outfitting their aircraft in oriental chic. It may be an odd thing to notice, but the bathrooms with their black and chrome decor and extensive use of mirrors is just this side of understated without looking as if they had been designed for last week's lottery winner.

And you certainly will not find these choices in every airplane loo. 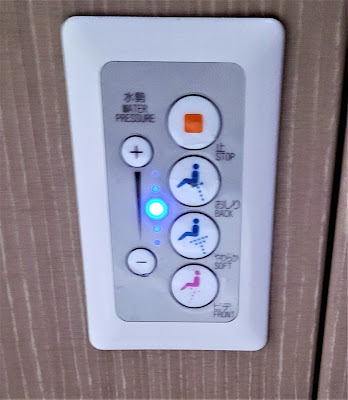 Here is an unfocused peek at the first class cabin. That is not mine. 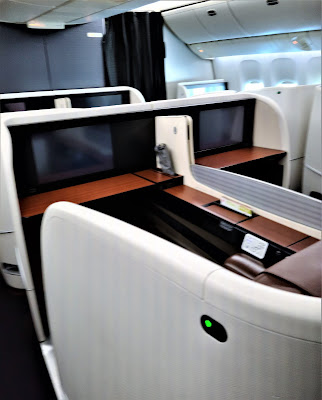 This is my seat. JAL provides so many luxuries that when they are piled in the seat, the space looks crowded. It s not. It is an incredibly comfortable sit -- even on long hauls. 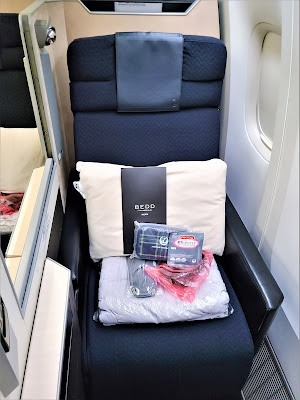 The seat folds down into a bed -- an option I did not exercise. Right now, with two more hours of flight time, it is not yet 10:00 PM in Los Angeles. For a guy who usually does not slip under the coverlet until 2:00 or 3:00 AM, there is little sense in trying to fool myself that I am going to use the bed on this trip. (It will be a different tale on Emirates later today.) 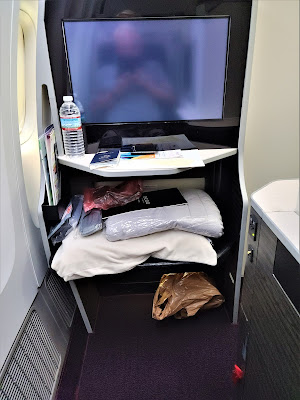 In addition to being a bed, the seat is also a recliner -- or it can be set to be a computer chair (and that is the position it has been in most of the day). I have caught up on my Spanish lessons, read The Economist and National Review, completed my daily Bible study, and written two essays.

Some people are big fans of the amenity kits that are handed out in first and business class. I usually travel with my own dopp kit with the things I need. So, a little bag filled with a single-use toothbrush, lip balm, and ear plugs and a mask I did not use are not high on my travel list. 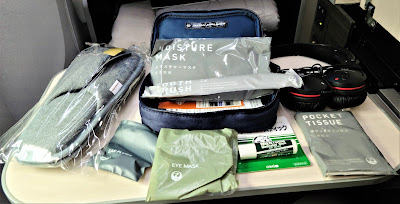 If I did not have my dopp kit, the amenity bag would be helpful. This one will undoubtedly end up in Omar's hands.

The slippers always come in handy. The packet thoughtfully includes a shoe horn because feet removed from shoes in a pressurized cabin are not so easily put back where they were.

Airline food gets a bum rap. I can remember comedians complaining it about it on the Ed Sullivan. True, some of it is atrocious. But I have found most international flights to offer some interesting fare.

Because I do not like eating dishes I have tasted before, I passed up the western menu choice of either prime beef tenderloin or sautéed sea bass. 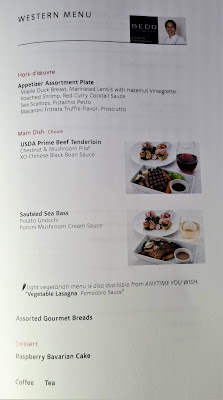 Instead, I opted for the Japanese menu of:

No one flies for the food. But the presentation and varied tastes in today's lunch was a very good effort. I may have learned a few new combinations to try at home.

Traveling from east to west (even though I am traveling from the Far West to the Far East) can be taxing on the circadian cycle. We are chasing the sun in what feels like perpetual afternoon.

The same afternoon sun in Los Angeles that we left behind at 1:30 is the same afternoon sun we will see in Tokyo at 4:40. It will simply be a day later -- without a sunset. The whole thing seems like a terrible Houdini stunt to push my expiration date forward 24 hours.

As you know, Japan Airlines is merely the warm-up act for what is coming next as I fly from Tokyo to Dubai and on to Los Angeles.

But, before any of that can happen, several quest riddles must be solved first.

For the answers to these and probably several other questions no one has yet raised, show up later today (whenever that is for wherever you live), and find out how The Perils of Steve turn out.