smoke gets in your eyes -- and your lungs

I am starting to turn into That Conspiracy Guy who always seems to sit next to you on an airplane.

You know the type. Everything that has gone wrong in his life has been caused not by his own folly, but some mysterious cabal meeting in a Bavarian castle. The Illuminati. International Bankers. Capitalists. The people who wear black belts with brown shoes.

Almost two months ago, I modified my eating and exercise regime to something that had worked for me for three years. I had lost a good deal of weight on it and my blood-sugar levels and blood pressure did their impression of a system that belong to a twenty-seven year old rather than my far more senior years.

For a month all went well. I had lost 20 pounds and my blood-sugar level and blood pressure settled into what President Harding would call normalcy. My regime was working.

Of course, because I was feeling content, The People Who Malignly Control Our Lives had to stick in their oar.

First, it was the mega-blister than kept me from walking for two weeks while I rested in bed waiting for my big toe to come back to the party. While I was resting, Those Who Cannot Be Named caused a huge spike in my blood pressure.

I am not a fan of hyperbole. If anything I usually understate problems -- especially those dealing with my health.

But this was a true spike. I have one of those apps on my telephone that sometimes-helpfully analyzes my health data. For a week now, it has been hectoring me more than a well-meaning wife with warnings that I am deep in the maelstrom of Stage 2 Hypertension. If it had a voice, it would sound just like the robot on "Lost in Space." "Danger! Danger! Will Robinson."

The spike began immediately after I was sent to bed with my blister. Now, I know that chronological proximity is not the same thing as medical causation, but my experience is that my blood pressure goes down when I exercise and it climbs when I do not. So, I was relieved when my doctor released me to return to moderate walking. And I did just that on Friday and Saturday.

It is now Sunday morning and I am in Prineville, Oregon. When I got up this morning, I was in the process of putting on my walking shoes when I looked out my brother's living room window. Usually, I would have been greeted by a view of Mount Jefferson and The Three Sisters (which sounds vaguely like a hard rock group of the 1970s). But, as you can see from the above photograph, there were no mountains. In fact, there was no there there. There was only a was.

The normally clear air and mountain views are why people choose to live in places like Prineville and not in hell-holes like Los Angeles, Chicago, or Toronto. That was brought home to me as I flew into Los Angeles yesterday afternoon. People who move here are trying to escape sights like this. 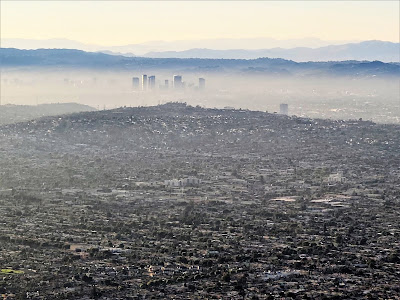 Some of you may recall the "Act of God" episode of The Crown that featured the Great London Smog of 1952. The various leading characters would throw open their curtains each day to see if the fog had lifted, while the Prime Minister muttered that it was "just weather." This morning felt a bit like that.

I was not completely surprised. Darrel had told me it was smokey due to several forest fires. And I have experienced plenty of smoke from forest fires in my 6 decades living in Oregon. But it is always a bit alarming to see it when it happens.

Because I often do suffer from a rather cavalier attitude toward this sort of thing, I continued my preparation to head off on my walk. I was also aware, from past experience, that walking here is a lot different from my walks in Barra de Navidad. My brother lives above 3000 feet above sea level. That creates more demand for oxygen.  His house is also in a neighborhood with some rather intense elevation gains. Translated into something resembling English, that means there are some steep hills to conquer. The need for oxygen is far greater here than at home.

Just as I was walking out the door, my telephone emitted one of those alarms that is best not to ignore. I am glad I didn't.

It was an Air Quality Alert. The National Weather Service and the Oregon DEQ had expanded a smoke advisory to several counties -- including Crook, where I am now.

The smoke was dense enough that the particles could cause burning eyes and  a runny nose. But I suffer those symptoms whenever I visit the high desert. I have a a juniper allergy. I enjoy the berries and detest the pollen.

Then the advisory hit home. The smoke could also aggravate heart and lung disease. I do not suffer from enough hubris to presume I have much medical knowledge. I am certainly not a doctor. But I suspect spiking blood pressure falls within the advisory.

Adults were warned to limit outdoor activities and to keep children indoors at all times -- even though any parent will tell you that children forced to stay indoors will eventually make a parent find some excuse to discover outdoor activities.

So, here I sit writing to you instead of climbing las colinas del diablo in Darrel's neighborhood.

This may be the work of the Illuminati, but, who knows, like my mother, they could be right just this one time.