is that a banana in your soup? 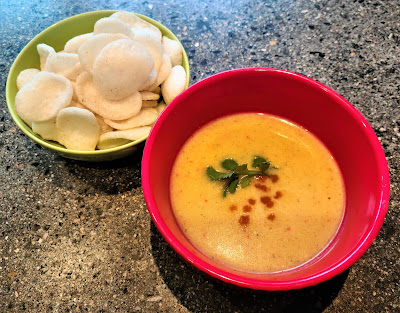 The rains have returned.

Our ten rounds with Hurricane Nora has left us a little punchdrunk. The appearance of more rain makes everyone a little bit skittish. And even though this afternoon's thunderstorm did bring a downpour, it was brief. Brief, but sufficient to fil the streets with water.

I was in the process of thinking about what to prepare for dinner when the rains started. The rain answered that question for me. Whenever it rains, I reach for my soup pot.

I knew that I wanted to make soup, but I had no idea what the soup would be. I had no meats on hand. The nice thing about soup is that each one is a completely new creation. So, create I did.

The woman across the street shared an abundance of bananas with me earlier in the week. Both dessert bananas and what are known as machos. Up north, we would call them plantains. And, as bananas do, these were on their last peel.

Where I first tasted plantain soup is now lost in my memory. Probably in a Dominican restaurant on the American East Coast. It is a staple there.

As far as I know, I never asked what went into those soups. Probably something different in each. They did not taste similar. So, I had free reign to experiment.

Pulling a Lynne Rossetto Kasper, I looked around for what I had on hand. And came up with this odd combination.

I rustically chopped the vegetables and plantains, and sautéed them in olive oil until they softened. The cilantro and chicken stock went into the soup pot with the vegetable mixture where everything simmered for about fifteen minutes. The way the layers developed in the broth was a good omen.

When I have had the soup in restaurants, it is always smooth. Every cooking experiment has one glitch. I tried using my immersion blender to smooth the soup. It was too much for the small motor. So, I pulled out the food processor and puréed it in three batches.

Traditionally, plantain soup is served with fried plantain chips. I had never experienced plantain chips until I visited a paladar in Havana (before Fidel in one of his Stalinist piques turned the owners into Kulaks and shut down their businesses). Plantain chips were served in the sitting room while we waited for our table. To me, the chips were novel. And I liked them for as long as we waited and were seated in the family kitchen. They are now on my "tried one, not again" list. To quote Gary Denness, I find them to be "mehh."

But, as he so often does, Alex came to the rescue. I was at Hawaii buying cilantro and sundry other items when I noticed a new package on his botanas display. My English Friend Hilary Bagnall can tell you I have an almost-compulsive attraction to prawn-flavored crisps.

Well, these were not English crisps, but the label promised shrimp-flavored chips. But even that word was not accurate. Like their English cousins, these chips were one of those snacks that are mostly air and look like packing material -- though they taste good. Best of all, they were from Korea. My fusion soup would have a fusion side dish.

And then came the moment of truth. I am not fond of fruit soups. They usually are far too sweet and taste too much like the fruit juice they essentially are. Especially, when served cold. So, my first spoonful of this soup was a pleasant surprise. Just a hint of sweetness balanced perfectly with piquant tang of the chilies.

When I started writing about food on Mexpatriate, a Facebook reader asked if I ever had culinary disasters and, if I had, could I write about them. I have and I did. But this soup will not go on that list. Even though I will never make it again (rule 2 from yesterday), it is one of my better soups.

So, a day of rain resulted in a pleasant dinner.

And if you had been here, I would have gladly shared some with you.