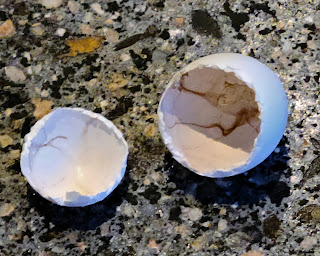 Mexpatriate is all about broadening horizons.

Today's essay is for group participation. Take a good look at the photograph and give me your best guess what might have popped out of it. Assuming anything popped out of it and that it was not a very-soft egg for some predator's breakfast.

Lace up your sensible Jane Marple shoes and wax your impressive Hercule Poirot moustaches, and have your own go at The Case of The One-Egg Omelet.

Here are the clues:

1. When whole it was just short of being one inch in length.

2. I found in on the stairs between the two Queen Anne palms in my patio.

3. Both halves were within five feet of one another.

4. The texture of the egg was similar to the type of leather you might find on a Tumi dopp kit or in a Ricardo Montalban commercial.

There are only two types of egg-laying animals that frequent my patio: birds and reptiles. And there are plenty of birds.

I have written about the Eurasian collared doves and ground doves who have turned my patio into their own nursery. But I eliminated both as the former owners of the now-empty shell for two reasons.

The first was size. The collared doves were prime suspects because they formerly used the Queen Anne palms as their nesting sites. But I pulled down their nests when I tidied up the palms earlier this summer. And they have not returned. If they had, their eggs would be slightly larger than the one I found.

Even though the eggs of the ground dove would be approximately the correct size, the shell on the stairs did not feel like an avian creation. Bird eggs are usually brittle. Like chicken eggs. This one gave under finger pressure without breaking.

There are no alligators in these parts. And though my last house was surrounded by crocodiles, I have yet to see one in my patio. But I have been visited by turtles, snakes, and lizards. Primarily various types of lizards -- from large iguanas to tiny geckos.

If I were a betting man, I would put my money on the iguana wheel -- either a green iguana or a Mexican spiny-tailed lizard (often referred to without regard to its biology as a "black iguana"). The size of the egg was right on. But its location was odd.

Both lizards nest in burrows. I have considered that the wind may have blown the shell from its original nesting place, but it would have been odd for both the top and bottom to have made that same journey.

I can hear the young lady in the back row anxiously wanting to add that birds and reptiles are not the only egg-laying animals. And she is correct. Two mammals lay eggs.

Eggs are the reproduction mechanism for both the platypus and the echidna. Unfortunately, I have not caught sight of either waddling toward my pool. In fact, I may have never seen an echidna, though, I think I saw one in the Sydney zoo.

So, there are my musings. Based on the evidence (and a lot of ridiculous speculating), my vote would be that either a tiny green iguana or Mexican spiny-tailed lizard clamored out of that egg. I regularly see the young of both species around the house. Now and then, in my bedroom if I leave my door open. 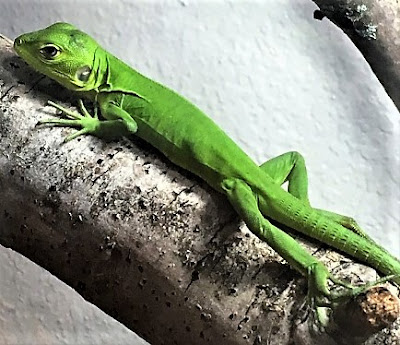 Don't let me influence you, though. What is your vote? And why?