a tree as lovely as a poem 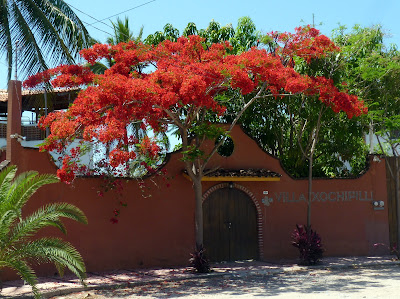 I am not an arborist.

But, trees?  I can distinguish a maple from a pine, but that just about exhausts the extent of my tree lore.

However, like Potter Stewart's comment on pornography, I know a good tree when I see one.  And the tree that seems to pop up on every expatriate's favorite tree radar is what English-speakers call the Flamboyant.

For obvious reasons.  When it is in bloom, it looks as if orange-red butterflies cover the tree.  After the blooms fall, the tree can be identified by its razor strop seed pods. 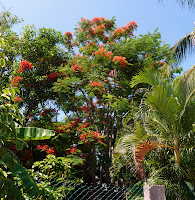 I have one in my garden.  But it is too squeezed by the mango, tamarind, and ficus to show off its true glory.

Every year, I am convinced it has died because it remains bare of leaves most of the year, and does not flower until well after its cousins in the neighborhood.

And its cousins are everywhere in the neighborhood.  You could almost believe they are indigenous.

But they aren't.  They are from Madagascar -- where the trees are almost extinct in the wild on its native island.  There is an irony for you.  A tree makes it big world-wide, and dies in its homeland.

Latin Americans like to add their own myths to trees.  In Central America, the tree is known as Malinche -- in honor of Cortez's beautiful Indian mistress, who acted as his translator and assisted the Spanish conquest of Mexico.  It would almost be as if the people of New England called the American Elm the Benedict Arnold tree. 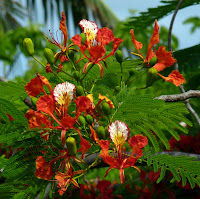 Scientific souls know the tree as delonix regia, or more popularly as the Royal Poinciana -- which sounds a bit like an American boxer from the 50s to me.

The tree was actually named for an 18th century governor of the French West Indies, M. de Poinci.  And not, as some Americans believe, after Joel Roberts Poinsett, the first American minster to Mexico.

The poinsettia is named for him.  A plant that is almost the antithesis of flamboyant.

Unfortunately, I am missing the height of the blooming season in my garden.  Maybe next year I will stick around.
at August 15, 2012

"
Maybe next year I will stick around."

Well, at least your itchy feet have landed in the "Highlands".

You may have my number, sir.