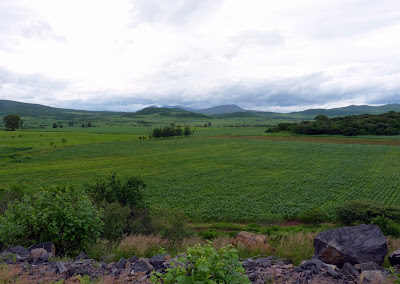 There are those who claim San Miguel de Allende is magical.

Well, the trip from here from Melaque certainly was.  I felt as if I had passed through Ireland, Germany, and Arizona.

Even though I know the way to Babs’s house in San Miguel, I decided to use my handy Garmin GPS.  So, late on Monday night therein lies a Christiesque clue), I programmed her address into my navigation brain.  I checked the screen to ensure the destination map showed her house on the hill.

For years I have been told that the best way to get to the highlands is to avoid Guadalajara’s main streets by taking the southern ring road to the airport.  In the past, I have missed the turnoff.

On Tuesday, I was prepared.  At the beginning, it appeared to be a wise choice.  Until I ran into a number of towns with multiple topes and then at least three extremely congested areas.  All the time listening to the snooty English voice on my GPS tell me I was not on its preferred route.

I got to see some new territory.  And now I know the way to Lake Chapala -- if I ever get around to visiting.  But I doubt I will take the “short cut” again.  If I saved any time, I did not notice.

As soon as I left Guadalajara, I was on one of Mexico’s greatest assets -- the autopista.  Mexico’s autobahn.  For the equivalent of $60 (US), I had access to a smooth four lane toll way with a legal speed limit of 65 mph.

But the speed is, in practice, merely a suggestion.  I drove between 70 and 80 -- and was passed by every vehicle on the road, with the exception of trucks climbing grades.  The trucks would then pass me on the down grade.  The cost of almost every Mexican-plated car I encountered easily exceeded the cost of my Escape.

At three tollbooths I encountered a new experience.  I am accustomed to Army checkpoints around Melaque.  In four years, I have never received anything but the most cursory of questions.

My lucky streak is now broken.  The roadblocks west of Guadalajara were manned by Federal Police -- the good-looking, tough-natured guys who look as if they could play cops on television  I suspect they were looking for narco traffic.

But they may have been looking for something else, as well.

On the first stop, I was waved through.  My usual experience.

At the second stop, the police officer asked where I was going, where I had come from, and how long I was staying in San Miguel de Allende -- carefully using the full name of the town.

At the third stop, I discovered how people feel when the police stop them for no apparent reason.  He asked the same “where from, where to” questions – in very good English.  He then wanted to see my driver’s license and the “papers for the car.”

When I showed him my Oregon registration, he said what he wanted were the tax papers.  Fortunately, I had a copy of the tax form I received when I brought the car into Mexico.

He then wanted my passport and my visa.  I never carry the originals of either, but I do carry color copies.  He was not interested in copies -- informing me that the law requires me to carry both with me at all times.

I thought the lecture was over until he told me I needed to call someone to bring the originals before I could proceed.  When I told him there was no one I could call, he shrugged.

There may be some of you who think you know where this is going -- cooling my heels while he waited for me to offer him pesos.

That thought never entered my head.  And I doubt it entered his.  He certainly gave no objective indication that was his intent.

But I was convinced I was going to spend the rest of my trip beside the road -- or in the local hoosegow.  He talked with another officer and came back over to me, saying: “You can go.”

However, when I travel up this way again, I am going to ensure my papers are in order.

Off I went.  The route seemed a bit different.  I am accustomed to encountering scenery of multiple shades of brown.  But not on that Tuesday.  Everything was green as a result of this summer’s rains.

Take a look at that photograph at the top of the post.  It could be County Kerry.

And then the scenery changed to lakes.  Lakes that I recognized.  Lakes that are just north of Morelia.  I had been on that road before.  When I returned from Pátzcuaro last year.

I knew that could not be correct.  My GPS had taken me too far south and finally terminated my trip in Tarandacuao -- a quaint enough Mexican village.  But it was two hours away from San Miguel.

So, I re-programmed the GPS (you have probably already guessed that the destination was operartor error -- mine) and drove through Acambaro and Celaya to eventually get where I wanted to be.  Two hours late.

Fortunately, I did not inconvenience Babs and I saw a bit of Mexico I had not yet explored.  (I could give Celaya a miss.)  In fact, I saw some interesting farms around Panindguaro worthy of a return visit.  Some crop is in pastel bloom -- worthy of a Cézanne landscape.

But I am now ensconced in Babs’s guest house.  And ready for my two weeks in San Miguel – including the last weekend of the Chamber Music Festival.

Well, at least this time the GP didn't take you through the field on dirt paths up near the old Gigante like it did last year!
Maps are better.......I think.
This is always a beautiful time of year to travel in Mexico.  Either during the rainy season or afterwards. It will be green and magnificent til November.  Enjoy!

Like you, I prefer maps. But the GPS is a great tool for some driving. As long as I program it correctly.

Steve, given the dodginess of the aging Escape and the general hassle of driving, why don't you take the bus? Mexico has a terrific system of inter-city buses, and cheap taxis a-plenty for when you arrive. I've gone all over via bus, and it's ususally a much more relaxing experience than driving. You can read, look out the window, sleep, listen to music -- all much more relaxing than fighting topes and federales.

Hope you enjoy your trip, and please send my regards to Babs,

Kim G
Boston, MA
Where we are starting to get a hankering to go back to Mexico again.

It is a good suggestion.  But I enjoy the convenience of having the Escape at my beck and call.  I would be hard pressed to find transportation for some of my little excursions into the fields around San Miguel.

You find value in relaxing.  I get an adrenalin high out of driving in Mexico.  That is why I did not mind the extra two hours of driving on the trip over.

It is too bad you are not in country.  It would have been nice to visit with you again.

I enjoyed this blog very much.  Following your life in Mexico is a real education.

I think those checkpoint hombres go through waves of more and then less red tape - Sometimes it is a reflection of what is going on in the U.S. like the current red tape that is supposedly a deal for Mexican illegals that were brought in by their parents.  After reading the details I imagine there will be few takers of that two year deferred amnesty - what happens after two years? Now they know where to get you - times up  Probably backlash from that.

It costs $60 (US) to drive on the autopista? Is that the total through 3 tollbooths?  Just curious.

Hi Kim - Hope you head up here some time too.  It's worth a free cup of coffee, at least!
Babs

John, I think its determined by the level of boredom that day.  Can you imagine standing out there all day, in sun and rain with hardly anyone to talk to?  At least that's how I approach it - not that they are trying to hassle me.  It has worked so far......

I sincerely look forward to our next meeting!  Hopefully it won't be too far away.

I'd love to meet you some day. Hopefully not too far into the future!

Damn Federales!  You're an American, you don't need to put up with that nonsense.  Next time, simply drive away.  What are they going to do?

Least you got there one piece.
Remind me ,never drive that route,one that you just took.Ha.

Enjoy your time in San Miguel. and your music.

What do you mean by next time having your papers in order? What will you do/carry differently?

Enjoy SMA - I'll be there in January and am counting the days!

Steve, have you gotten an INAPAM card? At 60 you can apply...bus fares are then half price should you decide to use the bus.

I have this thing about using coupons and discounts.  I just don't.  No good reason.  Well, there are reasons.  And reasons that are good for me.  But suffice it to say, I will most likely not be getting an INAPAM card.

Next time I come up here, I will dig my FM3 and passport out of the safe.  Of course, I will most likely then forget something else to please the "papers, please" crowd.

So far, the music has been nice.

I seem to remember a movie scene like that.  Butch Cassiday and the Sundance Kid, I think.

After the performance tonight, I am going to tey one of San Miguel's eateries.  So far, I have been eating my own cooking.

There were 8 toll booths between Manzanillo and Celaya.  With tolls rangingfrom a low of 46 pesos to a high of 148 pesos.  I think they vary due tothe length of the tollway section.  But it was worth every centavo.

On Tuesday they had plenty of people to talk to.  A long line being interviewed and several cars being partially disassembled.

The newspaper reported that there were huge lines for counseling and not very many applications submitted electronically.  If I was in the group, I am not certain I would out myself until something more substantial came along.

I trust it is far more amusing than educational.

As you probably already know, you can look forward to a very pleasant meeting.

I was once travelling from San Miguel to Umecuaro and was pulled over by the police just outside Morelia. I couldn't figure out what I had done as   I wasn't speeding and always signal etc., but I had all may papers and drivers license ready when he approached the car. He did not speak English, but smiled at me and asked how I was. I told him that I was fine thank you and asked how he was. He told me he was fine and then commented that there was a lot of mud on my car (also an Escape). I said that I was staying in Umecuaro and that there was a lot of mud there at that time of year. He smiled again, said okay have a nice day and left, never having asked to see my drivers license or car papers. I have still not figured that one out.

Having met you, I have a theory.  Probably one of the reasons Todd married you.