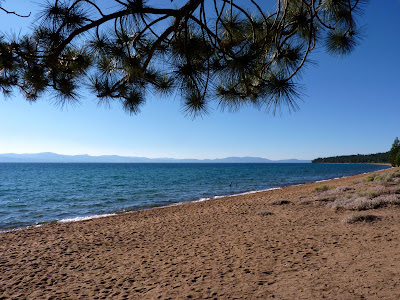 If this is Friday, I must be in California. I think.

My trip to my home in Nevada was two-fold. First, I needed to get my new driver’s license and register to vote. Both were completed by the end of the day on Tuesday. My license and voter registration card will be mailed to my Nevada address within ten days.

But the second reason is far more important. I have not spent much time with my friends Roy and Nancy recently. True, I went to China with Roy in February. But Nancy has not been part of our adventures.

We resolved that on this trip. And, with the exception of a dinner and late lunch, we relied entirely on each other’s company to keep us amused. And a battle of wits we had.

Thursday morning Roy and I headed off in his road car on a trip to Los Angeles.

Starting at about 7000 feet above sea level and unseasonably warm weather. Lake Tahoe usually does not have summer temperatures above the 70s.  When we left at 9 AM, it was over 80.

But the scenery driving out of the mountains could have provided a geology class with material for a full year.  The glacier-grazed granite was everywhere.

Then came the long drive through the San Joaquin Valley.  I was stationed at Castle Air Force Base near Merced in the early 1970s.  For an Oregon boy, it was a big change in scenery.

But I quickly came to appreciate the prairie beauty of the wide valley.  Unfortunately, I seem to have lost that appreciation with time.  Or the valley has changed.

The valley struck me as being particularly brown.  And that brown was punctuated with political signs planted near dead orchards and bare fields.  The message was that Congress's policy on water was creating another dust bowl.

I suspect the message was exaggerated -- as almost all political positions are.  And water policy is always complicated.  But the message was clear.  Some farmers are particularly angry at Democrat congressmen.

So, we decided to head over to our mid-trip destination -- Morro Bay on the Pacific coast.

We were only half way through the mountains when we noticed the temperatures dropping. Around 60 when we reached the beach. And, not surprisingly, we were greeted by a heavy fog bank.

I visited Morro Bay about 40 years ago. It is a far nicer place than I remember. A little bit of New England pasted on the California coast.

So, here we are for the night after a great dinner. 7000 feet lower in elevation, and a temperature difference of over 50 degrees between the valley and the beach.

Who says that California is not filled with extremes? 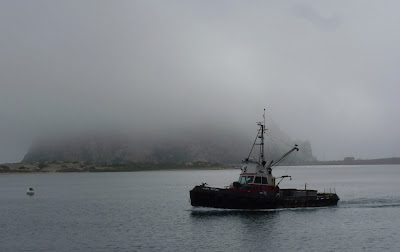 48 straight hours of Ernesto rain here - we feel like this year has been the most rain in the last 7 here.  Quite different than much of the U.S.

Have a safe trip amigo.

C A,even  with all the beauty they posses it lost me about 11 years ago.
Only thing I miss about C A, fruit trees I had in my back yard.

San fran. I miss sometimes,live there about 6 years ago  as single woman.
I had wonderful time with my  Husband.
You would call me,  Yuppy(?) back then.

The county, I live now, closer to Washington D C then call it self V A.
But when you drive about less then 1 hour,it's beautiful just like your home town.

So far, it has been a great trip.  And without rain.

I run into a lot of people who are happy to be from California.  Including several bloggers.

I did not make much senses last comment.
I meant to say My current Husband.

Even after 40years ,Lets just say ,I am belong to the world.Ha Ha!

We left C A. main reason was their liberal policy and school system for our Son.

Stay safe while you are on the road.
I always look for your reply it's muss's me.

Do you still plan on being in San Miguel de Allende on Monday evening?

I meant, muss as your quick wit.

Wow, you've really covered a lot of ground. You'll need a rest when you get here to San Miguel.

Where was the first photo taken? It's a pretty scene. Oceans have so many faces -- regardless where, bountiful beauty.

Looks like Lake Tahoe.  The sand.  And the pine.

I love the picture. I have briefly toured some areas of California. I marveled at the diversity. Enjoy your trip.

I shall.  Tomorrow I board the big bird to fly to Manzanillo.  Then I am off to San Miguel de Allende.

I may sleep for the full two weeks.  And that will be fine.

Thanks for your best wishes.

As opposed to his SUV -- which would not be a road car. His Back to the Future car was in the shop.

What a wonderful trip... I have not driven through the US in decades but reading your descriptions makes me want to do so... maybe next summer? And so... will you double back in order to take in the wineries?

No wineries on this trip.  Mexico calls tomorrow morning.

The way I see it, if you're gonna build a time machine into a car, why not do it with some style?