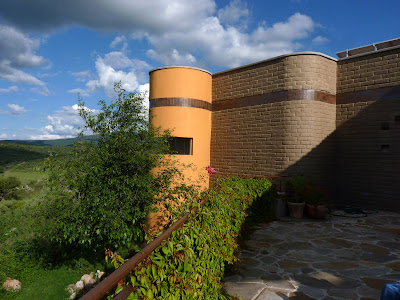 I am not a planner.

It is just not in my nature.  And when I do it, I sound like an obsessive-compulsive in a 12-step program.

Choosing where to live in Mexico is just one example.  I have drafted several posts (making the grade), complete with lists and charts, chronicling the thought process that led me to Melaque.

Of course, it was all baloney.  Post hoc ergo propter hoc baloney.  All I was doing was justifying my decision after the fact.

Not that it matters.  I have found joys in Melaque that I never could have predicted.

When I travel, I realize there are activities I thoroughly enjoy; and I miss not having them in Melaque.  The cultural events of San Miguel are the most obvious.

But some sneak up on me. 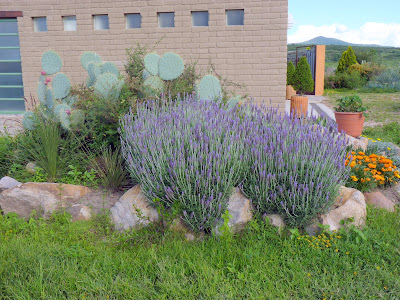 Rancho Santa Clara is a thirty minute drive from San Miguel.  But a world away.  I think of Melaque as being in the country.  But this was the real country.

A harmonious balance of traditional adobe and Wright-inspired Prairie details, the house takes advantage of the panoramas -- one of the virtues of country living.  But the chief virtue, for me, is the sense of solitude.  Not monastic solitude.  But that feeling of being content with one's place in nature. 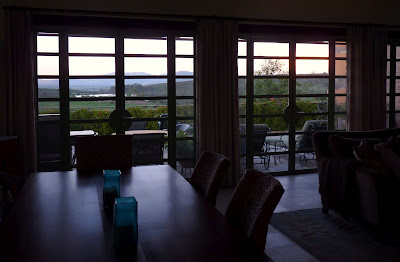 Nature there is aplenty.  The first thing I wanted to see was Stew's bee hive.  Al has written eloquently of Stew's relationship with his bees.

I was not disappointed.  I have long been fascinated with bees.  My grade school friend, Neil, had a bee hive on his property -- along with a pet skunk.  Watching the bees shut down their home for the evening brought back a lot of misspent youthful adventures.

As we sat on the patio dining on cold beet soup, a mixed green salad with tomatoes fresh from the garden, grilled salad, and a tangy potato salad, I realized how much I enjoyed a style of life I do not have in Melaque.

And it was not just the view.  Or the food.  Or the company.  Or even the scintillating conversation.  It was the feeling of belonging in a place and time.  What we Quakers call finding peace at the center.

Of course, I did not really want to be the lord of Rancho Santa Clara.  It is not a place for a single guy.

Sharing the experience was enough for me.  But I need to file it away in my "what do you really want?" file.

And, like every place, Rancho Santa Clara has its thorns.  In this case, real ones.  I suppose as defensive mechanisms against grazing animals.  And very effective on the arms of unwary visitors. 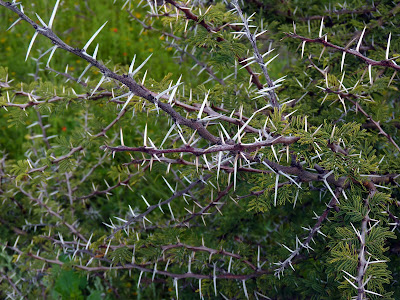 Perhaps those scratches were simply a reminder that there is no perfect place to live.  But we can continue enjoying the pursuit.

And to thank people like Al and Stew for graciously sharing the peace they have discovered.

Amazing stetting  and place - need more photos! For sure the thorns were a wake-up call from getting too entranced - easy to see how that happens.

How great that you got to have that evenining. I just started reading their blog and I can see the pull of their life!

And, of course, the best part of the evening was the company -- as you know from Al's blog.

It is a tempting choice.  But not one I would make living on my own.  I lived on a ranch on my own for three months in the 70s.  It was just a bit too isolated.

Perhaps the "center" is San Miguel and not necessarily the "out-land"?

I doubt San Miguel is in my future -- for a lot of reasons.