we don't need no stinkin' sparklers

San Miguel looks as if it is about to indulge in a fit of patriotic frenzy.

It is.  Independence Day on 16 September.

And the Mexican entrepreneurial spirit is not to be denied.  Almost every street corner has a vendor ready to sell flags, straw dolls in patriotic colors, or other geegaws that would look at home at any political convention.

I am currently in the heartland of Mexican independence.  Even though there is a controversy about where it all began.

Some claim Querétaro where the first stirrings of Creole resistance were discussed in polite drawing rooms.  Or San Miguel de Allende where the details of the actual conspiracy were hatched and where the insurgent military forces assembled.

Dolores Hidalgo is only 18 miles north of San Miguel on a well-maintained road.  My first visit was in February of last year.  The place had the feel of Someplace Important.  As if the central area had been preserved in amber.

In contrast, on Thursday, you could almost feel electricity in the air.

Most people come to Dolores Hidalgo to see the spot where Miguel Hidalgo raised the cry (Grito de Dolores) for Mexicans to overthrow their Spanish masters.  And, in a pickled sense, the sights are still there.

Hidalgo was one of several Creoles who had conspired to rise against the Spaniards in December 1810.  But their plans were disclosed to the Spanish authorities in September.

To avoid being arrested, Hidalgo ordered the bells of his church in Dolores, where he was he parish priest, to be rung at 6 AM on 16 September.  When the town folk showed up to find out why they had been roused from their beds, Hidalgo spun his congregation into moral fervor.

We do not know exactly what Hidalgo said 202 years ago, but we do know he ended his call to arms with: "Death to bad government and death to the Spaniards!"

That is Hidalgo at the right.  Looking like a cross between a Roman senator and Jeanne d'Arc.  But that is what mythology can do to a humble priest.

The church is part of Mexico's secular mythology.  As a result, just like Independence Hall in Philadelphia, the church and the neighboring secular buildings are spiffed up.

On the corner of the municipal palace is a balcony with a symbolic bell.  At midnight on 15-16 September, the local poo-bah will ring the bell and recite a stylized version of Hidalgo's speech.

Below,  a mass of flag-waving citizens -- all ages, men, women, children -- will wait for their leader to list an ever-changing list of Mexican heroes.  And, after each patriot's name, the crowd will yell: ¡Viva, Mexico!There were two differences between my visit eighteen months ago and this visit.

The first was people.  My first visit found very few people in the church or in the park in front of the church.  On Thursday, there were people everywhere.  Strolling.  Sitting in the sun.  Eating ice cream.

The second difference was easy to see.  And it may have been why excitement seemed to hang in the air.

The city was decorating the buildings around the square with the national colors.  It may have helped that the decorations looked as if they could have substituted for municipal Christmas decorations in Des Moines. 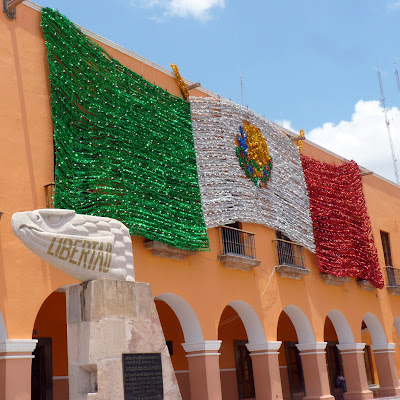 When illuminated at night, these decorations are truly a joy to behold.

Unfortunately, I will not be in the area for the celebration.  I may be in Morelia -- a city that has experienced its own tragedy associated with independence celebrations.

But, wherever I am, I will join my Mexican neighbors in celebrating their independence by adding new layers to the national mythology as fireworks and fire crackers -- and static illuminations -- enliven the night.

Ay, you have me feeling homesick! This is one of my favourite times of the year in Mexico. In fact it kicks off my favourite half of the year. Independence, then Day of the Dead. Next it's Christmas, then before you know it the Jacaranda trees are in bloom.

Like you, I enjoy the rhythms in life in Mexico.  The celebrations can be predicted, but there is always something new to be found in them.  We need t get together when you return.

So very true. I used to find new joys and wonders, no matter how many times I saw the same thing. And absolutely....have you got any plans on visiting DF lined up? It was a shame we just missed each other last time.

I seldom make plans these days.  But I do want to get back to Mexico City to see what I missed on the last trip.

See you in Morelia, if not in Pátzcuaro, Steve.

I look forward to it.

You will need a couple of lifetimes to see it all.
Saludos,