Yesterday while waiting for church service to begin, I wandered to the edge of the parking lot to see if I could capture a panorama of some of San Miguel churches.

Oxford may be the city of dreaming spires.  But San Miguel is the town of Freudian imagery.

Of course, the weather was not going to cooperate.  I either had a blotchy shade or sun with washed-out clouds in the background.  I waited patiently for the shot.  And this is what I got.

When I saw the final product, I remembered my blogger chum Billie complaining that she felt most of her photographs had turned into one cliché after another.  If you have seen her work, you know how wrong she is in her self-criticism.

But I know what she means.  It is really difficult, when wandering around with a camera, to avoid getting caught in the Mexico of clichés.

Anyone who has ever tried to capture the spirit of Mexico with a camera understands the problem.  Old man with burro.  Piled pottery.  Peculiar church façade designed by an amateur and inexplicably loved by tourists and locals.

All of that is Mexico, of course.  But Mexico is also an amalgam of its less-celebrated parts.

For example, take a walk through my favorite church in San Miguel.  Santa Ana.  It gets no rave reviews from tourists.  In fact, it does not appear in most tour books.

Its exterior looks like one of those sixteenth century churches built in Yucatan by the first wave of priests.  Part ark.  Part fortress.

But it is a relatively new addition to the local church community.  It was built in 1847 -- right in the middle of the Mexican-American War -- as the church for a homeless children shelter.

When I was here last year, the church struck me as a very special place (faith, friends, fiesta).  And it is.

Part of it is the reverence people show when visiting.  It is a place of worship.  I was the only overweight white guy with a camera in the church during both rather lengthy visits. 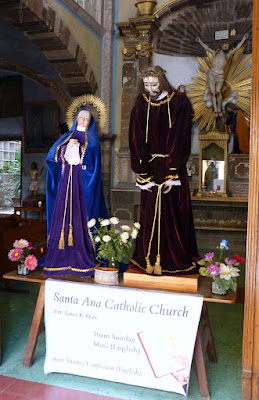 But there are other reasons.  I admire the plain exterior.  No windows.  No steeple.  Just sturdy plain walls -- looking as if they may have been painted by the local French's mustard representative.

My Quaker soul is always pleased with humble worship space.  But it is more that that.  The church is a bit like the less-attractive sister who develops genuine charm rather than a shallow façade.

On this trip, I took a closer look at the church.  The church has a small courtyard with what looks like a columbarium.  I found that a bit surprising because I thought the Catholic church was opposed to cremation.

A man was sitting at a desk near the back of the church.  When I asked if he could speak English, he looked up me with that type of glare designed to deter curious tourists.

But I persevered and tortured him with my Spanish.  And that was good enough for him.  He joined me in the courtyard to answer my inartfully-constructed questions.

From what I understand, the courtyard is a sanctioned columbarium.  The church's position on cremation is -- well, how do I say this diplomatically? -- complex.

While I had his attention, I asked him about the modified flying buttresses on the church's courtyard wall.  They looked structural to me, but I thought they might have been archways for a demolished portion of the orphanage. 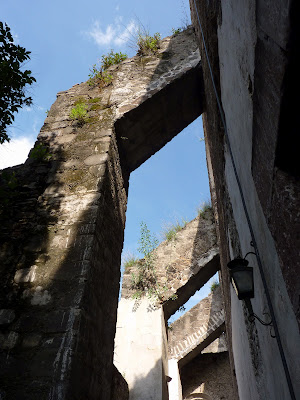 My helpful guide informed me they were structural.  When I asked him why there were no buttresses on the street wall, he took me outside to show me the brick pillars that perform the same function, but through different engineering dynamics.

I may have missed a few of the subtleties due to my limited Spanish skills.  But he taught me two new things about Santa Ana.  Both its function and its form.

And, of course, that is how we avoid cliché in life.  By learning something new about our surroundings each day.

If my photographs reflect nothing but cliché, that is fine with me.  As long as the life I live can rise about it.  Now and then.

But also to remember that these buildings serve a real purpose in offering care to the needy.

Your conversational spanish must be advancing, since you're having engineering discussions with a stranger.  "Buttress" in spanish.....not sure how I would have "signed" that one.

And today is a perfect photography day - and I have a cold.

When I visited Ecuador, in my youth, my mom and I always went either  to a small church in the old city of Quito (I was the only tourist) or took an hour bus ride out to the country. There was a huge, ancient convent one of my aunts lived in, its place of worship within the courtyard quite extraordinary--part of the service often in Latin. The inside of these churches were always very dark, had old wooden pews that squeaked, you had to sit very still, and real candles that lit the many carefully placed statues and faded paintings. I never tired of closely looking at the details. The aroma of frankincense lingered on my clothes the rest of the day, and I always left with a profound sense of peace.

Your Spanish must be good.  About cremation in the Catholic Church:  many years ago it was not OK, philosophy being we needed to have a body to be reunited with our soul in heaven.  I think eventually the Vatican came to realize the irony of that stance.  It has been allowed since the 70's, probably as a result of Vatican II.

I am multilingual in Mime.  Thus I miss some of the finer points of conversation.

Thanks for the update on Catholic cremation.

Some of those treasures still exist.  The big tourist church in San Miguel seems to have lost that sense of peace.

Your photo of the street and the side of the Santa Ana church does indeed look like it could have been taken in Mérida. and the columbarium on the church grounds or even inside the church is very common in Yucatán. Cremation is very accepted here and has been for some time. When my mother died, I was given the "official position" by the parish priest. Cremation is allowed but the ashes must then be deposited in a consecrated site... so no scattering of the ashes at sea, in a meadow or the like.

And thus the columbarium.  Living here is educating me in ways I never anticipated.  Imagine what a stay in Florence could do.