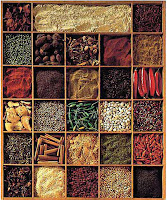 I remember my first curry -- as if it were yesterday.

I was living in England in the 1970s and had driven to Winchester to see the eponymous cathedral of song and the legendary round table of King Arthur.  The latter a bit of medieval P.T. Barnum hucksterism.

After a full morning of naves and knaves, I looked around for a restaurant.  There are plenty of tourist eateries in the high street.  For some reason, my eye landed on a menu in the front window of an Indian restaurant.

To me, that sounded exotic.  My experience with Indian food in Oregon was bison and fried bread.  But this Indian food was a continent away.  The cuisine of the Raj.  And it was as foreign to me as -- well, Ethiopian food.

What fascinated me about the menu was that it divided its curries into nine separate divisions of spiciness using the subjective terms mild, medium, and hot.  Mild-mild.  Mild-medium. Mild-hot.  Medium-mild.

You get the picture.  Up to hot-hot.  A veritable cuisine caste system.

I love spicy food.  And this looked like an interesting challenge.

I sat down at a nicely-appointed table.  The waiter brought out a pitcher of water and a glass, and asked what I would like to order.  I think it was a chicken curry of some sort.

He then asked me how spicy I wanted it.  I may have been young, but I knew the nine categories had a purpose.  So, I proceeded with Jerry Ford caution.

He gave me a quick look over and asked how familiar I was with Indian spices.

In those plummy rounded tones that only Indian waiters and Midland earls use, he said: "Perhaps the gentleman would have a more enjoyable meal with mild-medium."

It sounded like a recommendation from a man who knew his stuff.  I told him to bring it on.   Or maybe something a tad more urbane.

I now know enough that what I was served was a dry curry.  Large chunks of meat and vegetables in a sauce the color of hollandaise gone bad.  But it smelled marvelous.

So, I grabbed my fork and dug in as if I had just spent a long day driving cattle on the Chisholm Trail rather than wandering among grave stones.  It was a big bite.

What happened in my mouth was one of those amazing taste explosions that end up etched on the culinary hall of fame in the back of your head.

Chicken.  Potatoes.  Creamy textures.  And just a hint of the exotic spices of an open-air Indian market.

Well, that is what I experienced for a nanosecond.  The next wave was not quite in the hall of fame category.  I felt as if my tongue was ground zero on Bikini Atoll.

If I had known that the spiciness in curry derives from the capsaicin in chili peppers, I would have known that attempting to drown the oils was futile.  Water merely exacerbates the heat.

My waiter had been watching every movement.  Behind his stoic exterior, a smile was romping through the fields of anti-imperialism.  He brought another pitcher of water and retreated to the sidelines for the remainder of the performance.

I ate the rest of my meal a bit more delicately.  And enjoyed it.

Since then, I have learned a lot about curries.  How to recognize a bad one (the usual variety found in North America) and how to appreciate a good one.

On Wednesday night, I had a good one.  My message board acquaintances Verne and Elke had informed me that Cafe de Flores in La Manzanilla was open summer hours.  Monday to Wednesday.  6 pm to 9 pm.  And the food was both creative and excellent.

Because I had not sat down and talked with them recently, we decided Cafe de Flores would be the place.  And a good choice it was.

Alex, the chef, has made a wise decision by limiting the menu choices.  A menu with few choices tells me that the food is going to be fresh -- and something special.  And it was.

There was a beef salad, a coconut sole, and a red Thai chicken curry.  Of course, the curry caught my eye.  Especially with the Thai modifier.

Unlike my Winchester dry curry, this was a wet curry.  A large bowl filled with chicken and potatoes and a red aromatic broth.  With a light cured cucumber salad and a ramekin of rice on the side.

I tried the broth first.  It was a bit spicier than my Winchester experience -- and much more pleasant.  Experience has taught me to savor spicy.  And the large pieces of chicken breast gave themselves up as if they were ethereal.

It was excellent curry.  And more than enough to fill me for dinner.  The remainder followed me home for Thursday's breakfast.

Our stretch of coast loses a lot of its better restaurants in the summer.  But the better reason for eating at Cafe de Flores is that it offers a great meal.

Of course, I had two great dining partners, as well.  And that is a perfect way to spend the evening.

If I have figured this right - you were pretty much mid-dosing of Vermox on Wednesday. It seems like curry would be a real challenge to that process - no?  Or do I have my days wrong?

Funny you should mention that London curry. I love curry, and I love spicy food. I have no trouble in Mexico. However, I was in London in 1976 with my second wife. We stepped into an Indian restaurant and ordered something or other. I forget what. What I will never forget was what happened after the first bite. It was a memorable moment, but not one I would ever want to repeat. The Bikini Atoll is a good comparison.

How on earth do those people eat that regularly? How do they appreciate any subtle taste differences at all? I often ask myself the same question about Mexicans who kill virtually all flavors with endless chili peppers.

Each Friday morning I meet with two guys at the equivalent of a truck stop restaurant.  At the next table, there is always one Mexican truck driver eating a plate full of serrano chilies.  Nothing else, just serranos.  It would certainly be beyond my spice capacity.

You have your days correct.  That may explain why I spent most of the day yesterday with an annoying bout of hiccoughs.  We will see if I do better at breakfast this morning.

as a poor student in England I could not afford to eat out too often but one of the great deals was Indian food! In manchester , in those long gone days, the curry came in a seperate dish from the rice and if you run out of rice more was brought  at no additional cost so we all would eat the rice and make sure there was plenty of sauce left and keep eating till full!
When I  started eating curry, it was the mildest but over time graduated to suicide although I still will have a mild  just as often as hot, it depends what meat it comes with.

Alex's curry was excellent. I spooned some of Vern's curry broth on my plain rice and it really went well with my coconut crusted sole with Papaya Sweet Chili Sauce.

Did the meal come with naan bread to dip in the curry sauce?

Curry was really invented in England. It's the most popular style of food there except for jellied eels.

(I'm sure that you sense that I'm joking.)

But you are not off by much.  What passes for curry in England (and North America) bears little resemblance to south Asia curries.  Certainly when it comes to spiciness,

No.  But my rice went into the bowl to serve the same purpose.  It was truly a Thai, and not an Indian, curry.

It was a great night.  Both the food and the company.

I did discover, though, that curry served in most English homes is as mild as macaroni and cheese.

It sounds delicious. My favorite is, of course, lamb curry. But chicken works as well, it will go on my to-do list when I am in La Manzanilla.

For the summer, she changes the menu weekly.

And believe you me, I understand all of that.  :)

At last I have found another person who does not eat the usual American breakfast, eggs, bacon and toast. Whatever my daughter has for dinner, is also going to be for breakfast, sometimes just cold, even if it's pizza.

There is nothing better than cold pizza for breakfast.  Pepperoni, linguica, and onion, if possibe.

I'm with Roy on this one...Bacon and eggs.

If God had wanted us to eat eggs for breakfast, He wouldn't have given us the pizza oven.

My first curry was with Indian friends who had an apartment below my lodgings. They cooked a lot, and they filled the place with odd smells. Even my clothes from the laundry room smelled of curry. They served a slightly spicy wet curry but with lots of rice and warm yogurt. I didn't like it at all. Never developed a taste for it but I can eat it when required. I think it was the days upon days of the smell malingering in the building.

Senor Don is not wrong about the origin of at least one class of Indian curry, largely an English colonial invention from the days of the East India Company, if one wishes to believe Timothy Parsons in his book on empire.  I'm sure there are all sorts of curry throughout Asia which predate the EIC, but there is a sub-class of curries which have their basis in English colonialism.  I am no curry historian nor do I make a fuss about them.  I like some of the curries from Nepal and some from the Philippines and some from China, and some from Fred Meyer.  And I always prefer them excruciatingly mild mild mild with a hint of milder yet.

There is one thing better than cold pizza for breakfast:
cold beef stroganoff.

You can take the boy out of Walla Walla, but ---

I rather liked that myself.

Some food smells seem to accumulate.  Boiled cabbage and curry are two that seem to top the list.

We recently lost our Sri Lanken restaurant, Dila. Dil, the Sri Lanken owner and chef, has a marvelous culinary talent. Sadly he has taken it to  Canada in hopes of finding more reliable patronage. The restaurants here in San Miguel are also subject to the swings of tourism. Dil and his wonderful curries will be greatly missed!

I am looking forward to my return to San Miguel with its variety of restaurants.  And shocking menu prices.

it will only confuse him.