weevil under the sun 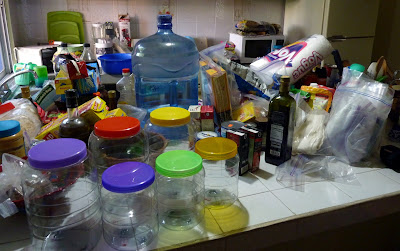 Well, I am never going to get the part of Doctor Niles Crane if my kitchen counters look like this.

I am not a neat freak -- by any stretch of imagination.  But the photograph at the top is this post is a bit over the top.  Even for my kitchen.

As you may have guessed, there is a story buried somewhere in that pile.

Before I left on my cruise, I discovered something a bit unappetizing when I changed out one of my large water bottles.  There were black oblong objects floating in the remains of the water.

Several options ran through my head.  The first was that mice or the omnipresent geckos had been using my water dispenser as a toilet.

But that made little sense.  Even though the space between the dispenser and the water bottle is not air tight, it is close.

A cursory look convinced me they were rodent turds.  Probably in the bottom of an errant bottle that had not been thoroughly cleaned.  Not to worry.  Worse things show up in water around the world.

Today, I switched out my first bottle of water since I returned from Dubai.  And, once again, there were the same black objects.  But more.  Five or six on my first discovery.  Between twenty and thirty today.

This time I took a closer look with a magnifying glass.  They were small insects of some sort.  I checked the wall behind the water dispenser and discovered the culprits.  Little beetles.  Lots of them.  Who had drowned while slaking their thirst.

And I knew immediately what they were.  With their Cyrano snouts.  Weevils.  We had a bout with them at our house in Milwaukie when I was in grade school.

I knew the routine.  I had to take everything out of the pantry.  Food.  Bags.  Linens.

Almost immediately I discovered the source.  A bag of popping corn and two boxes of spaghetti.  The weevils had set up a colony and were reproducing like mad.  Weevils make cockroaches look like childless Manhattanites.

Armed with bleach, Raid, and garbage bags, I picked my way through the food.  The shelves came out for disinfecting.  And I then laid down enough Raid to qualify for a reenactment of the second battle of Ypres.

Four hours after I sprayed, the weevils were still wandering out from their hiding places.  And even with direct blasts of Raid, they seemed to be going on their merry way until my index finger directed them to insect hell.

I am going to wait a bit before I start putting things away.  I want to be certain I have killed as many as I can.  I will simply have to accept the fact that once the weevils have invaded, they will have the patience of a communist operative in a London art gallery.

And when I store my goods, I am going to do what I should have done earlier.  I will put things such as beans and pasta in the freezer for a couple of days to freeze the bugs and eggs, and then repackage the food into airtight containers.

I thought I was going to escape the weevil terrorists.  I knew better.

And that is exactly why we bought a second fridge. i keep all my pastas, beans, grains, flours there, and of course a healthy laying in of beer and wine.

Sounds lovely. I'd recommend going to your local hardware store, buying a caulk gun and caulking up every crack and crevice you can find. When I lived in Houston, that was my tactic for dealing with cockroaches without having to immerse myself in a pool of chemicals that was more toxic to me than to them. It worked surprisingly well.

Kim G
Boston, MA
Where our big regret is not fumigating the current house after buying but before moving in.

But those little devils (or their cousins) are a nuisance in temperate areas, as well.

The problem with weevils is that they arrive in egg form.  I just need to remember to freeze all flour, beans, pasta, and the like for four days and then store it in airtight containers. Or use it when I buy it as my neighbors do.

I have always liked the idea of having a full larder.  I may need to change that attitude.

Mexico can always be counted on to deliver up more stories.

Most of the pasta that went bad was in boxes, not even in sealed bags.  I created my own science fair project.

Keep as much as you can in the fridge and freezer, people in Florida have to do that as well. Of course investing in an AC unit may keep the critters at bay, and help you sleep better.
Throw those water bottles away, (ugh, gross), and buy bottled water.

And lose all these great stories?

I only see what looks like peanut butter and olive oil, in the picture above, what's up with that?

There are lots of other things, as well.

Do you know how many insect parts the FDA allows to be present in peanut butter?  Just more protein.

It's a good thing I don't eat it!
Better look in your cereal box, you might find some "protein" in there as well.

I should probably not write this, because the weevil gods will now infect my pantry, but in 13 years of living with stuff in out pantry, including flour, pastas,etc, we have never had any weevils.
It has only been since about 2years ago that we discovered a few mice had made it in the house, and that was because we leave the doors wide open during the day.
The drier higher altitude must discourage their mating habits or something...
In California we had to toss all the stuff out, which had it's positive results. We no longer stocked up like before, and simply let the supermarket keep the inventory.

The cereal usually disappears in a couple of days.

I like the idea of letting the market be my warehouse.  But that will mean passing up buying several packages of the artisan pastas when they make their infrequent appearances on the shelf.

I suspect that the bugs we find in food made from grain have been there from the time it left the field. The longer it has been from harvest, the more the bugs get a chance to grow into something we can see. I find them in sealed plastic bags of food, it has to be something other than bugs in the pantry reproducing and infesting my stuff.

I suspect you are correct.  Most weevils come into houses in flour products -- in the egg stage.  That was obviously the case with the bag of popping corn.  The weevils grew to adulthood inside the bag and then couldn't get out.  There were hundreds in the relatively small package.  Enough that they eclipsed the kernels.

I spared you that sight.

My mental picture is gross enough!

I know where you're coming from with the weevils. We have ants. It's an ongoing battle between Todd and the ants that reminds me of the gopher scenario in the movie Caddyshack.

At least my ant battles are outside.

They are just bugs.

We freeze everything for a day or two, also.  Plus I only buy small quantities and put them in plastic jars too.  Good luck!

I remember reading on your blog of the storage process you use.  Listening to your advice would have saved me some time.  But I would have missed a fun post.

There is always space available in pun jail.