things that go crunch in the night

It must be critter week in Melaque.

My neighbor, Bill Gilbert, tells a story of a nocturnal bathroom trip.  He was heading toward the toilet to do what so many men our age must do during the wee hours.  Bare feet.  No light.

On his way, he heard the dreaded crunch.  Under his foot.

He was positive he had stepped on a scorpion.  And he was correct.  Light revealed an incredibly efficient killing machine.

He was lucky not to have been stung.

A day or two later, another neighbor was not so lucky.  She picked up a towel and was nailed by one of the local small beige scorpions that carry quite a wallop in their tails.

A sting bad enough she had to seek medical care.

I have been rather lucky with scorpions.  With the exception of one sting in San Miguel de Allende last year (float like a butterfly, sting like a scorpion), I have enjoyed the status of neutral observer of scorpions during my nocturnal adventures.

Late last week, I found myself in the same position as my friend Bill.  I needed to get up for that trek to the toilet.  No lights.  No sandals.  Even though I should have learned from those who have journeyed before me.

I had barely taken three steps when I felt a crunch and a small stabbing in my right foot.  I would like to say I remained calm.  I didn't. 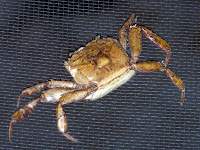 I hopped over to the light switch and expected to see a smashed scorpion.  Not there.

What was there was a smashed land crab (yes, it is that season again) about the size of a ten peso piece (north of the border: think of a quarter).

The pain was from the cracked shell. A small abrasion.  Certainly not worthy of medical attention.

So, will I turn on the light or slip on sandals for the inevitable multiple trips to the bathroom each night?  Probably not.

After all, what type of story begins: "While wearing sandals, I stepped on a scorpion"?

"He was heading toward the toilet to do what so many men our age must do during the wee hours."

Even though it's a short distance to our bathroom, I make a point of donning slippers for those trips.

Flip-flops, si! Slippers? Not so much, unless they are shaken, not stirred.. Ran into an issue in the far east where a little nasty thought my shoe was an over night rest stop on his way to nirvana. since then,flip-flops are the bed side choice..
Dan in NC
(where weave not seen a "nasty" in the house in 15yrs)

Love the time of year when the crabs are invading ...

Scorpion stings are certainly not to be taken lightly, as with bees, the reaction your body can have may be different, even if you have been stung before. Medical care in the tropics seems to be proficient in this kind of matter, and of course, time is of the essence.

Nasty?  I see them as story fodder for the camp fire.

And a lot depends on the type of scorpion -- and how much venom is pumped in.  My one experience was light.

I skipped my usual Hitchcock photograph of multiple crabs climbing my screen door.  But the scraping at night is a bit eerie.

Actually I'd like to see the Hitchcock crab photo.

Mentioning light, UV flashlights apparently make scorpions glow in the night, could picture you wearing those in head gear -- and, of course, to take a picture.

I already use a head lamp for my ant and crocodile hunts.

I never got around to taking one this year.  And the season is now over.

And why would that not come as a surprise.

In Puerto we get the LARGE black scorpions.  I have never been bit - but I have sent a half dozen to scorpion heaven.  Really ugly buggers.

Not to mention walking in the light.