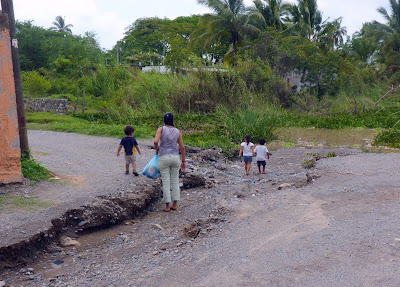 That is what Felipe called it.  Or, more accurately, that is what his former girl friend from the backwoods of Mississippi called it.  A Faulknerian image crouched in the recesses of his mind.

That is also what this boy from Powers would call it.  Those sudden down pours of rain that are so much of a good thing, the ground cannot absorb its fortune.

Whatever divine department metes out moisture decided last night was a good time to let the wet times really roll in Melaque.

We have already had a slight rain.  But last night's light and noise was more like Highlights from Wagner.

And the rain came down.  Around an inch within a couple of hours.  Enough to make Nik Wallenda consider another use for his tight rope.

I grew up in the coast range of southwestern Oregon, where there gullies aplenty.  On the flat lands of Melaque, we are a bit gully shy.  But nature will have her way.

During last year's hurricane flooding, the street in front of our church building was transformed into a stream.  This rain lacked the Noah factor, but it was strong enough to reduce a side street to a diorama of the grand canyon.

At least, we now have a gully to wash.

And, as those of us in Mexico repeatedly point out, there is nothing so welcome as rain.  Especially, on these tropical shores.  Where, paradoxically, water falling through the air reduces its moisture content.

For a few precious hours, at least.

I assume you got all that moisture from Carlotta.  Here in Xico there is never any shortage of rainfall - just had three straight days of off and on rain - lots of inches I am sure.

Don't wish hurricanes on anyone...on the other hand, they bring us rain inland. I'm becoming a bit paranoid about climate change leaving us in a permanent drought or rain shortage in San Miguel.

I am not certain of the source.  There is also a weather system forming off of our coast that has been spitting clouds at us.

We can certainly seem insignificant when we compare our lives and plans with the earth's systems.

Boy, I wish you could send some this way! We still haven't had any rain in San Miguel and our gully, or the arroyo as it's known here, is mighty dry. As is everything else. We have to keep closing all the doors and windows against the dust storms that blow up on the soccer fields behind our house.

I think Steve must have edited his first post as I remember something about one inch in a short period of time.  I'd venture to say we've had at least 5" for the weekend with higher estimates.   Rained most of today also and another Blob off the coast with a 60% chance.

If anyone wonders .... Steve drops all the literature induced phrases when he's sitting across the table from you.  Haven't spent enough time to figure if he is tempted.  I know he doesn't drink but that may be a reason why ;)

We have had over 5 inches since Saturday morning.  It is too bad we cannot channel water uphill.

You are correct about the 5 inches  When I wrote the first piece, it was about an inch.

I save most of my literary references for my writing.  But dinner is always a fair stage for a recital of Bartlett's.

The spitting of clouds is certainly new to me, I think anyway... I hope they feel as soft as they look.

And if we meet again Steve, I might have to bring my iPad to look up your "literary references". :)

The fountain in front of your sister's place looks like an island.  And my street is the river feeding its sea.

That would require an over-night

I always stay "over-night" when in Melaque. It's a long way home...otherwise.

Your rain dance worked, regardless of clothes involved, the drought is no more...

And it feels marvelous.

We got it!  We got it!  For about three hours last night.  Magnificent lightning, thunder and pelting rain.  It's overcast again today.  PLEASE let this BE the rainy season!

If you are getting the storm that passed over us, you should have a couple of days of rain.  We are now in the wind stage.