sunday on the rocks 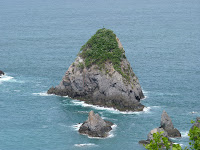 I lose track of time in Melaque.

That is common for warm climates where the seasons are merely variations on a theme.  But my chronological issues are far more specific.  I usually have no idea which day of the week it is.

I stay up until 5 or 6 in the morning, and sleep until 10 or so.  It is almost like being back in college.

And I know why.  I have nowhere I need to be.  No schedule to keep.  No one urging me I need to hurry up or I will be late.  My patio chair is always there with open arms whenever I decide to wander out with my bowl of cereal.  And it doesn't ask me if "I am going out looking like that."

There are two exceptions.  Fridays and Sundays.  And on both days, I need to be specific places at specific times.

Friday morning Dora, the maid, shows up to restore some order to my bachelor life.  Because there is sweeping and mopping to be done, I am shooed outside to play like a bothersome 8-year old.

But I do not stick around.  Friday morning is also my breakfast with two of the Indian school volunteers.  Where thoughts of good deeds mingle with commentaries on art and whispers of local lore.

Sunday is my second schedule day.  Church morning, of course.  10 AM every Sunday.  For the past four weeks, I have been facilitating our discussion on grace, and why that is not the noun people usually associate with Christians.  It has been an interesting discussion.

After church, a group of us (often, all of us in the summer) go out for a late breakfast.  We did that today.

For some reason, I have not been very hungry lately.  About three weeks ago I had a bout of what polite company refers to as gastric distress.  I chalked it up to something I had eaten in one of my dining adventures.  But it has not gone away.

After eating about three bites of my hamburger, I asked the waiter to box it up for later.  I simply had no appetite.

Usually, I would have headed back to the house for my Sunday nap.

Instead, I decided to drive up to the mirador to sit in the sun,enjoy the view, and read The Oregonian, the newspaper I delivered as a boy and can now receive every morning through the magic of my Kindle.

It was beautiful up there.  This is the part of our beach that reminds me of the Oregon coast.  I suspect it is the rocks.  And the mountains that tumble into the sea.

Today should have been a busy beach day.  Tourists from Guadalajara and the towns inland from Melaque usually flock to the beach by the busload on the weekend.

Not today.  Maybe they were scared away by the rain.  Or talk of vegetation on the beach.

I didn't stay long to enjoy the view.  Ever since this intestinal problem started, fatigue hits me in the afternoon.  Hard.

My doctor is out of town until October.  I may stop by to see someone, though, about these bizarre symptoms.  I suspect I may be a housing development for some type of parasite.

Now and then, I hear someone, who should know better, say that we live in paradise.  We don't.  Melaque has its fair share of negatives.  As does the rest of Mexico.  But it is a darn good place to live.

Especially, this table on my patio.  That is quickly becoming my window on the world.

I hope your problem is something that can be healed quickly. Mexico is not a good place to be sick. too much to see, enjoy, do. Well, anywhere for that matter.
Nita

And it is one of those annoying conditions.  Nothing dramatic like consumption or dropsy --two of those Victorian diagnoses that I like simply for their sound.

Vermox Plus is what is recommended here. 1 pill every 6 months.  We next to never have any problems and usually I forget to take it for a year or so lol.It might fix you right up if that is the problem.  You might have picked up a nasty on the cruise ship.

I almost stopped by the pharmacy today to pick up some Vermox.  I will try self-medication before turning this aged body over to the medical profession.  Thanks for the suggestion.

Don't delay going to the Doc.  The time I waited six weeks and had amoebas, I ended up so dehydrated that I was in the hospital for two days........Do something.......

Because of your "rapid transit" problem, I would suggest the vermox twice a  day  x 3 days dosing regimen. You're not yet a candidate for the fecal transplant program( yes there is one) Its science catching up to an old insult!

Something I will do.

Relief is on the way.

I could see why the rocks remind you of the Oregon coast. Melaque does have a very pretty beach and view.

Looks like a professional opinion is in sight  for your  immediate condition -- good thing.

Fasigyn and Cipro for 10 days.

Hope you are feeling better soon.

1. A Mexican woman to take care of you, something they are very good at.

2. An air-conditioner in your bedroom.

I find it one of the most restful views in Mexico.

I guess I should get an opinion on whether this is worms or amoeba,

A quick trip to a doctor may help me to get what I need.

Certain cures have their own side-effects.

And I think at least one of those will require a visit to the doctor -- something, I confess, that I hate to do.

Thanks.  I slept for ten hours last night.  That is very unusual for me.

You mentioned Felipes happiness, his lovely wife bakes garlic bread for him... not such a bad side effect, even I must say, only thing I bake, pillsbury...

If you would like to try a natural cure for parasites papaya seeds and honey. Quarter cup of seeds tablespoon of honey for ten days.

Ten days of papaya would make me want to lecave, as well