eight legs and a shell 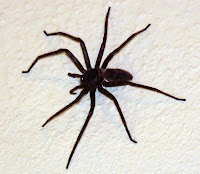 My household has a new rule.  If I get out of bed, the lights go on.

And this is one reason why.

During the rainy season, all types of wildlife prowl through the night.  And my house seems to be the equivalent of a cave -- or a highway.  Scorpions.  Crabs.  The odd cicada.  Ants.  Mosquitoes

I was wandering around sleepless in Melaque about 4 this morning when I stopped in the bathroom and saw a shape on the wall.

I have become so accustomed to seeing crabs crawling up my walls, I did not give it a second thought.  Until I took a closer look.  It was not a crab.  Far too svelte.  But about the size of my hand.

Now, I have seen similar spiders in the house in the summer.  I suspect they come up through the drain.  But I have no idea what they are called.

What I do know is that those legs are made more for running than walking.

I thought I would be clever and rely on a Raid attack.

Not a good idea.  Three strong blasts merely sent it scurrying down the wall and into the living room.  I lost track of it when it climbed the telephone table.  Perhaps to place a call to the tourist police.

Or, more likely, to find either a quiet place to die -- or to hide and make its presence known when I least expect it.

Because I was awake I decided to take a look around the garden before the sun came up.  At that time of morning, the sounds are Debussy subtle.  Just the occasional chirp of bats out hunting for a tasty cicada.

In the front courtyard, I noticed what looked like a rock stuck under the gate.  But it wasn't a rock. 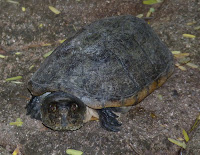 It was one of my favorite animals that shares my garden with me.  A Mexican mud turtle that had made an almost certain fatal decision to stroll on a public street.

I freed it and took it to the other side of the house -- figuring that if it really wanted to get into the street, it would find an alternative route.

The turtles often come into the garden to hunt for food or to lay eggs.  With the water level in my inlet down, it may simply be looking for a refuge.

The spider and the turtle gave me a nice way to start the morning.

The sun is rising over the laguna promising heat and humidity.  And perhaps a few more entries in Steve's Wild Kingdom.

You are becoming the Marlin Perkins of Melaque.

Naw.  Marlin was just the studio guy.  I am more like Stan. The field guy.  Perhaps I can wrestle an anaconda.

The spider still alive in the house would drive me crazy. The turtle, on the other hand, looks very sweet. Glad you rescued him. :)

It is just a spider.  I suspect he has buddies -- and this is just the one I saw.

And even a nod to Nora Ephron worked into our tour of the Wild Kingdom.

Just a spider, the size of your hand, and you think it is not alone!

Melaque is like the Serengeti, most wildlife travels in company.

I saw the same shape blending in with the crowd of crabs on the floor beside my bed (when I peered over the side before heading to the bano late one night), just like chickweed hiding in a new seeding of lettuce.  Being an impatient type I dispatched it with a pocketbook bomb that immediately flattened it. :)

I thought I saw the house was open.  Are you enjoying the lowered shorelilne?

Wait 'til the spider's mamá comes looking for you.

I think of those things as I am wandering through the night with my little light.

That spider was as large as your hand?!?!  I've heard all spiders are poisonous, just some more than others.  That one looks dangerous.  I would of started my day right then.  No sleeping after that.

I should clarify.  The legs had the span of my hand.  That is why I first thought it was one of the land crabs.  I still have not found its carcass -- if it ever did die.  It certainly disappeared fast.

Spiders are immobilized in my house with a blast of cheap hairspray.  All drains wear a rubber sink stopper when not in use.

Most spiders are welcome in my house.  This one looked as if it could steal a sandwich from me.  Unfortunately. hair spray is not a common commodity in this household.