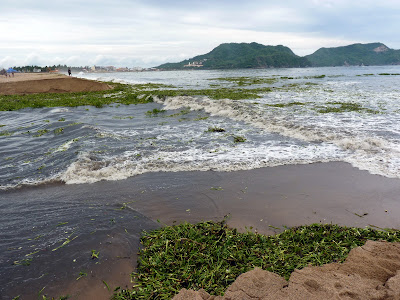 "If you hurry, you can see the laguna open."

It was my landlady.  She who has the best information in town.

The telephone call had interrupted my breakfast, but I grabbed my camera and headed off to the main channel of our wetlands.

She was correct.  The local authorities had bulldozed a gap in the dunes that separate the ocean from the laguna.

Flushing it was.  As if someone had given Mother Nature an over-sized diuretic.

And like a Macy's clearance sale, everything was going.  Water.  Water hyacinths.  Water cabbage.  Entire islands of aquatic plants and tule grass.

What I could not see rushing out to sea were all of the animals that refused to let go of their familiar haunts.  After all, it was their benefit.  It did not matter that there was no future funding.

They did not have to wait to long to be introduced to their future and its cruel realities.  All of the flotsam crashed into the waves.  Some headed out to sea.  But the majority washed up on the shoreline from Barra de Navidad around to Melaque's chicken beach.

Dying plants were mixed with fish, fresh water shrimp, and crabs.  Only the crabs were making a successful escape.

There are always tales of brown snakes washing up with the plants.  It makes sense.  After all, this stuff comes out of a swamp.  But I have never seen any.  On the other hand, neither have I seen any of the crocodiles swept out to sea, but I know they are there because the young men of the village retrieve them and release them in the laguna.

And now the recriminations will begin.

The laguna needs to be opened to avoid flooding.  We have had almost 10 inches of rain since last Saturday.  Almost all of it accumulating in our natural flood plain.  If the dunes were not breached, streets and houses would be part of the flood plain.

But this is a tourist community.  A community that depends on clean beaches to attract visitors willing to part with their pesos -- with all the same economic sensibilities as the village businesses in Jaws.

Unfortunately, it takes more time to clean the beach than it does to release the vegetation.  I suspect the word will soon be out asking beach property owners to rake up the vegetation in front of their houses, and volunteers will show up to cart it off.

Time for me to out on my volunteer hat.

I may get to see one of those brown snakes, after all. 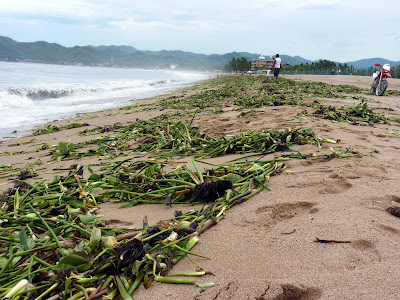 Ten inches of rain!  Wowee.  That's almost two months worth in these here parts of Mexico!  We sure need it.......

I wonder why you are not getting the remnants of ours?  That is what usually happens.  Maybe we are over-milking the clouds.

After all, it was (for) their benefit.  It did not matter that there was no future funding.

Thanks.  Just another of life's little lessons.

Interesting pic of the fresh water shrimp.. Looks similar to a langoustine .. Did anyone try to harvest a few? You would think a little vino verde, a bit of butter, and some chopped garlic would provide an appropriate obituary for these fine looking creatures!
Dan in NC

Wow, what a mess. Better than the alternative though I guess. I just wish you could share some of that rain. Although we have finally had a little.

It is still coming down here.  Maybe we are taking more than our fair share.  So much that we are donating a lot of it to the ocean.

I saw a fellow catching them with a net in the  laguna.  He said he wouldn't eat them because the water is too dirty.  But he sells them to restaurants.  I saw several tourists eating them raw on the beach.

The fresh water shrimp have always fascinated me.  They look like an artistic concept.

A few years ago I was at a nearby hotel doing lunch :) with some friends. There was a long tree branch at the bottom of the pool I was going to dive in for. Later that evening, my friends had a good laugh telling me, a "brown snake" had been recovered from the pool right after I left.

You have seen what I have not.  I have seen only one snake in Villa Obregon -- a Mexican milk snake that looks far too much like a coral snake for its continued urban existence.

Right before I left I saw a red banded, coiled snake, in the front yard. It might have been harmless but I (and the dogs) stood a distance away, watching it.

Probably a milk snake.  Coral snakes do a far better job of staying hidden.  The bane or bare-handed tropical gardeners.  Like me.