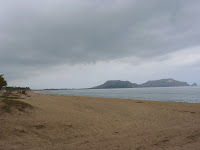 Our days have been hot and humid.

Hot enough to keep me away from my usual walks into the village.  One reason I moved to Mexico was to get out of my truck and onto my feet. (magic in the making)

Well, that has not worked out too well this past week.  If I wanted to go to the village, I took my truck.  With its air conditioned cab.

On Thursday morning, circumstances changed.  We had a cloud cover thick enough to hold out promise for rain -- though none came.  And to act as a large umbrella.  Sort of.

Almost every time I get out of my truck I notice something new that I would have not experienced in my metal rolling can.

Usually small things.  But that makes them even more interesting.

I was walking along one of San Patricio's main streets that fronts the home of a retired doctor.  A beautiful postage stamp estate and garden cloisterd behind the usual Mexican wall.

When I walked by, I noticed a fascinating perfume.  Obviously, from a flower.  But there was nothing on the street that looked as if it could be producing the aroma.

I walked back and forth in front of the wall.  Thinking the flower was on the other side.  Sniffing like  a baboon.  Trying to isolate the source.

Finally, I gave up and resumed my trek home.  But I did not get three steps before I smelled it again.

It was coming from a cluster of tiny, pale yellow flowers on a rather scruffy bush on the street.  And it was not a subtle scent.  The same perfume that ripe raspberries give off when puréed for peaches Melba.

I have no idea what the bush is named.  I know only that the echo of its scent is still in my nostrils. 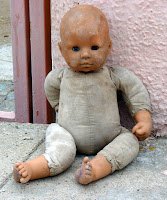 With my scent high still fresh, I walked another half block only to be jarred back to reality by what I first took to be a baby sitting by a gate.  It turned out to only be a doll.

But the type of doll you expect to find in street theater, not in the care of an innocent girl.

I have no idea why it was there.  What it may have meant.  What the significance of the pen marks on the feet might have had.

I simply left it in its isolation.

But I do know the flower and the doll will become part of who I am.  In some small way.  As all experiences do.

Which is why I need to use my sandals more than my tires.

Nice read... Walking is good. We need to slow down and smell the flowers.

Especially those that smell of raspberry.

Quote, "
What the significance of the pen marks on the feet might have had."
This made me laugh, you haven't had children who manage no matter what you do, to get ahold of pens, markers, etc..  The child was probably just making her "dolly" pretty. lol.

How hot is it there anyway, that you are taking the vehicle more and walking less?

The flowers look like jasmine, which have a very strong, sweet, luscious smell.

But are the blooms also open during the day?

Today the weather was nearly perfect.  The problem in the summer is the humidity.  Right now it is midnight.  The temperature is 77 degrees and the humidity is 78%.  The humidity usually rises at night when the breezes die down.

The flowers do look a little like jasmine but you don't usually see them clustered like that. With that many flowers the aroma must be amazing!

I guess all of Mexico is on " rain watch " right now. It keeps threatening with thunder and lightning, but so far no rain.

The last two days here have been pleasant.  With far less humidity.  That means we will probably  e waiting a bit for the first rain to hit.