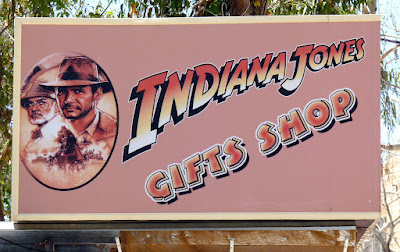 When I told you about my fifth grade dream of visiting Petra, I was very careful to avoid any references (even allusions) to the reason most Americans know of Petra's existence.  The fact that it was a movie set in Indiana Jones and the Last Crusade.

I have nothing against the movie.  Of the four Indiana Jones films it is by far the best with its themes of restored faith and familial relations.  And it would have been a good place to stop the franchise.  Indiana Jones and the Kingdom of the Numbskulls -- or whatever it was called -- was simply an embarrassment.  The only redeeming artistic grace was watching Cate Blanchett in jodhpurs wielding a sword.

My reluctance to make the popular cultural link seemed wise when we stopped to look at the rough terrain surrounding Petra.  One of my bus mates announced in a loud voice that it was all wrong.  We should be able to see a crescent valley.  Just like the map in the movie.

After all, as I pointed out in extra!  boy's expectations exceeded!, Petra existed solely for trade.  The Jordanians are merely keeping the tradition alive.  If Indiana Jones attracts tourists, the Jordanians will give them Indiana Jones.  At least, the horse rentals did not include fedoras.

But there was one more shop that summed up the entrepreneurial spirit of Petra.

Just before we entered the long gorge leading to the city, there is a small gift shop.  With a very odd name.  3 Kings Shop. 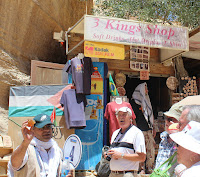 Now the only three kings I know come from the Christian heritage.  You know them.  The three kings of orient are.  The ones bearing gifts for Jesus.

But it was not an ironic bit of humor.  It was an intentional choice.

This little shop sold a gift pack that included gold, frankincense, and myrrh.  A gift pack for the baby Jesus.  Just in case our next stop on the caravan was Bethlehem.  (That is our guide holding up a hunk of frankincense at the left.)

What better testament can there be that free trade can trump religious beliefs?  There I was, standing in a Muslim country, listening to a spiel that is central to Christian belief.

Well, I suppose it could have been named Queen of Sheba Shop.  Where she stopped off to buy gifts for King Solomon on her trip north to Jerusalem.  But even trade may not pierce all hatreds.

I meant to post these thoughts just after my trip.  But other posts have intruded.

So here you are.  A final view of the primary reason I went half way around the world.  Petra.  The stone city of a boy's dreams.

I never knew of the Indiana Jones connection, thankfully.  I've just always wanted to go there.  My granddaughter, whose biological father is Jordanian went when she was a tot.  I was sooooooooo envious.  Some day.

Do it.  The trip was worth every penny.

I believe it was the best of the Indiana Jones series; and I think (not completely sure) there was even an ending credit thanking King Hussein and Queen Noor of Jordan. Of course he is dead after a long rein and she has hooked up with Mexico's very own Carlos Slim.

Off topic but many years ago I read Queen Noor's book and was greatly disappointed. My opinion of her character is not high ...

I had the same reaction to Queen Noor's book.

I bet you can't name the Three Kings without looking at a Bible.

If I looked at a Bible, I could not name them.  Because their names are not there.  In fact, there is no reason to believe there were three.  Other than from the number of gifts.  By that standard, each child must have dozens of grandparents at Christmas.

I have never read her book.  Are there details I should know?  Or should I just read the book?

Like your views on Petra.  Been there twice.  Enjoyed it both times.

I hope to enjoy a second trip before too long.  This time, I will stay for several days.

I simply thought you were presenting me with a trick question.

I would not recommend reading it. It was many years ago so I do not remember all the cons. One problem was her commentary about Israel and Jews - not good.

It sounds as depressing as my arrival in Los Angeles from Dubai.  It is too bad that post disappeared.