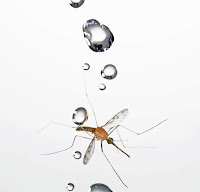 "What any village greybeard knows."

Aleksandr Solzhenitsyn, another of my boyhood heroes, peppered his writing with the phrase.  Whenever he wanted to point out that something was merely common sense.  Especially, when some pretentious academic declared a new finding that common folk had known since time immemorial.

I have long believed that our summer rains have two benefits.  The first I have written about: driving down our oppressive heat and humidity.  But the rain also seems to beat back our plague of mosquitoes.

That "seems" is a recent addition to my greybeard wisdom because it is apparently not based on science.

You have probably all seen the recent headlines about mosquitoes and rain.  I first saw the story in Nature magazine.  "Mosquitoes don't let the rain get them down" is how the "International weekly journal of science" put it.

A study was released earlier this month that asserts that mosquitoes are not deterred by rain.  Not even tropical downpours where they are hit by high velocity drops about every 20 seconds.

And how do they survive?  They simply join with the drop and ride it downward for about 20 mosquito body lengths.  And then disembark the drop.  Like an aquatic Otis.

Those are the lucky mosquitoes.  If the rain drop catches a mosquito perched on a leaf or the ground, the result is fatal.  For the mosquito.  The force of the impact is the equivalent of an SUV dropping on a person.

If Solzhenitsyn had dropped by for tea, he would probably say: "Who cares if a village greybeard would be wrong?  Better yet, what kind of person even asks what would happen to a mosquito in a rain storm?"

The article doesn't answer the who, but it gives us a clue by answering why.  "The team is already expanding its investigations to consider a broader range of conditions, from fog to deluge, which they say could prove useful in implementing mosquito controls for disease or for designing miniature robots that can mimic mosquitoes in flight."  (My emphasis.)

You do not have to be part of the aluminum foil hat brigade to realize that the same futuristic remote-controlled robots that could cure little Jimmie's cancer and grab DNA samples from Osama bin Laden in his compound could also harvest information of political opponents or other law-abiding citizens.  History offers a warning semaphore on the ability of governments to choose wisely.

But the study does help me understand why this afternoon, as the rain continues to fall, that I have been visited by several mosquitoes looking for a quite leg snack.

Or, at least, I think they were mosquitoes. 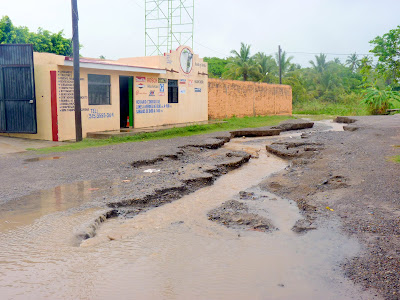 George Orwell's 1984 was largely on-target, except for the date. All that will be highly likely by 2024.  And it will all be "justified" by the war on drugs, terrorism, speeding, etc., etc., etc.

As for mosquitoes, they will still be biting with the same ferocity as always.

Kim G
Boston, MA
Where, thankfully, the cold weather kills off mosquitoes for a good chunk of the year.

Of course, Americans will always find the best use for anything.  For mosquito-sized spies?  No doubt about it.  The private lives of celebrities.  To simply underline how vapid life can be.

Good grief, Man!  You are very nearly a caricature of yourself as you huff and puff about the waste of taxpayer's money.  Soon you'll be going on about today's youth and their lack of morals, and lost patriotism and neighborliness and manners.

My suggestion is that you check the height of those new trousers to ensure they are not cutting off oxygen to the brain.  While you're at it, you may want to check your elastic sock-tops as well.

But those were tomorrow's posts.  I was getting tired of water essays. ;-+

Skeeters are very fond of the rainy environment hereabouts. I wish they were not. Especially in the middle of the night.

They are truly survivors. At the expense of our peace and quiet.

"Skeeters are very fond of the rainy environment hereabouts."

Same here - if they did not like rain they would NOT be here ;-0

Skeeters...can't stand them but nothing a good summer breeze can't handle.  Fortunately, the river current is about 4 miles an hour and I'm not really bothered  at the dock.

I am beginning to think we have the superstars of mosquitoes down here.  Breezes do not seem to bother them in the least.  We are having a mild wind storm right now.  And the mosquitoes are still after me.

I usually have one word for people who keep trying to pin the label "Paradise" on Mexico.  Mosquitoes.