too crabby in the morning? 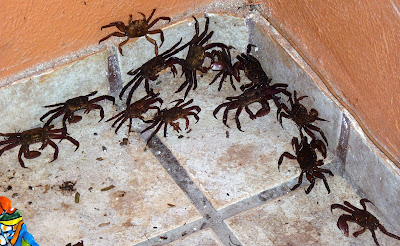 If you refuse to let my people go, I will strike all your territory with frogs.  The river will swarm with frogs.  They will go up, enter your palace and go into your bedroom, onto your bed.  They will enter the houses of your servants and your people and go into your ovens and kneading bowls.  The frogs will climb all over you, your people and your servants.

OK.  So, we are missing a few elements to make this truly biblical.  No chosen people in slavery.  No heart-hardened pharaoh.  And no frogs.

But the theme is there.

It is time for our annual plague of land crabs.  Or mollos, as my neighbors call them.  Those one-gloved Jack Dempseys waving their comic claw in the air like a drunken campesino at the local cantina.

The rains must flush them from the hiding holes.  And we have had plenty of flushing lately.

Last night, nine of the dark-bodied crabs were huddled around my screen in two groups.  5 to 4.  As if the Supreme Court was caucusing on my patio.  Clearly an augury of the fate of Obamacare.  But neither the 5 nor the 4 were willing to provide any portends other than Delphic ambiguity.  That I can get from the newspaper.

This morning the screen door was covered with crabs that had undoubtedly mistaken the mesh for a climbing wall.  Apparently, that is what crabs do after a full night of eating mangoes and mixing DNA.

In the four years I have witnessed this phenomenon, I have never seen this many mollos.  There must have been at least fifty just on the patio.

At night I can hear them attempting to climb up the screen door.  Almost always ending in a distinctive shell-cracking fall.

There is no Moses to shoo them out of our lives.  Time will do that.  In a day or two, their numbers will start to dwindle.  By the end of the month, they will merely be the potential for another post in eleven months.

For now, I simply like to watch their Jerry Lewis-ish tarantula impressions.

Do you walk them back to seaside?

You live (now and then) in a creepy place.

yikes - they are a lot bigger than the ones at our house and also look different. The crabs here in West Melaque that are invading our house are babies, 1/2" - 1". We have thresholds and sweeps on the bottom of our doors and they still manage to get in.

I am now glad I never experienced the rainy season there. Especially after reading about the plague of tarantula-looking crabs.
I have only come upon a few snakes, a frog, iguanas, and of course your friends, the crocodiles, in the laguna.

They live in holes in my garden.

But it is an ever-changing place.

I found one in the garden two days ago as big as a dungeness crab.  I would say it was the king.  But king crab has  an entirely different meaning.

It is almost like living  in an episode of Wild Kingdom.  Without the insurance ads

I am told they are inedible.  But there are gangs of little boys on the anadador collecting the crabs in buckets.

I have to believe they can be good fishing bait.  Ocean dwellers are not usually picky eaters.

Plenty of them ended up in the ocean when the laguna was flushed.  The fish undoubtedly appreciated the treat.

I don't miss them a bit out here in the country.   Haven't seen them since I lived in your neighborhood

The neighborhood boys have had fun either trapping them or stomping them.  Mainly stomping.  The andador is starting to look a bit like crab paste.

I had a crab infestation once.  It wasn't pleasant.

Every year some brave souls make it to my living room. How is a mystery but there they are, all the way on the 4th, yes 4th floor! I scoop them up and carry them to the garden. My favourite crabs are the land crabs which are a blue/pink colour. They are often seen scurrying along the road in the Juluapan peninsula .

I'll bet you laughed a little bit though...

As a kid growing up on the Oregon coast we would bring these home, boil them and paint then with clear mail polish....until we were caught one day with a couple dozen by the warden.  Come to find out they are protected...and carry a $50 fine per crab.  My mother had to go to court and plead for us...I will never forget that day.

Wow, what do you do with them all. Do you herd them all back to the garden or do they eventually go back by themselves?

The big one I saw earlier this week was blue.

They eventually return underground.  It is fun to move around them.  Like herding sheep.

While I type this, a large Mexican mud turtle is making its way across the patio -- panicking the crabs in its path.  This ids a great spot for wildlife -- as long as culture is not involved.

If that was the case here, a group of little boys would spend the rest of their lives in a Dickensian work house.

I thought again about your post last night. Perhaps you have lost your Facebook feed because your posts are too crabby.

Gee, it's like living in a National Geographic documentary.