Last night I was on my way to bed.  My little de-worming experiment had left me exhausted.

While locking the back door, my ant compulsion kicked in.  I needed to ensure the leaf-cutters were not on the march.

I stepped outside, released the screen door, and knew I had made a mistake.  Just as I released the door, I saw something swoop into the house.  Something black.

And a pleasant thought it was not.  I love bats.  But a bat trapped in the house will die.  Leaving the screen door open would merely invite the mosquitoes in, and I would wish I had died.

My experience with chasing bats out of houses is that it is easier to stop the tides -- or to manage attorneys.

I took care of two minor ant invasions while I tried to work out a bat exit strategy.  I guess that would be a batxit.

Step one.  Find the bat.

That should have been rather easy in my house.  It is simply a concrete box.

But after spending about twenty minutes, I found nothing.  I even opened closet doors-- knowing fully well I could exacerbate the situation if the bat decided to sequester itself once I opened a potential escape route.

Without a bat, there was no step two.

So, off to bed I went.  When I turned out all the lights, I heard air movement in the living room.

At least, I now knew where my target was.

I flipped on the lights.  No bat. 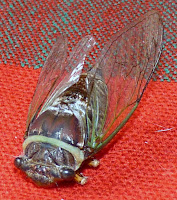 But there was a large flying object.  A cicada.  A big one.  And it was noisy.

I love cicadas.  I find their summer calls to be comforting.  I suspect they remind me of some long-lost memories when summers held promise.

Unfortunately, this bit of winged nostalgia had crossed my path on a night where sleep, and not memories, held promise.  And this insect's noisy infatuation with the light bulb in my wall sconce was not part of my planned peaceful night.

Let me cut to the end of the story.  The cicada buzzes no more.  But it does make a rather good looking corpse.  Almost as if a hummingbird and Marty Feldman had produced a love child.

As a result, I slept the sleep of the self-satisfied.  With dreams of cicadas and bats in a summer garden.
at June 27, 2012

Get thee to the highlands

The bat---he's so cuuuuute!  WOW, big eyes on that other thing.

The bat will consume a LOT of mosquitoes - not that sharing quarters is   comforting at that. We have them flying in and out at the beach - they do not seem anymore interested in sharing quarters than us. They vacate first chance they get. And they are easier to be rid of than the cicadas. Neither situation would drive me to the  highlands ;-)

And miss all this fun?  Wait.  I forgot.  i can dance with the scorpions of San Miguel.

The nice thing about cicadas is there are always a choir of them to brighten up summer nights.

A friend of mine in the UK, a few years back found out that he was a host to a colony of a protected species of bats in his attic! Could not touch the little buggers, and was designated by the local council as a "bat keeper" and required to ensure their safety . A simple butterfly net near the door assists in the relocation of unwanted visitors....so it could be worse - you could, ACTUALLY, have bats in your belfry! (all ways wanted to say that!) LOL!
Cheers!
Dan in NC

It could have been worse.  Bats in the closet!

We have had the experience of crawling on hands and knees and bellies in a sharp, gravel bedded cave stream crawlway, with hundreds of bats streaming past. The reward for such unpleasantness was to be able to climb up out of the stream level to much more capacious galleries, lined with mounds of guano and reeking of ammonia.

(That was in southwestern Missouri, years ago. If we were ever to locate the mysterious cave of Las Cuevas, I would not go in it.)

I see clearly why you want to live in the tropics. You are insane.

There is a bat cave here in Melaque I have wanted to explore, but have not got around to.  I have heard from an"expert" that anyone entering the cave should wear a ventilator.  Not for the smell, but because of some rather nasty organisms that float in the air.

Are there no cicadas in your neck of the woods?  I thought they survived almost everywhere.  We even had them in Oregon.

Cicadas are not a problem. We have bats, of course, lots of them. But I do not invite them inside.

Most meds have side affects.....lol

I have often contended that most things we see in life are not really what we think we are seeing.  Medications just keep the play rolling along.

By the way, I saw a doctor.  And just as doctors do (especially those who run drug stores), she sold me more chemicals.