and the winner is --

Well, it was a close-run thing (as the Duke of Wellington is alleged to have said -- of course, what can you say about a man who is now best-known for rubber boots). The poll is now closed, and a winner has been declared.


First, the disclaimer. This election had all of the safeguards of a ballot in Zimbabwe. And, just like Robert Mugabe, I can declare victory because I like the result. Of course, I am certain there is some doubt about the result due to the delay in announcing the results. I assure you that all of my in-house advisers concur that the process was transparent and accountable.


You sages of the blog (or 36% of you who voted) suggested that I do what I am most likely going to do: rent house #6 for a period until I determine whether or not the Melaque-Barra de Navida area is the place I want to live. If it is, I can then buy a place. 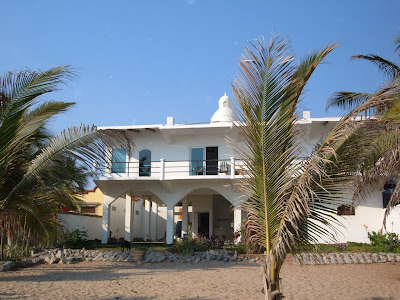 
More than participating in a poll, each of you who left comments has provided me with a gold mine of good information. I will definitely want to talk with each of you in the near future to tease out some of those ideas.


I liked the poll idea. It was another fun way to interact with each of you. Perhaps we can try another one in the near future.
at June 16, 2008

Whew, I'm relieved! Isn't that funny as it really is none of my business.........BUT I do feel like you're a friend. I've seen so many make the mistake of buying and then being miserable and not being able to sell.......at least not in the last two years! So, onward and upward and head south.....of the border, that is!

I guess I misunderstood the poll. I thought the question was "Which house should I buy?" Appears now that it was "Should I buy or rent first?" Of course I would have said rent first.

Wayne -- Just put it in the "butterfly ballot" category. Voting is seldom what it seems. What I liked best about the poll was the information I received in the comments. But, if the house appears to be as good as the pictures, I will be living as close to the ocean as you do.

Babs -- There was probably little chance of me falling into the immediate buying trap. But, who knows? I am going to look at two of the houses in Barra de Navidad when I am down in July.

There is never an end to worrying about things I might do.

Thanks for sharing your process with us. It was kind of fun to vicariously consider various houses in Mexico. Someday I hope to face such a choice in reality, but meanwhile, living vicariously through you was delightful.

One thing, though. You live in a cool climate, and have mentioned being fairly sensitive to heat. Are you sure you want to live on the hot, muggy coast? Just from a temperature perspective, I'd imagine that you'd be much more comfortable in the central highlands.

But I suppose renting on the beach will help you answer that question.

I hope it all works out fabulously wherever you decide to live.

Thanks, Kim. You raise the very issue of why I have chosen to start renting in Melaque in the summer. I want to know how I will relate to the heat. For instance, while I was enjoying our temperature spread of 44 in the morning and 73 this afternoon in Oregon, the temperature in Melaque was 88 -- with 79% humidity. The weather site said the temperature: "feels like 101." That will be the test. That is why I want to start with renting. I do not want to live where I need to rely on air conditioning. At most, I wants fans.

What foreigners say they want when they move to Mexico is usually a 1809 from what they end up with. I can't begin to tell you how many think they want to lead this life of the noble savage, communing with nature and disdaining modern amenities, and who end up rather enjoying better living through General Electric.

I would have voted but the Republicans redrew my voting district line. I will be heard!! I choose #6, too. Might want to be careful being too close to the beach, though. I have a feeling the proximity to the ocean will be directly correlated to the amount of time that your family will want to spend down there :)

Jennifer -- You have the heart of a prophet. I do not have a single friend who believes I can stand a summer on the Pacific Mexico coast without air conditioning. You have known me but a short time and have already smoked out my one environmental weakness. I do not know what it is, but something draws me to the coast -- with all of its heat.

Ladies and gentlemen, may I introduce you to my nephew, Ryan -- the apple of his grandmother's eye, and the never-ending pride of his uncle.