a handful of hope 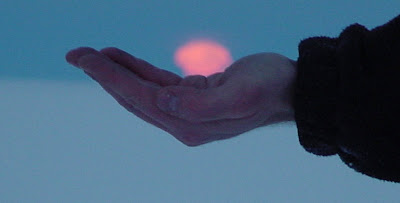 During my youth I would stay occasionally with my grandmother in rural southern Oregon. There were many things to amuse a young boy. Chicks warming in a hatchery. A tool shed filled with ancient lawn mowers and a coffee can filled with assorted bullets. Rows of berries of every imaginable variety.


But what amazed me most about my grandmother was her ability to cook. She seemed to merely gather her ingredients and then add them together without any measuring tools, other than her hands, to create the most amazing meals -- more Jackson Pollock; less Charles Babbage. When I asked her how much of each ingredient was needed, she always responded: "Just enough. Nothing more."

Michael Warshauer (of Surviving La Vida Buena and My Mexican Kitchen) and I were discussing how a basic cucumber salad recipe can take multiple directions merely by adding various ingredients. That is why cooking reminds me of another of my favorite pastimes: jazz. Pick a theme and riff off of it.


I believe it was Nika Hazelton who described cookbooks as Stalinist literature. She considered most cooks, who could not cook without a recipe, as suffering the same handicap as Soviet functionaries who could not make decisions without a five-year plan. I see the evidence of her jibe every day. Customers rushing around grocery stores with exotic jarred treasures asking bewildered grocery clerks: "Where I could I find your rose-infused tofu butter? I cannot cook this great recipe from Bon Appetit without it. By the way. What is it?"


Nika's suggestion was to go to the market and discover what was fresh and in season, and build a meal around those ingredients. She believed that you learned the basics first. Then you could cook anything. Without that knowledge, most cooks may as well try to read Sanskrit as read a recipe.


Nika was the very embodiment of a free market cook. I think of her often when I rush up and down the market aisles, copy of recipe in hand, trying to stuff last season's foods into this week's dinner. Of course, I can hear Jennifer Rose of Staring at Strangers pulling out the pomposity meter with her honest opinion that: "[My culinary talent] extends to yearning for the latest kitchen appliance, acquiring it, reading a cookbook for the plot, and making reservations."
When Nika died in 1992, her good friend Priscilla Buckley wrote:

The bad times were upon her. She had suffered from crippling arthritis for years, and had undergone numbers of operations. Now the pain settled in, imprisoning her in her apartment. But such were her mental resources and her strength that she continued her monthly column; barred from the forays she had made to gather material, she substituted voracious reading, phone calls to her many contacts, memories of wonders past. Her shoulders had become immobile, so she set up a portable electric Smith-Corona on a high table at nearly shoulder level and tapped out, letter by painful letter, the columns that so rejoiced her readers.

I thought of Nika kindly today as I walked Professor Jiggs through the park. Even in our current heat wave, he wanted to make his appearance like some aging Duke who cannot depart the public stage. But his arthritis was as evident today as I have ever seen it. His gait looked just like Nika's typing -- one painful push at a time. Out of sympathy and the misguided delusion that it would be therapeutic, I let him get into the stream that almost drowned him in March.


Deb Hall of Zocalo de Mexican Folk Art included Professor Jiggs's photograph in her blog dogs post on Saturday. It reminded me how much I would like Jiggs to make the trip south. I guess there is nothing equivalent to a cook book to answer that question.


Nika would say: "Just take the ingredients you are given." And my grandmother would add: "Just enough. Nothing more."
at June 29, 2008

Steve, So loved every word of this post about LIFE. Thank you for writing so beautifully. Such a pleasure to read...and reread. May you and Professor Jiggs enjoy a glorious summer Sunday.

Loved this post Steve. Started out reminding me of staying with my granparents on their farm on weekends. Making mud pies in the yard with twigs as candles. Grandma's cooking, fresh cookies in the cookie jar always, taking grandpa lunch out in the field....ahhh, such memories.

Steve - I've heard there is arthritis medicine for dogs...Flash was 16 when she died and it was getting really hard for her to jump up on the bed to sleep next to me.....boo hoo. I had checked into it at that time.......just a thought!
Beautiful blog and I was SO proud to see the Professor's photo on Deb's blog yesterday. You guys are killing me with these blogs on dogs..........Lordy, Lordy!

Deb, Brenda, and Babs -- Thank you for the comments. I think I enjoyed this post as much as any I have done on this blog. Managing to work my grandmother, my dog, and Nika Hazelton into one post was fulfilling in its own right.

Brenda -- I know what you mean about triggering memories. Babs made a similar point in her blog the other day. At times, I think they are God's little time bombs -- reminding us what is important in our relationships with one another.