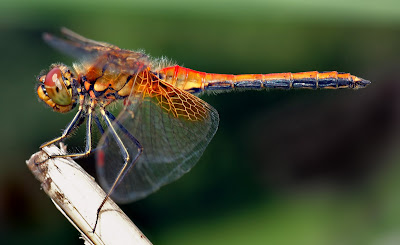 Mosquitoes. They are already being pesky this summer.


I like to read in the back yard in the evening. Apparently, while I am busy digesting the news, mosquitoes have been digesting my blood. The proof? Itchy welts on my ankles. Plus I have caught one or two and reduced them to a smudgy spot -- injectus interruptus, as it were.


A couple years ago I noticed that whenever I am in the hot tub, a column of mosquitoes undulates over the tub. I have always imagined that these were the good-for-nothing-but-mating males back from a day of nectar-swilling awaiting the homeward return of their hemoglobin-besotted spouses.


One evening this week, while sitting in the back yard, I looked up, and there was the cloud. No hot tub. I guess my heat was enough to set off their odd aerial dance.


And then it swooped. I had no idea what. But something came around the left side of my head and one of the mosquitoes was gone. I first thought it was a hummingbird. Then it struck again and again. Each time swooping in from below -- almost like a Great White -- pausing in mid-air while it grabbed its next victim, and off it flew. Over a five minute period, it picked off the entire column.


A dragonfly. I have seen them around streams. But I have never seen them that close playing their helpful predator role.


And even though this one was close enough for me to grab, its speed and the reduced light kept me from to identifying it. You could put five different dragonflies in a lineup, and I would have no idea if it looked like the dragonfly in the picture. But I like to think it looked every bit that glorious.


I also learned a new lesson. During the less than five minutes the dragonfly took to eliminate the mosquitoes, I managed to set aside my copy of The Economist long enough to enjoy the full show.


It makes me wonder what else I have missed in the magic kingdom of my back yard simply by not paying attention.
at June 23, 2008

It starts in childhood. Did you know that dragonfly larvae eat mosquito larvae? You had an amazing experience and I envy you that!

It was literally one of those moments when you merely sit quietly and watch nature take its course.

Isn't it wonderful when we take time to notice those kind of things!.......I am now seeing so many silly characteristics in my cat Velcro and wonder, in all the busy years of my life, how much did I miss? You are SO going to love having time to notice even more when you're retired!!!!

Babs -- There are days I just enjoy sitting and watching the world go by. I am hoping to have far more of them when I retire. Of course, there will also be days when I want to lead the parade.