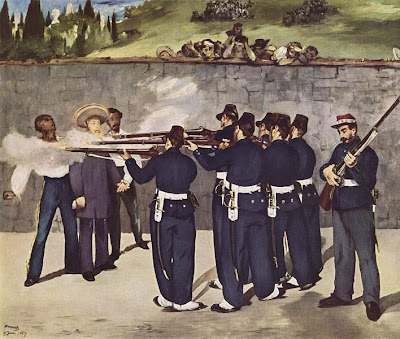 I mentioned yesterday that Billie and Nancy posted comments last week on the current drug war in Mexico. Billie’s piece was "What About the Drug Wars?"; Nancy’s was "México's War on Drugs." At first, I thought the dual posting on the same day was a coincidence until I started taking a look at news stories from last week.


Anyone who did not know better would think that all of Mexico is ablaze with automatic gunfire. As, I told Billie, my mother is convinced that when I move to Mexico, I will either be killed by a drug lord or I will be locked away in a jail cell. I am not quite certain what type of life style she thinks I will be pursuing. But the newspaper headlines continue to feed her paranoid fantasies.


Most paranoia has some factual basis. The Mexican drug wars are no exception. And those facts are simply alarming.


For those of us who live, or who will soon be living, in Mexico, these are not abstract figures. When I drive from the Manzanillo airport to Barra de Navidad, I pass at least one major army checkpoint. And it is every bit as spooky as the checkpoints I have encountered in Northern Ireland and during the last Greek-Turkey war.


There is no sense in being a Pollyanna about violence. Mexico has had an incredibly violent history. Some of that violence has been external -- Hernándo Cortés, Zachary Taylor, Louis-Napoléon Bonaparte come to mind. But the Mexican people are not strangers to committing violence on one another.


A cynic might say that the current drug war falls into the second category – this is merely an internal squabble. But the assessment would be wrong. Most of the drugs controlled by the Mexican cartels are not staying in Mexico; they are on their way north to find their way into American noses, lungs, and veins. Mexicans are dieing to save Americans from their own bad habits.


Other than a few populist politicians, who find it convenient to blame anyone other their own constituents for anything, almost every discussion on the drug wars would agree with everything I have just written. But, for a topic where there is so much agreement, the solution appears to be elusive.


After all of the damage to Mexico during the past year and a half, the results appear to be mixed. The Mexican forces have seized record amounts of cocaine, marijuana and arms, the amount of drugs heading north has not been noticeably affected.


So, what is the solution? Stronger military enforcement? Legalization of drugs? Just ignore it?


We will review some of those options tomorrow.

Nice start. This is going to be a rollercoaster series, I'm betting. There were times on our trip last summer that we were just a bit frightened, having to travel through "drug country". When I talk about all this violence and the drug related deaths to my friends here, they all say the same thing. Legalize pot and cocaine and you have hand-cuffed the drug lords. I wonder what would have happened if Bush had allowed Fox to start doing that a couple of years back?

After more than a year of Calderon’s popular move of stepping up the battle against drugs and the cartels that run those operations there is little to show for it except a bunch of record death statistics.

It seems that battling with rather unorganized (on the surface) terrorists or drug lords is pretty much a losing proposition. I suppose one could argue the good fight etc. But having been through the Vietnam experience I honestly can’t see the gain of that or these battles?

My gut tells me there must be a better way to fight these situations rather than years of skirmishes where there is often a body count attached and little else.

I am in hopes that either technology will create new useful tools to ‘fight’ these wars or the gain will be defused by changing the ‘legal’ status of some of the more innocuous drugs.

It is pretty obvious that the current methods are not working. When the thugs play by different rules and many innocent people get caught in the crossfire it is time to find different ways to fight the wars.

Somehow Ireland and Great Britain figured out a way to settle their religious war of many years. In July of 2005, the Provisional IRA declared an end to its campaign. Maybe there is a model there – but then religion as a premise for war has a different tenor than one based on drugs.

The whole drug thing is too complex to answer in a few words, so I will do this later.

But, one thing I have to mention:
Did you know that there is a checkpoint in the middle of nowhere between White Sands National Monument and Alamogordo on Highway 70/82 in NM?

That was spooky, too...dozens of miles away from the border.

Wayne -- You have hit on an interesting issue. Being around the violence that comes from criminal activity is scary. And being around people who are drugged out is disconcerting. Too much of our drug policy is based on eradicating human nature. Maybe we should start with a policy that people are not going to be remade by law.

Juan -- Declaring war on an unpopular activity is mother's milk for populists. I like your Northern Ireland analogy. We may be able to learn something from that process -- eclectic solutions are often the most practical.

Hollito -- The tandem fear of immigration and drugs is driving the American population to some very odd policy choices.