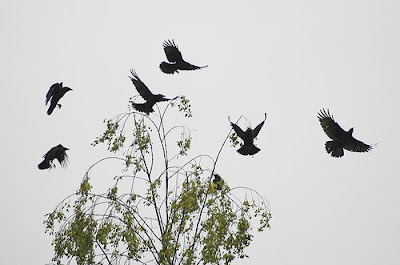 Crows acting up, by Greg7


Crows. Smart as whips. Loud as a water vendor. And when they congregate, they get no smarter. Just louder. Rather like a political rally. But more intelligent.


The crows have put themselves in my cross hairs for one simple reason: at 5:30 on the past three mornings, they have decided to hold congressional hearings in the trees next to my house.


And I am not talking about mere cawing. I am talking trumpets announcing the Apocalypse.


I was positive they had a hawk cornered. Have you ever seen crows gang up on raptors? My first experience was in the woods of our home in southern Oregon. I must have been around 6 or so. I was walking through the woods and heard a crow cawing. Then another. Then another. In seconds crows were flying from every direction. I have no idea how many there were. I was 6. It was a bigger number than I knew.


The reason for all the commotion? A spotted owl. A bird smaller than the crows. But it was a relative of raptors that would eat the crows' food -- and the crows' young.


The owl would sit quietly as the crows cawed and moved in closer. Until the owl decided to fly. It was then mobbed by the crows. I will skip the ending. As you can imagine, the story is not a happy one for the owl.


The only other time I heard that same volume was two years ago when a flock of crows invaded a starling nesting area in the neighbor's trees. The crows scooped all of the young starlings out of their nests and speared them on the ground. I suspect it was another territory issue.


Even though I checked, I have no idea what was causing all the disturbance during the last three mornings.


But it may be related to an incident on Sunday afternoon. I took the dog for a walk. As we walked under the trees where the starlings once nested, two crows in the trees started cawing in distress. I thought it was a bit odd. The dog then started sniffing around one of the rhododendron bushes. Then I saw it: a juvenile crow hiding behind the bush.


The parents started a routine I had never witnessed in crows. Besides cawing, they both pooped on the dog and me, and then started breaking off twigs and dropping them on us. I suppose that was designed to take our attention away from the young one.

Jeez, tough room. Crows always freaked me out. I seem to have a vague recollection of being pecked on the head by one while innocently riding my bike on the next block over. I might have been 10. I don't think I have been on that block since.

So, no way to email you. Um, you might know my sister, Shelia. She worked for the same state insurance fund you do a few years back, but up in Tigard. She has the same last name as I do, and, um, I'm partial to a particular brand of Irish whiskey. Cryptic enough?

jj -- Email: srcotton at comcast dot net.
Babs -- An interesting aspect of the crow parents' behavior is that it works. Even though I had my camera with my, I did not take a photograph of the juvenile crow. I was too fasinated with the debris coming from the tree. Remind me of that the next time I ask you if you had your camera.

My cat Mungo killed a Northern Flicker. The next day, my backyard looked like a scene from the movie The Birds. Mungo was flat on the ground while birds of all variety took turns dive bombing him. There were blue jays, starlings, flickers and crows. I surmised he had accidentally killed the leader of some sort of mafia bird family.