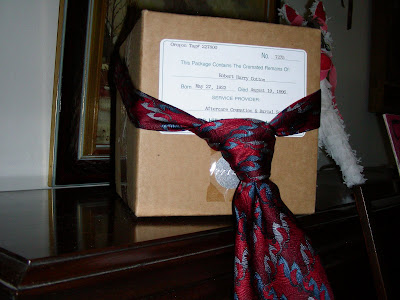 Judy Collins and Billy Collins are competing for my attention -- like two siblings trying to impress an indifferent father. Judy, in her familiar vibrato, wants me to remember that her father always promised her they would live in France -- as if I could do anything about it.


Billy takes a more subtle approach by dragging his mother into the picture to calm his slightly disapproving father.


They both have tales to tell of their fathers.


But they are artists. Certainly their fathers were somehow different than our own. Composers. Poets. Those do not sound like the DNA credentials of our family reunions.


But we listen. Because Judy Collins is describing the same golden memories we like to remember on days like this. And on other days through the year when we realize that we are who we are -- our moral strengths and weaknesses, our view of the world, our very bodies -- because of our fathers.


And Billy Collins captures those grace notes that cause us to smile -- the slight upturn smile we use when we hear a clever bon mot that bares some absurdity or other.


For Judy it was the realization that her father would never take her to Paris, but she would take her children there -- and tell them the tales of their grandfather.


For Billy, it is recalling his deceased parents, and --

Then, all day, I think of him rising up
to give me that look
of knowing disapproval
while my mother calmly tells him to lie back down.

But I am not a Collins; I am a Cotton. So, I recall my father: Bob. How he taught me that I should do nothing unless I wanted to do it -- but I should not want to do anything other than what is moral, kind, and just.


His remains are entombed on the top of my piano. Early tomorrow morning, I will put a Father's Day tie around the simple cardboard box, and he will accompany me to Sunday school and church.


Of course, the box matters far less than the moral, kind, and just soul that will be with me through the day.

[Judy Collins sings of her father in My Father. Billie Collins writes of his father in No Time.]

"His remains are entombed on the top of my piano. Early tomorrow morning, I will put a Father's Day tie around the simple cardboard box, and he will accompany me to Sunday school and church."

I love that! I think your father will be so proud to sit with you in church today. He's raised a good son.

Was that his favorite tie?

islaholic trixie -- The tie is mine. But he would have borrowed it.

jj -- I know that I will be proud having him sit beside me. I took him to his grandson's wedding. He was the life of the party.

You are "one in a million"! AND your Dad in a box, is JUST what I have told my kids I want done with me - although I would prefer a pretty feminine vase. I don't want to miss out on one darned event, after I'm gone! My kids just roll their eyes at me.......I'm glad you're Dad is on the piano.........sweet melody!

Babs -- Thanks. I just enjoy having him there. I have left Dad in the box because that is what he would have wanted. An urn would have been far too high falutin' -- and funereal.