the liberator, the fortress, and the wardrobe 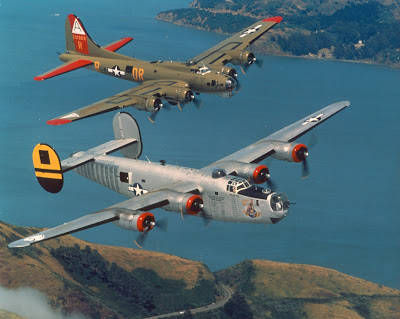 The sound was unmistakable. Four powerful engines staining against gravity. I ran out the door just in time to see the belly of a B-17 -- right over my back yard. About 10 minutes later, I heard a different sound, but just as loud. This time it was a B-24. The Wings of Freedom tour was in town.


I have often wondered what it must have been like living in World War II America. Much of what we take for granted simply had not yet been invented.


But one invention was beginning to come into its own: the aircraft. Commercial aircraft were still a novelty. But most people had never seen a big airplane.


That all changed with Pearl Harbor. America was in the war. And America knew how to do one thing extremely well: build things. Some of the most amazing products of the 1940s were the series of bombers that were literally stamped out -- in the thousands -- to defend this country's freedom.


What I experienced in my back yard was repeated across the country. People stood in awe as flights of aircraft were delivered from production to staging grounds.


My first experience with a B-17 was in 1958 when I was nine. A local entrepreneurial hero, Art Lacy, had the brilliant idea of mounting a full-sized, four-engined airplane on top of his small Texaco gas station. For my brother and me, climbing into that B-17 was almost like slipping through the wardrobe into Narnia.

The B-17 is still there, but only memories live there: access was blocked off years ago. In fact, the gas station portion of Art's empire is also gone.


But those memories came alive again as the shadow of the B-17 briefly passed over me. Fifty years later and I still stand in awe.

Are those planes housed at McMinnvile at Evergreen? I hear Del Smith has quite a collection including the Spruce Goose.

The ride on the B17 was amazing. We flew low over the Willamette Valley and after months of rain and gray clouds, I was able to appreciate the beauty of the area, especially the patchwork of the farm lands.

Two things made the ride special for me. First, riding on the plane with my dad. Two years ago, his health looked bleak. But he has bounded back and with the help of three strong men, we were able to get him in the plane. Once we were airborn, the flight engineer gave us the sign that we could move about the plane and explore the various stations. I was worried about dad standing but, again, the flight crew helped him to his feet and we stationed him by the window with the machine gun attachment. There have been few and far between moments when I've seen him this excited about something. (My dad is a Vietnam veteran, but he is a WWII history buff.)

The second thing that made the trip special was one of the other passengers, a retired Lt. Col who actually flew the B17 in WWII. He was shot down over Germany and tried to hike into Switzerland, but was captured and held as a POW. This was his first flight on a B17 since then. You could see his eyes light up as he stood behind pilots during the flight. I can only imagine what memories that was bringing back for him.

I'm not sure what it is about these airplanes that evoke such strong emotions from people. Visitors of all ages and backgrounds were mesmerized by the aircraft. I think for me they are symbols of a bygone era; and era when there were noble and just causes for going to war and where the whole country sacrificed in order to ensure victory.

I could not have said it better myself -- because I was not there. Thanks for sharing. I wish I could have seen the sparkle in your dad's eyes.

Babs -- The bombers are not from Evergreen; they are part of the Collings Foundation. As you know, I love the Evergreen museum, but seeing the bombers in flight added a new level.

Seeing that picture of the Bomber brought back so many memories of living in Milwaukie. After visiting the Air Museum in Hawaii last month, I have a whole new appreciation for the events at Pearl Harbor.
Sure glad you started blogging. I look forward to reading it every day!

Colette -- Good to hear from you. I never thought I would be one of those people who communicates with friends through a blog. But here I am.