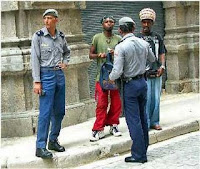 I am convinced there is no perfect solution to the drug problem. Whatever course Mexico and the United States take, there will be costs and benefits. The trick is to weigh the alternatives to determine if the current policy provides the most benefits with the least associated costs –- or whether some other option would be better.


Here are some additional facts everyone should be able to accept.

The question is how much are we willing to pay for what benefit?


We could try the Cuba model (pictured above). What is going on right now in Mexico and the United States is a variant of that model. Cuba outlaws drugs. In Havana, there is almost literally a policeman on every corner. In every neighborhood, there is a monitor who knows everything that goes on and who is doing what. Cuba does not have much of a drug problem. Of course, it does not have much of anything else, either. And there is quite a difference in opinion between the Cuban leadership and the Cuban people about the attractiveness of the Cuban model.


Before anyone accuses me of committing the error of moral equivalency, I will point out that I am not saying that the current Mexican drug lord eradication is the moral equivalent of the Cuban model. Quite the opposite. Neither the United States nor Mexico have committed anywhere near the amount of resources to match the Cuban model. And morally, such a commitment would be wrong. I have been shocked to read that some Mexican citizens are so upset with the cartels that they would welcome a permanent army and police presence in their neighborhoods. The Cuban model offers high benefits for even higher costs. Mexicans and Americans are not going to pay that price.


There is, of course, the status quo. Some Americans want drugs. Drug cartels are willing to meet the market demand. The American and Mexican governments want to stop the flow of drugs. That angers the cartels –- and the fight ensues. Decapitated bodies. Fatherless families. Bullet-sprayed walls. They are bad enough. But the greater victim is a society that appears to be unraveling where the cartels have their greatest influence. And even if a cartel is broken up, it is just the cost of doing business. A new cartel will appear or another cartel will fill the vacuum.


That model relies on the unfortunate vocabulary of war. No one is really fighting a war against drugs. The war is against drug commerce. And how would we ever know when we have won that type of war? If it is a war, it has the same fuzzy objectives shared by too many modern military adventures. We may as well declare war against being overweight. (Of course, that idea is probably not as outlandish as I think it should be.)


Another option would be to pretend that the problem does not exist. In effect, that is what happened for generations in the United States. And there was more than just a little social and racial discrimination in that attitude. After all, the only drug users lived in public housing or were jazz musicians. Americans got upset only when middle class kids –- or, more accurately, children of middle-class voters –- started using drugs. By that point, organized crime had cornered the drug market and had learned the art of speaking to power with money. (Need I make the point that crime and corruption began first in the United States. Our taste for drugs has merely spread the symptoms.)


Leaders like President Calderón have chosen not to allow their countries to continue down the road to perdition. But, Mexico cannot act alone. It needs help to either fight the drug lords with military power –- or to be the beneficiary of a more radical approach: legalization of drugs in America.


And that will be tomorrow's topic.

One only needs to look at Rosarito, just south of Tijuana, to see what can happen to a booming community when the druglords take over. Once a thriving tourist getaway for Mexicans and swarms of Gringos from just across the border, the town has almost turned into a ghost town now. Scary stuff.

As Holito suggests this is a complex issue(s). The peripheral circumstances that contribute to the drug problem are many.

I don't think stepping up policing and taking away still more individual rights are going to solve the drug problem.

There must be a more holistic approach that includes the many aforementioned issues.

Juan -- Talk about shooting the monkey. You have hit on the heart of the matter. No one talks very much about the root causes of the drug issue. I suspect that if society could eliminate every external variable (your list of horribles, for instance: "poverty, poor education, peer pressure, street crime and gang mentality, unconscionable greed, years of unending wars, no moral compass, depression over bad conditions, feelings of hopelessness"), we would still be left with a large group of potential users who feel the need to chase the dragon. Somewhere along the line we need to accept the fact that some people make bad decisions. Declaring war on them seems a bit overzealous to me.

Wayne -- Thank you for the example of Rosarito. I recently talked to a couple who live in a gated community. Their response to the drug wars? "Doesn't bother us. We never see any of it." Perhaps Marie Antoinette is not dead after all.

As you suggest Steve there will always be a user element out there - but educated casual users as the main body might make legalization an easier prospect - again very complex.

It is interesting to note that Afghanistan now has more poppy fields to produce heroin than it did before the U.S. invasion - maybe all those bombs tilled the soil for them out there?

During the Fox Administration the Mexican congress seemed close to legalizing small quantities of pot and some other tolerances - it seems that Bush connected up and demanded that not happen.

I am not suggesting Fox was a Bush puppet - but he did always seem stiff when he was hanging out with Bush?

It is hard to characterize drug use as a victim less crime - there will be arguments about that for sure - rightly so I think.

A drug is simply something you ingest that affects your state of mind. Booze, chocolate, etc., are drugs. Yes, they are. There are alcoholics and chocoholics. I once was borderline former and still am borderline latter.

Neither is illegal (in most places) and therefore there is no horrendous crime and violence associated with them or other legal drugs (coffee, etc., the list is long).

If you legalized "drugs," the crime and violence would vanish. You would still have people with "drug problems" as we have alcoholics and people with chocolate all over their face. But you wouldn´t have the cartels.

This miserably failed "war on drugs" began in the United States, of course. The puritanical capital of the world. Sad state of affairs.

Michael -- Your point about the definition of "drugs" is well taken. While writing these posts, I had the recurring problem of trying to find a term that defined illegal drugs while distinguishing them merely from controlled substances and not confusing them with the drugs we use in our daily lives: Advil, caffeine, sugar. Half way through the project it occurred to me that the definitional problem merely reflects the fact that, as a society, we have no real drug policy -- other than, perhaps, "this good, that bad." And for this, brave men and innocent civilians are dieing. I do not get it.

Not only do I support legalization of all forms of drugs, I'd never vote for a leader who hasn't done some, at least once. There are much better things for the governments of both countries to be doing than regulating what private citizens do with private lives.