tub with a view 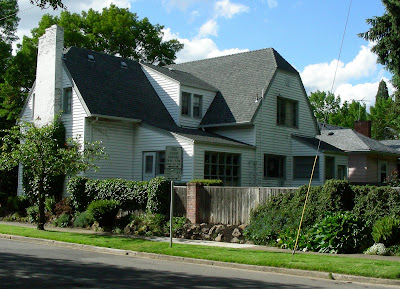 Summer may have finally come to Oregon. One robin a spring may not make, but half a week of sun is a Pacific northwest season.


I trundled out to the hot tub with a bottle of water, mango ice cream, and The Economist. It is hardly a hedonist kit for a high time, but it is my idea of a relaxing evening.


Tonight I tried something different: I did not turn on the jets. I decided that I would do what every creative writer teacher tells freshmen at the first lecture: before you can write, you must learn to observe.


So I leaned back and listened to my little urban garden.


Amazingly, there was very little traffic noise. There was the hum of a few small cars, and the inevitable macho orgasmic THUMP THUMP THUMP of some twentysomething advertising his Freudian shortcomings.


The other sounds were far more subtle.

Three crows carrying on their witty exchanges at full volume, sounding like drunk dons at a faculty party.


Two scrub jays engaged in what may have been a domestic dispute, only to be drowned out by the trills of a sparrow, willing to hold his territory against the arguing George and Martha in search of their own Edward Albee.


The swifts merely twittered and soared waiting for dusk to generate the krill of the air.


And one robin made a darting cameo appearance sounding a warning call -- either too late for the early worm or too concerned to wait around for the sharp-shinned hawk to return.


I would expect the bird songs and calls to mix. In an Aristotelian world, all will blend with their nature. But even the hum and THUMP of the cars seemed to join in this sonata.


While listening to those sounds, I failed to notice that a breeze was creeping in. It may be the first time I really noticed the difference in sounds created by each tree.


The cottonwood almost a block away produced a full-throated rustle -- as if yards of crepe were given free rein.


The ornamental plum produced a flapping noise, and my giant spruce -- the back bone of my garden -- provided brush strokes.


Subtle and repetitive, but with their own melody. Almost as if Philip Glass had forsworn orchestras for oak and wisteria.


To listen is to write.


[Sad note from the author: This may be the last posting from the hot tub. It appears that the heater has given up -- quit with no notice. We will need much more summer before a cold tub is an adequate substitute for a dead hot tub.]
at June 14, 2008

Now you are freaking me out!! We have a hot tub on our patio and I often sit in it just to think. Hopefully our heater won't go out!!

"The swifts merely twittered and soared waiting for dusk to generate the krill of the air."

Man, I wish I could write like that. Maybe I should shut up more and listen!

Wayne and Barbara -- Thank you very much.

islaholic trixie -- I stuck my hand in the water this morning. I will not say it was cold, but I found a deck chair from the Titanic floating on the surface. Off to the shop to price a repair.

Sometimes I do what you did. Just listen to the world. Unfortunately, I can't write as eloquently as you about what I have heard.

Billie -- Thanks. It is awfully late in life for me to relearn the virtues of simply listening. But I am finding life to be far more pleasant when I take my hands off of the steering wheel.

Steve,
What? Did Oregon have summer without me? I am in Florida and should not be missing any good Oregon weather! It has been hot here but most afternoons cloud over and have been stormy.
You should here the birds in the trees here where I am staying. I was going to just turn my camera on video just to capture the sounds the other day.

Jackie -- Rush home immediately. The weather is great. Of course, it is: Rose Festival was LAST week. It is hardly a heat wave. But it is 65 degrees with a clear sky. Professor Jiggs thinks it is too hot. But it is a perfect day for yard work and just sitting with a good book. If you stay away much longer, you may miss it.

Not to change the subject, but I AM, what was the final tally on the houses on the beach? Just like the swifts, I'm "all atwitter" to know!

I was going to publish the results this morning, but the current post jumped queue. A father's day post blocked it out tomorrow. But the official results will show up on Monday.

Only my trusted advisers will know.

Oh, the polls are still open? How much is it worth it to you to get the desired result? My team and I, with the help of some macros, got Charlie elected Aug. Dog of the Month at http://www.freewebs.com/dogcontest/. Since our efforts crashed their server, he remained DOTM in perpetuity.

jjr -- The polls are long since closed and the ballots are stored in a safe spot. I will give everyone a hint -- my likely choice came out on top, but not by much.

Monday -- all will be known.

You better check the ballots for hanging chads.lol

The ballots have been properly manicured and pedicured. And every vote will count -- and be counted.